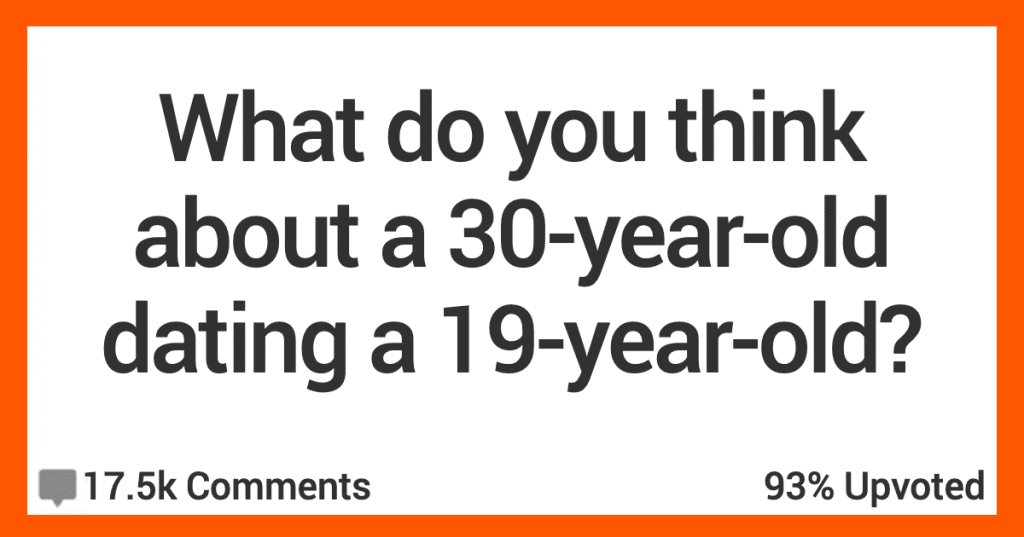 Hmmmm, I know how I feel about this one…but I’m gonna bite my tongue so my personal opinion doesn’t get in the way of what you or the folks below have to say.

22-24 right outta college, not really settled down yet and still partying like they’re in college etc. and don’t know what they want.

I know not the same for everyone but that’s the main reason.”

I (18m) met her (30f) when I was moving into the apt she was moving out of. I was going to school and she, into assisted housing. We were together about a year, and were talking about marriage when my parents asked me to come home, alone one weekend.

Stepping away helped me to see all of the possibilities. A fiery breakup ensued. Looking back, the age separation was one of the smaller issues. This was when I learned to walk away. She was done having her adventures. I needed to have my own.”

“Honestly it’s your life and you don’t have to justify it to anyone.

As long as you’re not hurting people do as you please at your own pace!”

Then when you’re older and you look at someone that age, there’s no way I could ever imagine even considering someone in their early 20s; let alone a teenager.”

“It reminds me of the one story from Sam Morril where he talks about how his one friend had a really cool dad who s**ked weed with them, and how as a kid you’re like “wow this guy is so cool” but from an adult’s perspective it’s very uncool to s**ke weed with children.”

When I was 20 I thought I was plenty mature. Looking back I was NOT. There has been a number of things on which our being at different life stages was a much bigger deal than I would have anticipated.

I was very lucky that he is a generous and thoughtful person. It could easily have been otherwise. And without much life experience, I would not have known the difference quickly enough to not get hurt.

The difference really isn’t fair to both parties. It’s a rare situation where it works out ok. I wouldn’t count on it.”

I’m 24 now and even at this age I’ve started to realize how disgusting it would be to try and date someone that young.

I would never in a million years think it would be ok for me to date a teenager, let alone at 33??”

“As a 30 y/o, I have no interest in going to the club or bars or ragers, but I’d never want to hold someone else back from those experiences if they wanted them.

It’s just a matter of lifestyle.”

Married for 24 years, most of them miserable for me. I guess the simple reason is that I grew up and changed, and he was already grown and stayed the same.

We’ve since both moved on to much more compatible partners, but he still says, “I never should have married someone so young!””