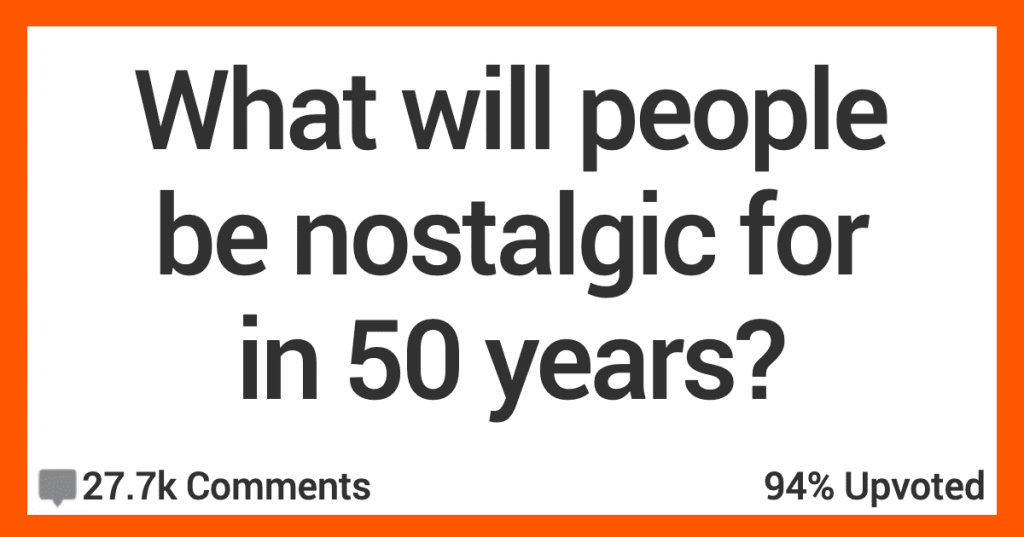 I’d like to think that civilization and the planet will be in a much better place than it is now, but who really knows…humans are pretty unpredictable…

Check out what AskReddit users think people will be nostalgic for in 50 years.

“Owning something you don’t pay a subscription for.

Or owning something outright.”

2. I hope this doesn’t happen.

“You know son, when I was your age we didn’t have a subscription model to make toasts every morning. We’d just put bread in and toast would pop out”

“You had to put bread manually, Grandpa?!?”

“Oh yes, but we didn’t have to listen to 3 mandatory advertisements. Oh and one more thing: We could use any bread we want”

Even babies are overexposed today.”

“Movies made 30 years from now.

“Being able to do basic maintenance on your car without needing a shop manual and a years salary worth of special tools.”

Not because it’s good, but because whatever comes next will probably suck more.”

“The number of wild animals that exist and can be seen.

They are already on the decline.”

“That one month when everyone was playing Pokemon Go.

That PoGo summer was basically the opposite of the pandemic.”

“Clean air and water depending how things turn out for the planet.

If things get better, The Simpsons.”

It will seem old fashioned and from a simpler time, in 50 years.”

My Mum speaks about how every winter in the 1970s, there would always be massive amounts of snow that would stay around for days.

I’ve only had 2 times in my life where snow has stuck around for a day. The rest of snow days would either never stick to the ground or it’ll stick, but it’ll melt away within the hour.

It’s rare that we get snow.”

I remember even in the ’90s after a drive through the country your car would be covered in squashed bugs.