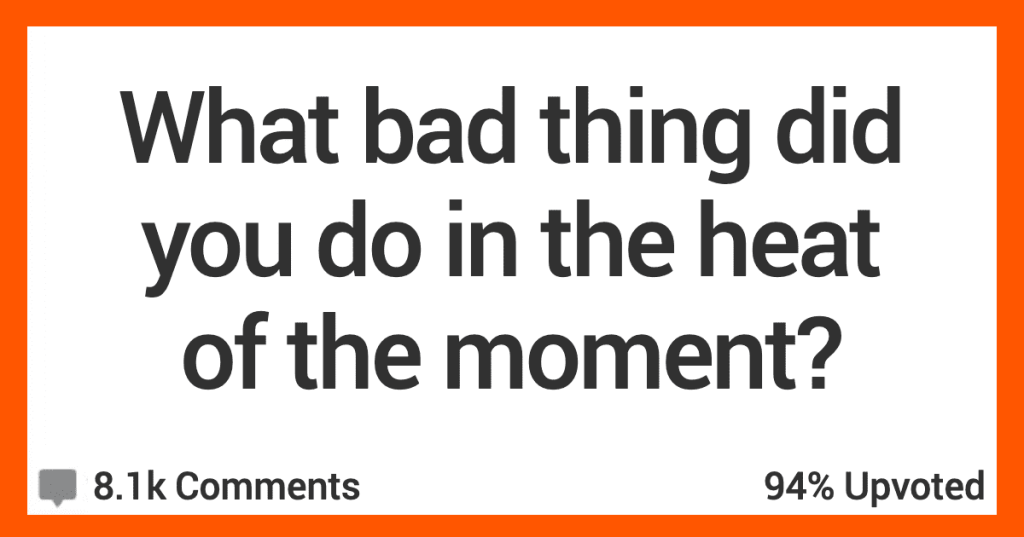 What’s the Worst Thing You’ve Done in the Heat of the Moment? Here’s What People Said.

So I’ll let you use your imagination about what happened…yikes!

But we all have those moments that happen in the heat of the moment that we’d like to take back.

“This is gonna be a sad one.

So my best friend at the time wasn’t doing very well, had to move back in with his parents and had no job. I, being the general manager of a fast food restaurant, got him a job at my store. This dude was terrible. Messed up on every order, wouldn’t listen, and would complain about everything.

Finally one day he came into work dr**k. It was pretty obvious so I had to fire him. After I did he was just staring at me with this f**ked up look and wobbling. I stupidly let my emotions get to me and said “you look f**king disgusting” right to his face.

I remember he looked down at his shirt for a stain or something, then I vividly remember his face as he realized I wasn’t talking about his clothes, but himself as a person. He looked so destroyed by that. Without saying another word he turned around and walked out of the building. 30 minutes later he shot himself in the head at his house.

Will never forget the sound of his mom when I called her literally minutes after he d**d. Will forever haunt my dreams. People say don’t blame yourself and all that s**t. It’s kinda hard when you were the last person he spoke to.

I know if I didn’t say that he probably would have done it eventually anyways because we all knew he was struggling. But since I knew; I definitely shouldn’t have said that. I’ll at least always believe I heavily heavily influenced his decision.”

“I play guitar in a bar band.

One night many years ago, after a gig while loading up our equipment, some dr**k guy decided he wanted to pick a fight. We tried to brush him off, but he wouldn’t relent. Eventually, things got physical and I ended up having a scrap with him. I defeated him handily, as he was very dr**k and I was not.

He did not accept this result and went to get some of his friends. They came back and attacked us from behind. Again, they were defeated. Only this time, I was very p**sed off. People were dragging Mr. Dr**k and his pals away from our trailer when I spotted his baseball hat next to our back tire. I was so fired up that I picked it up and held it in the air to show it to him, then dropped it on the ground, exposed my penis, and p**sed all over it in front of the crowd of people that had gathered.

It felt very powerful in the moment… Until the police officer that the venue called (to help us deal with these f**kers) walked around the corner and saw me standing there with my d**k in my hand.

Two victories followed by a crushing defeat. Tough night at the office.”

“I almost k**led a classmate in high school.

I was in wood shop and the first string varsity quarterback jokingly threatened to r**e my little sister. I was a scrawny dude who was borderline anorexic, but I tackled him through a wall and held his head to a mitre saw. The shop teacher pulled me off of him.

Frankly I’m surprised I was only suspended for a week. I’ve never been a particularly angry person. A life of getting bullied and a**sed sort of teaches you to let things roll off your back. But in that particular moment I fully intended to k**l him.

The wild thing was he and his buddies continued to antagonise me after that, all the way until graduation. If anything they got worse instead of backing down.”

“Girlfriend cheated on me in high school. Girlfriend’s temporary boyfriend had a friend who keyed my car.

She told me who did it and I decided the best way to handle it was to take a plunger stick and go into his job at the mall and beat him in the face with it until the stick broke.

Not my proudest moment.”

I worked on campus a long time ago, and we were having some retreat over the summer where they dropped like 200 kids off to stay for like 5 days. Lots of problems were being caused by them not respecting anything, and just being stupid kids. I was getting super annoyed with them, especially since I worked in the library, and they would not shut the hell up.

Anyway, fast forward to like, day 3. I leave work and see my car covered in branches, leaves and other floral debris. I. was. p**sed. I was seeing red, and just looked at the kids across the street in the commons yard, and just unleashed unholy hell upon them. Yelled so loud I was echoing across campus. The vein in my forehead pounding so hard my ears burned.

The kids were scared, I was p**sed, and my boss was so concerned, he asked if I needed to take tomorrow off to cool down. I told him I was fine, but these kids were on my last nerve. Anyway, like 5 years later, I was telling one of my best friends this story, and he dropped a bombshell on me.

It wasn’t the kids. It was him and a fellow friend of ours. They wanted to prank me since they knew the kids were driving me crazy. I probably stared at him for like 2 solid minutes before saying “I told those kids if I caught them anywhere near my car, it would be the last thing they’d do.” Then I started laughing. lmao, got me.”

“I told a kid who was relentlessly b**lying me that I wished he wasn’t even alive.

He k**led himself a week later.”

“I said “I h**e you” to my dad once when he moved to California to help our family since we were poor.

I was a little kid and never understood but he passed away in California so those were my final words to him.”

“Dude pulled a g** out on me and my friends at the park across the street from my moms house.

He pushed the g** against me hard (bruises on my ribs and neck) then finally walked away and said “Hope you learned your lesson!” to which I responded “What lesson?!” so he came back and shoved me to the ground and put the g** in my mouth and asked me again if I learned my lesson, to which I said, “Yes.”

He didn’t pull the trigger obviously, no clue why I had to say something while he was walking away.”

“I was in an extremely heated fight with my girlfriend at the time, like literally screaming match. Worst fight we’ve ever had. In the heat of the moment, I told her to drop d**d and slammed my front door.

The next morning i woke up feeling absolutely horrible, and i got ready to go buy her some flowers and say I was sorry. As i was heading out the door, i got the phone call informing me she d**d of al**hol poisoning at around 2:00 in the morning. I almost didn’t survive that. I didn’t leave my room for a month, had to be forced to eat and drink water.

I felt trapped, drowning in my own sea of guilt and self-hatred. I was banned from her funeral by her family too and i wasn’t allowed to know where she was. I still don’t know where she is or if she was even buried or cremated. I’ve since moved on and I’m in a relationship with someone i love so so much. But, she will always have a place in my heart, and i still think about her sometimes.”

“Lost my virginity to a pr**titute.

I was 24 and was in a long distance relationship with a girl from Germany. I’d pretty much never had any experience dating until then and after 3-4 months we made plans to finally meet up.

I paid for her plane ticket and the day before she was supposed to fly out she told me that she had feelings for someone else. I wasn’t really keen on the whole open relationship thing so I cut my losses and broke up with her. Never managed to get the money back but fortunately it wasn’t an absurd amount or anything.

Problem is I was extremely nervous and couldn’t finish. We went at it for half an hour or so until I realized it just wasn’t happening. I awkwardly apologized, grabbed my clothes and did the walk of shame back home

Felt a lot of shame and embarrassment for a while, but at the end of the day we were both consenting adults. There were probably better ways of handling the breakup though.”

“18 in the Marine Corps, another guy threw me under the bus and I got punished for something I didn’t do.

A couple months later he was dr**k and mouthing off to me. I pushed him down 3 flights of stairs. No yelling, no screaming and when he finally arrived at the bottom, with help, I tossed him out into the hallway where someone would find him.

Someone did find him and got him to the hospital. He recovered………eventually and due to his blood al**hol level they surmised that he was dr**k and fell.”

“My sister wasn’t very confident on a bike.

My parents got her and me new bikes one summer. We went out riding and got into an argument. I jumped off my bike, pushed her off hers, then stomped out the spokes on both her wheels.

This was 20 years ago. I still feel like s**t about it, and she hasn’t rode a bike since.”