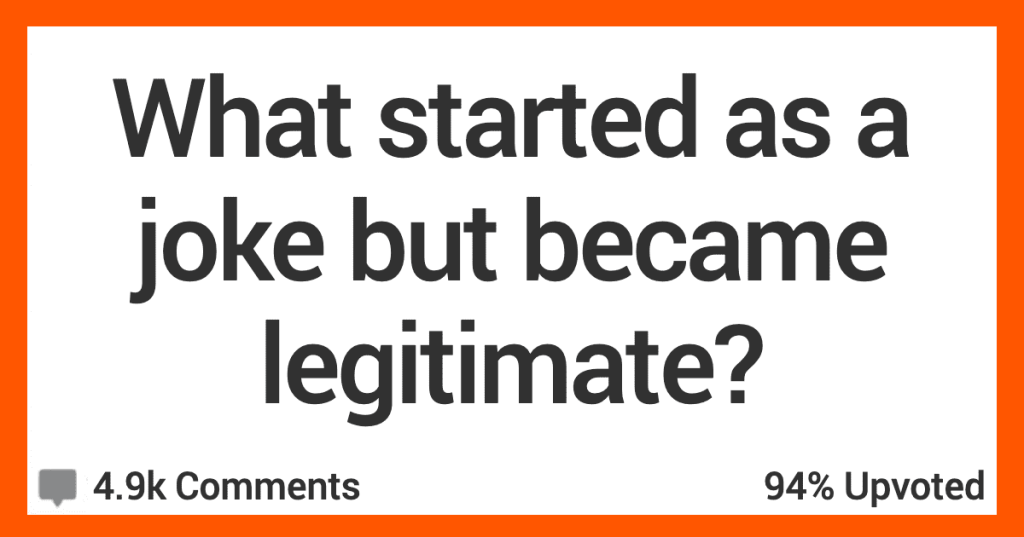 What am I talking about, you might be asking yourself…

Well, I’ll tell you: some things do indeed start out as jokes and then turn into something legitimate.

And today we’re going to hear from AskReddit users about this phenomenon.

Started because a cook was mad at a customer sending back scallop potatoes and now the most popular snack in the world.”

I start copying teenagers’ new slang as a way to make fun of it, then notice that it’s slowly slipping into my everyday vocab the more it happens.”

A comedian who started a parody country star gimmick playing up all the stereotypes of the genre.

Only thing is he actually made good songs and a demand grew for him. 4 albums and 4 tours later and it’s his main gig now!”

When I was young, it was more or less a cute saying, but now it’s a uncomfortable reality.”

One year they were predicting a lot of snow. In my area most years it just rains. I joked that on the snowiest coldest day I would barbecue. I wake up there’s a ton of snow on the ground and I get a call from the office to take the day off. So I said screw it. I went to the store bought charcoal and all the stuff to have a barbecue.

My roommate and I were grilling and we had neighbors checking to make sure our place wasn’t on fire cuz of the smoke from the balcony. It was a lot of fun and it amused me to grill on a “not a nice day” but I thought it was beautiful and a perfect day to enjoy the snow and grilling.”

“Pokemon GO started out as an April Fools Google thing.

“If I’m right, the whole “eating Tide Pods” was originally just a joke/meme about being the forbidden fruit/snack.

But then teens started eating them for real for internet views.”

I have two great friends named Karen and their names have been completely commandeered into a derogatory term.”

9. Funny how that works.

You guys can fight me on this but I remember when it was new and everyone only used it ironically to make fun of people who genuinely used it.

Eventually the jokes got more intricate, people became more fascinated by the trolls, and everyone stuck around long enough to watch it go from a giant joke to the most popular source of entertainment and social media.”

Then he was really elected. He is no joke anymore.”

“Pirates of the Caribbean.

It was a movie based solely on a theme park ride… and a pirate movie (pirate movies as a genre had been fully written off as always being terrible at this point) but it turned into a multi-billion dollar franchise. Multiple other movies got made based on rides afterwards but only Pirates worked right.

Also wanted to note, that objectively The Curse of the Black Pearl is a perfect movie for its storytelling, worldbuilding, and sense of fun and entertainment. (I’m not a huge fan of the series, The Film Theorist on youtube broke down why and honestly i can’t disagree).”

Started off with a group of friends meeting up after school to s**ke at a specific time.

Is now a universal symbol for s**king weed!”