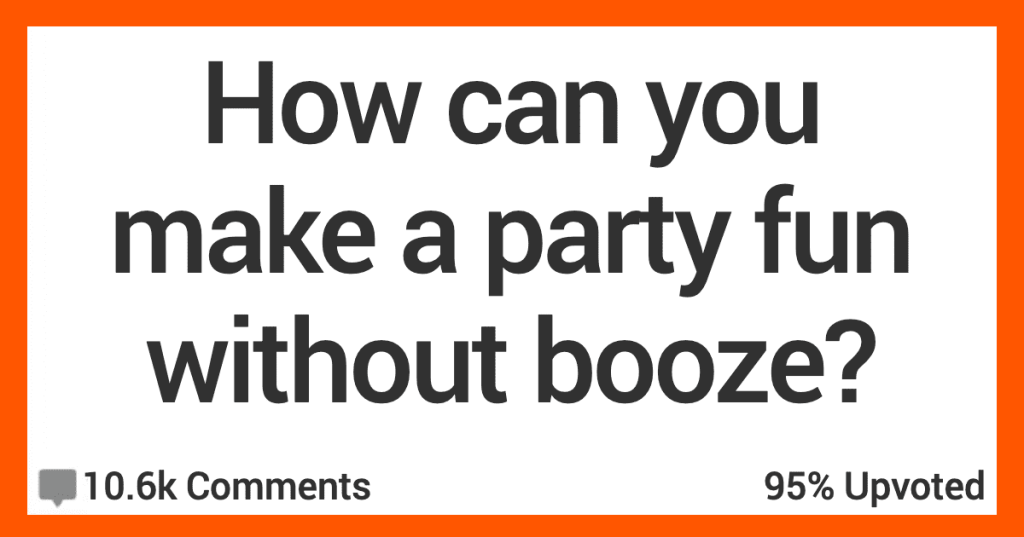 Hey, who says you need booze to have a good time?

And today we’re going to get some good ideas about how to have a fun party with absolutely no juice.

“Those trivia app games you can connect to your TV.

“I went to this party with go karts and they made a whole race track with disco lights, music, and hay, and it was honestly the best party I ever went to.”

“A bag of bulk wigs.

Just discretely place the bag of wigs on a couch or coffee table.

“I invited a few couples over (some of them pretty religious and don’t drink) but we played Adult Mad Libs.

It was hilarious seeing them break out of their shells and just belly laugh at some of the things we all would come up with in that game.”

I had some neighbors once with a pool, and his dad would cover the watermelon in Crisco and see who could hold onto it the longest.”

“Some of the best adult parties I’ve been to are kids parties after the kids fall asleep.

If you want to see adults playing like kids and laughing their a**es off, rent a giant bouncy slide and one of those carnival games with the spinning ladder.”

“Do a M**der Mystery night.

Invite as many people as you know, get everyone all dressed in old garb, turn off the lights, m**der Gary in the dark, then call the cops.”

“I was at a party recently where someone brought a game called Monkey Tail.

It’s so ridiculous and fun, we were nearly in tears.”

“Secret Hitler (or I guess any comparable game – but Secret Hitler is my favorite) can get competitive and fun and is good for many rounds of action.

I think the shame of losing spurs people on to want to keep competing because the fictional stakes are so high.”

“Cards and board games. The one time we were on a tea shop my cousin brought a game, I think it’s called Resistance if I remember correctly.

That’s still one of my fondest memories ever and we stayed at that shop until it closed at midnight. It’s so good we didn’t notice the time.”

“Get a giant roll of blank paper, like the back of wrapping paper, and tape it to the back of the bathroom door. Hang a sharpie marker near it. Everybody who uses the bathroom gets to anonymously write graffiti.

Make it themed, like it has to be poems, or for a good time call ___, or as a host, don’t say a word and see what happens naturally. When I was in college, we did this and some comments turned out to be f**ing insanely hilarious.”

“Simple party games are great for that.

It’s good to have a couple of people that can inject some energy and fun into playing the games too – encourage interaction.”