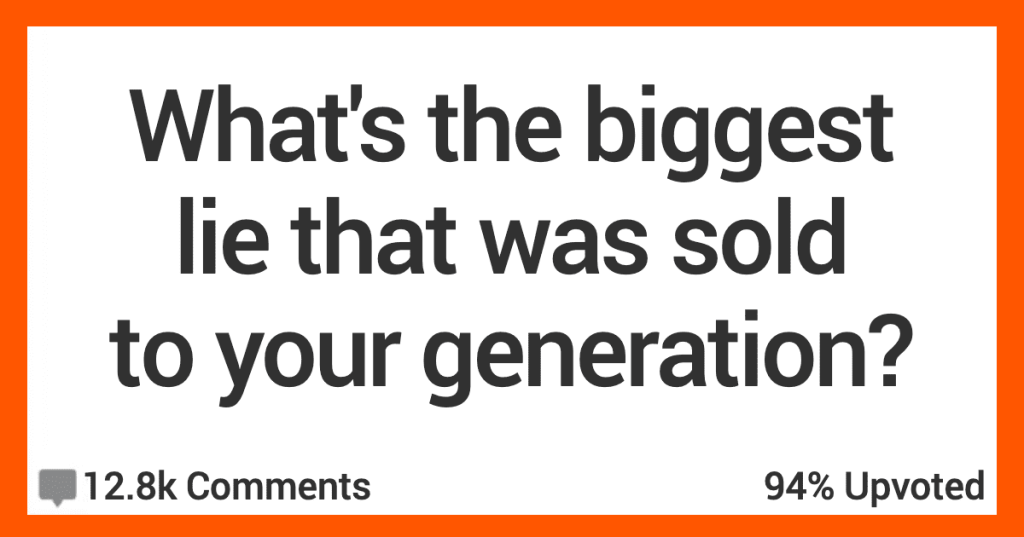 Every generation has lies sold to them and I think the biggest one sold to my age group was that you MUST go to college in order to succeed in life.

While I think college is great for a lot of people, it’s not for everyone…not even close.

But that’s just my opinion.

Let’s hear from folks on AskReddit about what they think are the biggest lies sold to their generation.

“The push for plastic recycling was 100% initiated by petroleum companies.

It was a myth used to sell oil.”

“All you have to do is go to college and you’ll be successful.

Though it was less of a lie and more just being wrong.”

“You can have it all.

That both parents can work, go to school, raise kids, have time for their marriage, and have hobby time.”

“Drinking an obscene amount of milk because otherwise you’ll have weak bones from lack of calcium… brought to you by the Dairy Farmers of Canada.”

Between the removal of the Fairness Doctrine leading to extreme and overt media bias leading to people living in echo chambers, phrases like “fake news” negating inconvenient facts and halting critical thinking, and Gerrymandering being legal cheating is obviously the American Way.

Sadly, few people even realize it and when presented with the facts cannot accept them because generations of Americans were brainwashed into blind faith in the American system and its fairness.”

That we would all d** in a Nuclear War, Russia vs The USA

That the USA were the good guys in Iraq, Afghanistan, etc

I’d say those were the big two.”

“”Get any college degree or you’ll be poor.”

“Get a student loan, the degree is worth it.”

“Get a STEM degree or you’ll be poor.”

“Finish your Masters, a Bachelors is just like a Highschool diploma now.”

“Get a PhD, only way to be competitive.”

“College is a waste, you should have done trades.”

“Haha Millennials have tons of student loan debt and a worthless degree.””

It’s bulls**t, most of my problems could be solved by money and I’d be so happy.”

“I suspect “crime doesn’t pay” is a lie told to more generations than just mine.

Second of all, 90% of rich people are criminals and we all just kind of accept it. E.g. through breaking labour laws. They tend to break laws in ways that save them money, rather than earn them money, but it still ends up in crime absolutely paying.

Edit: people seem to think I’m on about drugs or theft or other ‘obvious’ crimes that come with prison sentences. I’m talking about crimes where the punishment is a fine, and the fine is of lower value than what the person made (or saved) committing the crime. E.g. getting a fine in the thousands after profiting in the hundreds of thousands. Low risk, high reward.

Take any rich person and Google their name with the word ‘fines’ e.g. ‘Bill Gates fines’. Then consider how many times they’ve done that without getting caught, and how many times they made more from the crime than the value of the fine.

“Find your dream and persue that, don’t do any other activities.

You can be happy without doing your dream job and you can change path during your life.

You can be happy without evolving your passion to a career.”

“The war on drugs. It has decimated the lives of so many people. Minorities are disproportionately incarcerated for their possession.

My generation was taught that all drugs are bad and that there is no use for them in the medical community. Science is proving that many drugs that were classified as illegal are beneficial for treating a multitude of health issues.

It’s time that we end the war on drugs. People should be treated for addiction in a medical facility rather than being incarcerated.”

“GenX – Probably that hard work will pay off. That companies are looking to invest in their employees.

I would say up until the .com bubble, there was some truth in it. By 2002, it was more of a “lets see how much blood we can squeeze from everything.””