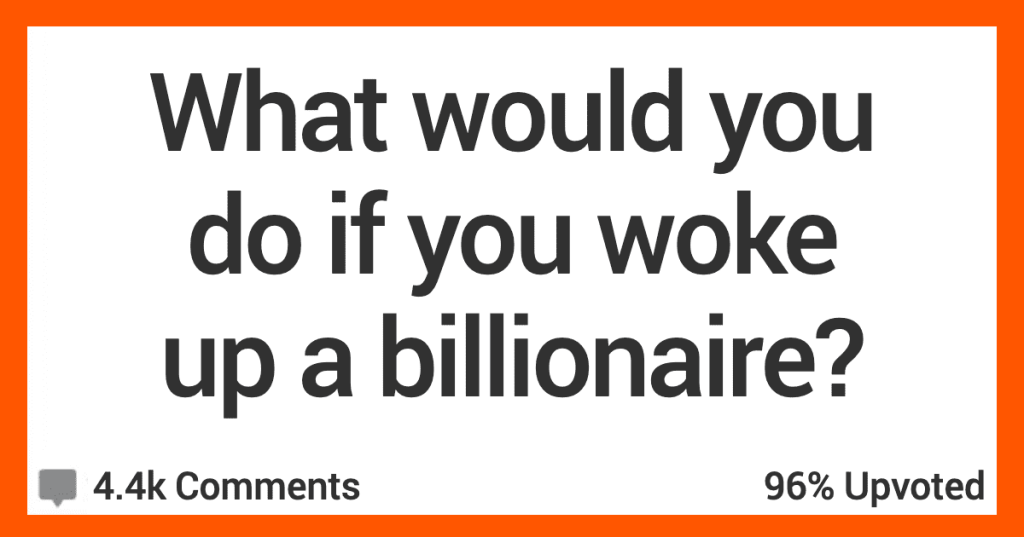 If I woke up as a billionaire tomorrow, I’d change my name, buy false documents, and leave the country, never to be seen again…

Okay, I wouldn’t go that far, but I’d move somewhere and take some time to sort out what my next moves would be…

What would you do if you woke up as a billionaire?

Check out how AskReddit users had to say about this.

“Slice off a few million, give it to your family members, then disappear forever.

Buy yourself a private island and live tge rest of your days in opulent luxury.”

“Travel for some time, then I’d buy a house somewhere where I can build a smokers hut, I’d start a small kitchen – a pub – something like that.”

“Pay off my debts

Pay off the debts of close friends and co workers

Pay off the debts of casual aquantances

Pay off the debts of people I used to know

Take rolls of 100’s, get someone to drive me around in a car. Sit in sunroof and just chuck rolls of money at people.

Like, idk, I can make insulin and sell them to America at some profit, but not in a way that gouges people. I can buy real estate, use it in a way that makes everyone else’s property value lower and by doing so, making the area cheaper for others. With that kind of money, I can buy off politicians to make rules that makes me not richer, but other rich people significantly poorer.

“Schedule oral surgery to get teeth that don’t cause me daily pain or are at risk of literally killing me from the ongoing infections they cause.

That would literally be the first thing I do.”

“Invest it smartly, become a multi-billionaire, use it to fund the adaptation of a bunch of webcomics I like into shows.

Enjoy the fruits of my labor.”

“Sign up for the fanciest country club in the area then take all my redneck friends for a round of golf.

I dont eve like golf just thought it’d be fun to see their faces.”

“Pay back parents and get new fitted clothes. Set up a fund for kids, grandkids and great grandkids for college.

Save up all the money I’d want to ever have and spend. Rest of my time after that (which I assume might take a week or so) I’d have no job so prolly do what I do every weekend and do service (habitat for humanity, spending time at the local charity thrift shop, canned food drives etc.)

Otherwise, take time to go through college (engineering/management/law) and go out to bars meeting chicks every so often. A lot of extra will go to philanthropy or saved for people who would otherwise not be able to afford s**t they need. Not all though, I’m not perfect, I’d use money I have (responsibly).”

“Buy my husband the local NFL team, because he always says he could run it better and they would be in the Super Bowl every year.

This will be his chance to prove it.”

“Fund institutions dedicated to destroying the modern conservative movement simply by exposing it for what it is.”

That’s more money than I could conceivably spend in a lifetime. I’m not interested in amassing a lot of expensive possessions.

But the idea of being able to spend the rest of my life retired and exploring the world is tremendously appealing to me.”

“First, I go to the largest law firm in the city I want to live in, to a legal professional that is completely unconnected to me prior to this, and I retain their services and get whatever advice they have.

That advice notwithstanding, I then pay the taxes. On $1 billion let’s assume for simplicity that it’s a flat 37% tax, so I lose $370 million, leaving me with $630 million. I put pretty much the entirety of this in an S&P 500 index fund, probably slowly over time to offset any big fluctuations. So now all the taxes and the placement of the money is done.

Conventional financial wisdom says that you can draw about 4% of your total net worth annually without negatively impacting your principal balance and growth. That’s about $25.2 million per year. I will be a bit conservative even with this, and divide it by half, giving me $12.6 million per year.

This, I cannot stress enough, is an unwieldy amount of money to manage, because the FDIC insured limit is $250,000 per depositor, per bank. I may set up several “just in case” accounts at the four major banks, and keep those checking accounts topped up quarterly. I would probably get one of those fancy AmEx Black cards.

$250,000 per year, on its own, is enough to live on, and to guarantee myself a life of absolute worry-free comfort. The me of right now, living my current life and knowing what I know now, would like to think that I would continue to live modestly, remain my humble self, and not go overboard with crazy personal financial excess. I would pay my taxes without trying to squirrel away the excess or exploit a ton of loopholes. This would already be more than enough for the rest of my life, so what do I care?

Anyway, I would buy a nice home for me and my wife — not a mansion, but a reasonable home that suits our needs and is not a pain in the a** to maintain. I would make sure we always have a reliable car in good condition, and I would definitely splurge and have the best PC money can buy.

My home would probably have a really dorky office/game room that I can go all-out on. I would set up trusts for the people who are important in my life. Let’s assume this all takes up the first entire year of $12.6 million or whatever (minus the 20% capital gains tax I would pay — at least, I think that’s the amount, I’m a bit fuzzy on how that would get calculated).

From that point on I would live normally (such as it is), off my $250,000 per year (give or take). I would set up a household bank account that pays all reasonable recurring living expenses, and then two more accounts for me and my wife to each have an ongoing “allowance” to do whatever we want with. That’s enough money to meet all needs, have great insurance, eat well, travel, and pretty much do whatever we want to do.

I would wield the excess ~$9.8 million each year (again minus taxes) as a means to effect some sort of positive change in the world. As someone who does not have access to this kind of money, I cannot even really conceive of what that would specifically mean or what is actually realistic, but I would look seriously toward stuff like ending medical debt for as many in-crisis people as I could, or helping to establish better mental health care policies for my country.

Most critically, I would tell very very few people what has transpired (my wife and my father and no one else), and I would continue to live normally and maintain my relationships. Friendships change and get screwed up when you have money, and I would do everything in my power to avoid that.

Now if this came with the cost of “and everybody knows you’re suddenly filthy rich,” yeesh, I dunno. I feel like that would be a bit of a monkey’s paw scenario.”

What would you do if you woke up with that much cash?