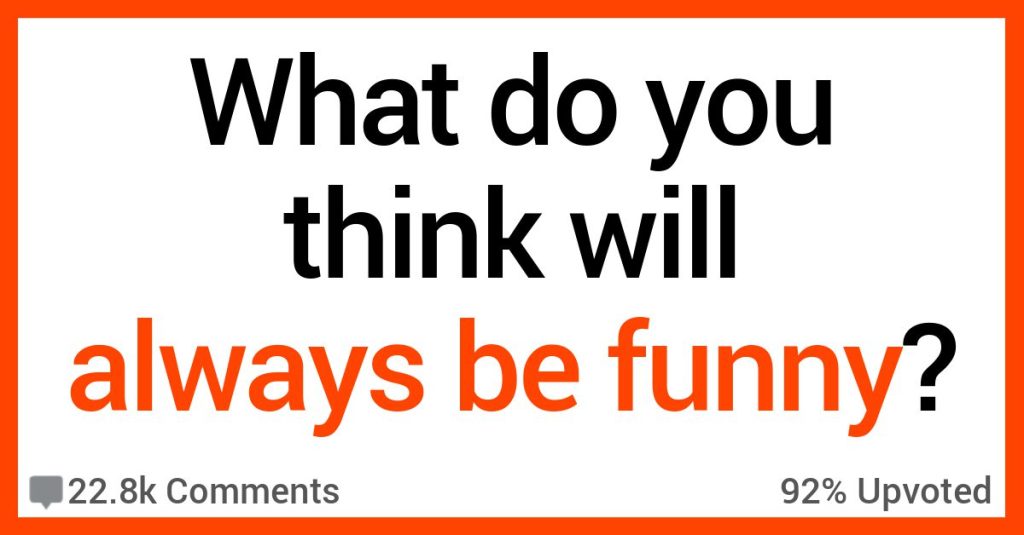 12 People Talk Share Things They Think Will Always Be Funny

I know that this is kind of rude, but I just can’t help it…

Every time I see someone trip in public, I laugh.

I’m not talking about when people actually get hurt or anything like that, but when someone trips a little bit, I just find it hilarious.

People on AskReddit talked about what they think will ALWAYS be funny.

“People slipping and falling down…

But not getting seriously hurt.”

And The Naked Gun.

Leslie Nielsen is the best.”

A crazy concept that was made at a precise moment in history where it was allowed to not only exist, but to be loved.”

He goes until he’s panting ever time because he’s so balls to the wall.”

“Everything is a thousand times funnier in a Catholic mass. I remember going to the funeral of a distant relative when I was a kid.

The priest started talking about how my relative is now in heaven and knows no pain or suffering and blah blah blah. There was an old man sitting directly behind us and he just kept saying “WooOoOooow” at the end of the priest’s every sentence. My sister and I made eye contact and my mother gave us a look that would k**l on sight and said “Don’t. You. Dare.”

I honestly thought I was going to explode from holding in the laughter. Had to dig my nails into my arms to stop myself.”

Hardware stores are gold for this stuff, you walk past the stud finders and say to your partner or kids “I can’t go down there, I’ll set them all off again”

I have some stud adhesive from a renovation project, can’t throw the bucket of it out. When my wifes in the shed helping me move stuff I ask her to hold it for me and then I pretend it’s stuck to my hand. She’s not divorced me so far.

Screws and fasteners aisle “Wouldn’t go in there, looks a bit screwy”.”

“Every time I think about this story or try to tell it out loud, I laugh uncontrollably.

My finance told me this story of when he was kid at the beach with his family. He was eating one of those sugar cookies with the frosting on top (US) and his mom had just told him that was the last one. Well these happened to be his favorite cookies in the whole world and he was stoked he got the last one and not his brothers.

He began to jump up and down and raised his cookie hand in the air and said “I. LOVE. THESE. COOKIES!!!!” While pumping his hand up and down with each word. Right on his last thrust, a seagull swoops down and rips the cookie right out of his hand. He starts crying. Everyone starts laughing hysterically.

It took the adults a long time to realize he had been bit by the seagull and actually required medical attention, but still. Laugh every time.”

“Dumb and Dumber where they’re in the heart shaped hot tub.

“She wrote me a John Deere letter…”

Some comedy only happens once in a life time.”

“Rickrolls will never stop making me laugh. There’s something hilarious about seeing someone get Rickrolled STILL and after all this time!

I remember when it was first happening and it was hilarious. I even fall for it occasionally and I always laugh.”

“We were at a hotel and had gone down to he breakfast buffet with my 3 yo son. The only table available was wobbly and we warned 3 about it. Set the bowl of cereal with milk down in front of him.

He leaned on the table, the whole table tips over, he falls forward out of his chair, the bowl of cereal goes flying thru the air and lands on his head just like a cartoon. He was so upset and I couldn’t keep it together.

I felt like a s**t mom till I looked and my husband was laughing too. Kid still gets pi**ed when we bring it up. Probably doesn’t sound that funny in writing but I’ve never seen anything look more slapstick in my life.

Makes me giggle just thinking about it.”

“Whene naked Ken Jeong popping out of the trunk. We all knew it was way too early in the movie for them to find Doug.

But I can safely say none of us expected a naked Korean man to appear & start beating the s**t out of people with a tire iron.”

What do YOU think will always be funny?