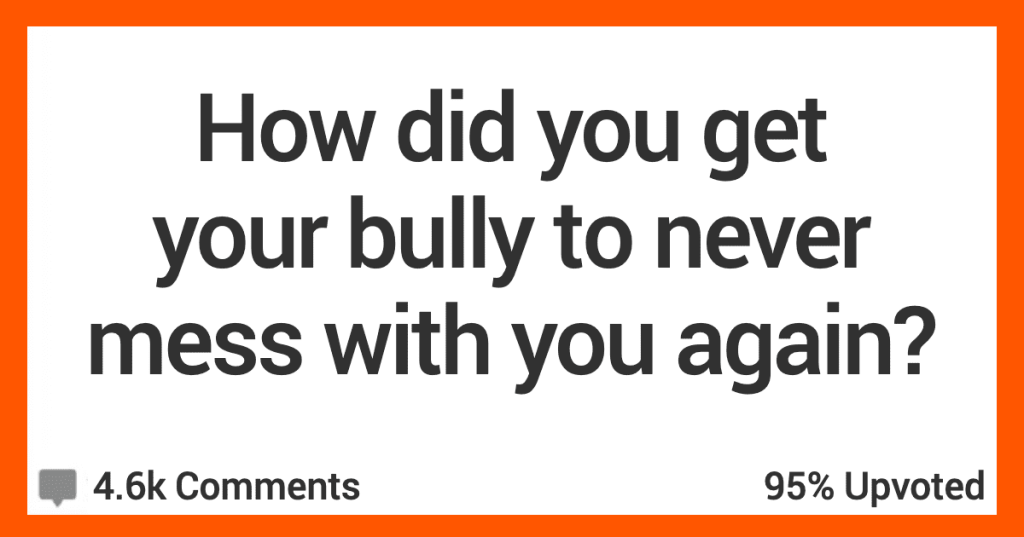 People have different feelings when it comes to how to deal with bullies.

Check out how AskReddit users succeeded in never their bullies never mess with them again.

“A group of sociopaths from my school that always tormented us followed me and my friends to my house one day in a pick up truck. They stole my friends shoes, pushed one of them until she fell, and took my sketchpad and threw it in a puddle.

My step brother came outside, beat one of them badly, stole his pants, and threw his keys into a sewer grave before hitting him with an empty vodka bottle. It was traumatizing for me on both ends, but that group of kids never even looked at us again.”

“He tried to shove me down an embankment while on a field trip. Had I fallen, I would have broken my leg or worse, because the embankment ended about 25 feet down, then dropped off into some deep brush and trees.

Anyhow, my best friend was next to me, and said “Watch it!” as he came at me. I side-stepped him, and he tumbled down the embankment and over the edge into the brush.

Fractured several ribs, dislocated his shoulder and broke his ankle. He never did anything to me again. F**k you Darren! You b**ch!”

3. These are my friends.

“Made friends with the football team.

Bullies think twice when you are buddies with a 6’2″ 250 pound Samoan.

Crazy how nice so many Samoans are.”

“In my French class a guy who sat behind me would always kick my chair repeatedly, and I was at the point where I was visibly infuriated by this happening every lesson.

The girl who sat next to me turned to him and said “Hey, you should probably stop doing that, he looks like he’s about to hit you.”

Guy laughed it off and said I wouldn’t. I didn’t, but I turned around and cocked my arm back. He was leaning back on the hind legs of his chair with his feet on mine, so when I did this, he flinched, fell backwards off his chair, and got a few laughs from the people behind us.

He never kicked my chair after that.”

“I pulled a piece of hair out of her head and smacked her face against the ground.

Later on I heard she liked me which is why she messed with me for two years before I had enough.”

“I either befriended them or befriended other kids who are bigger/stronger and didn’t mind protecting me. In my experience, most bullies are lonely and sad. I would just try to make them laugh and that usually worked. That said, it doesn’t always work and you have to stand up for yourself sometimes…

One time in elementary school, two kids who liked to bully other kids took my lunchbox and started playing “monkey in the middle” with it. I played along for a minute, running back and forth… but it just kept going.

So I started sprinting at the kid who threw it, like I said I would. He tried to run away while yelling “I don’t have it!” but I tackled him to the ground which knocked the wind out him. After I stood up, I looked at the other kid who has my lunchbox. He just walked over, gave it back, and said “sorry”.”

“This slightly older kid was always a huge bully, just total d-bag for nothing. I went home and told my dad about it and he said “next time he does something, punch him i the face, and if you do, I’ll take you to a baseball game.”

Next day at camp I was minding my own business on the 4 square line, he came up and said something and I punched this f**k right in the face. He was shocked, never said one bad thing to me ever again, and let me cut him in the 4 square line in my next turn.

It was actually a great life lesson on how to stand up for yourself. I didn’t start going around picking on kids or needlessly beating people up, but I never was bullied again. And yes, my dad took me to a ballgame.”

“Hit him in the face with a water bottle.

For some reason I couldn’t stand up for myself, but he started bugging my friend. It was during after school band practice (which my mom forced me into anyway, I already didn’t want to be there).

For some reason him teasing my friend just made me slug him full force in the face with said (plastic) water bottle. That got other students and the teacher involved. He didn’t bug us again.”

“I kicked him hard in the balls in the middle of history class sophomore year. He had all of the guys in our grade moo at me in the hallway when we’d change classes.

I put up with it for a week until I snapped and started beating the s**t out of him with my history book. Got him up against the wall and kicked him as hard as I could. Legit don’t remember kicking him, but I remember my foot was sweaty which is snapped me out of it. The teacher made us both go in the hallway and explain what happened so I told him everything. Surprisingly I never got in trouble.

The next year I had to sit behind him in homeroom, and one day he just randomly turned around and apologized. I apologized for kicking him and he said he totally deserved it. Senior year I made everybody in the class Christmas ornaments with all our names on them and he got all teared up when he got his.

“I recall when I graduated elementary school and moved on to Junior High School most of the kids in my class came from a different school. As a shy outsider I got shunned by pretty much everyone.

One kid took that as an invitation to start picking on me. I probably could have just punched him, but I didn’t like fighting. I did like to draw so I began drawing horrible cartoons depicting him as this fat, gluttonous idiot who would inevitably end up mutilated by the end of the story.

Those cartoons became extremely popular in the class and that kid ended up having a really sh**ty time at school.

Looking back on it with adult eyes, it definitely went too far.

He grew up with all those kids but he wasn’t popular and I think he thought bullying me would finally be his way in with them. After the cartoons they all ended up bullying him to the point he didn’t come to school for a couple of weeks.

Part of me regrets what happened, but the other half of me still feels he got what he deserved.

I guess the final lesson in all this is, kids are a**holes.”

“Middle school. The bully challenged me to a fight after school. I told him to meet me on the soccer field which happened to be visible from where my bus home would park.

I made sure to get out of school as quickly as possible and sat on the bus so I could clearly see the field. As I expected, he never showed up.

The next day at school I announced loudly so several classmates could hear “Jason, you never showed up for our fight. I waited there after school and you never showed up. You are a f$&%# chicken”. That was the end of the bullying.”

“A bully was harassing my daughter on the bus.

Instead of calling his folks, or jumping on him, I did this…

I pulled him aside at the bus stop one day and asked for his help. “Hey Danny. I was hoping you could help me out. I guess there’s a kid on the bus who is picking on my daughter. She’s a girl and small and I’d like for you to help protect her. If you see anything like that, could you stick up for her please and let me know about it.”

That was the end of the bullying.”