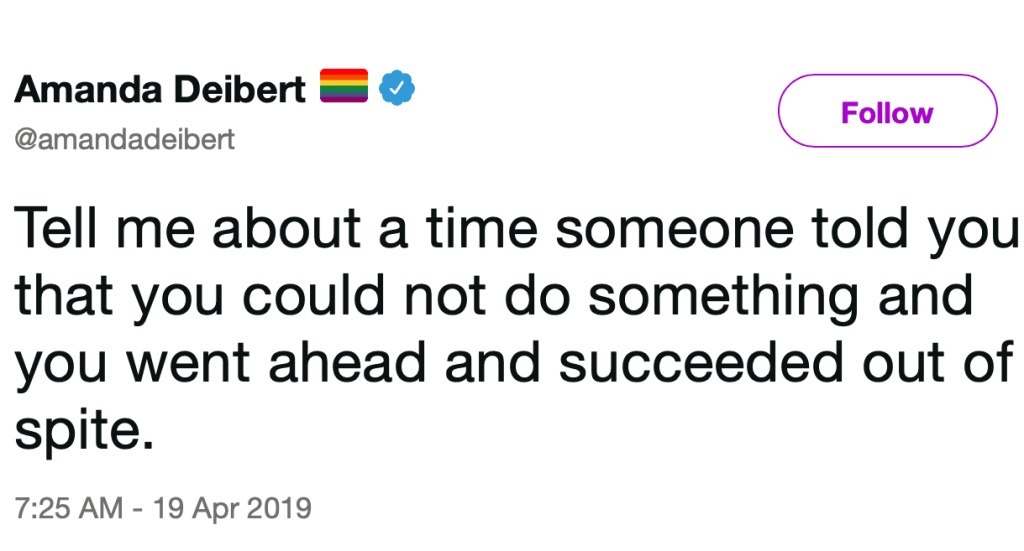 12 Times People Succeeded in Spite of What Others Said

Ever notice when anyone says you can’t do something, it just makes you want to do it just so you can say, “HA.” Maybe your goal was only impossible for them!

And, doesn’t success taste even sweeter when all you got was grief for even trying?

Writer Amanda Deibert wanted to hear from people who were told they couldn’t do something, but did it anyway…

Tell me about a time someone told you that you could not do something and you went ahead and succeeded out of spite.

Apparently, spite is a powerful motivator. Because plenty of people responded…

1. Being a mother does not equal failure.

When I got pregnant with my daughter, I was 15. People told me I’d wind up quitting school, but I graduated — with scholarships. By then, I was married and had a son. When their dad told me I couldn’t finish college, I divorced him and finished, anyway. #ican

2. When life hands you 18th centry French, you make Portuguese.

A professor at the uni told me I couldn't continue with my final project because I couldn't use the main reference I wanted since it wasn't in Portuguese, so I translated it from early 18th century French and the translation is going to be published by the uni's press.

3. Everyone can now shut the hell up!

4. Gee, thanks for the support!

My Organic Chem 2 teacher told me that he thought it was impossible to get an A in his class given that my dad was dying and that I'd need a 96% on the standardized American Chemical Society test that covered the entire year. I missed 1 question and got a 98%.

5. Stand up to injustice.

6. Everyone deserves to work in safety.

I’m a stripper. A manager at my club lied to my face and told me that there were security cameras in the vip rooms when there wasn’t. I was worried about my safety. I just helped get a law passed in my state that requires panic buttons in the vip rooms and a customer blacklist.

My head of department told me that over his dead body would he ever appoint a woman to the faculty. He’s dead, I’m a Distinguished Professor

My English teacher not only made an example of me as a bad writer to the entire class, but said I wasn’t good enough for the school paper.

Many people wrote me off, but succeeded for myself, not spite.

9. Never let anyone tear you down.

I was a young lesbian growing up in Foster Care; I heard “you can’t” and “you’ll never” a lot. Today I am a double PhD and happily married to my wife of 10 years (married only 7, Prop 8 tried to tell me no, too).

10. Statistics show they can kiss our asses.

Jr high math teacher wasn't going to promote me to algebra despite my high marks in 7th grade math. "Statistically she won't finish high school" she said to my mom (who hadn't finished high school herself). I got my BS in CompSci and I'm now a software engineer.

11. Female and left-handed? How could she possibly succeed?

When I was an intern an exhalted surgeon told me I would never make it in surgery because I am both female and left handed. I am now an endowed professor of surgery and just completed a term as chair of @AmBdSurg

12. No one should ever say you’re worthless.

The truth is, success comes to those who never stop trying. Hard work is being the first one in the pool and the last one to get out.

Perseverance pays off and you should never let anyone tell you differently.