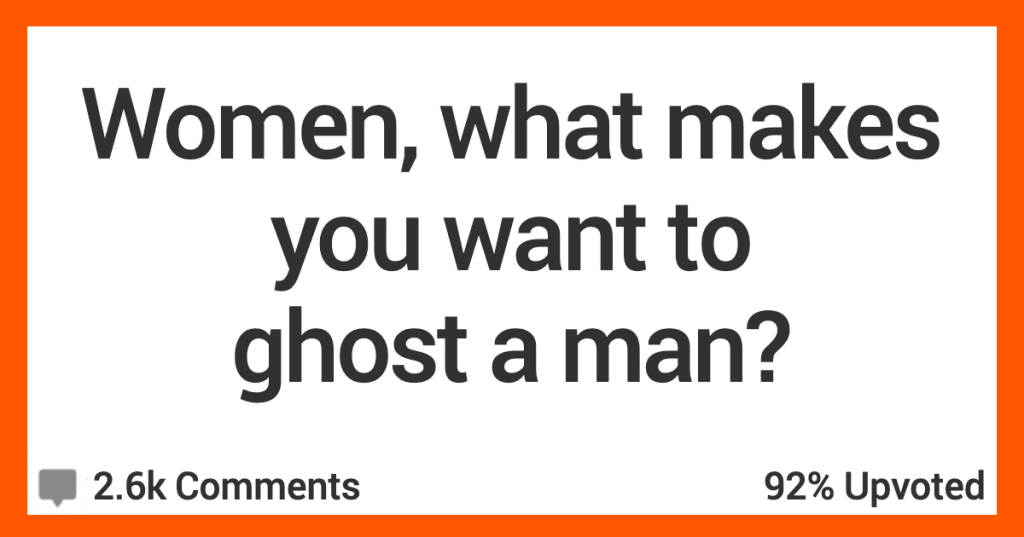 Have you ever been ghosted by someone you were interested in?

But you live and you learn, right?

Check out what women had to say about what they think makes it okay to ghost men.

“I met a guy at a bar once. He seemed like a nice guy and we exchanged numbers.

The following week, he asked me out. I told him I couldn’t that night, but I was free tomorrow.

Why? He asked. I told him I had a funeral tomorrow morning and just didn’t feel like going out. “What time is the funeral?” he said. “I won’t stay too long, please I really want to see you…”

He wouldn’t take no for an answer, and to me that is a HUGE red flag. I ghosted him after that.”

“One guy texted me after our first date that he wanted to put me in a pokeball so he could keep me forever and only take me out when he wanted me… and then texted a load of a**se when I didn’t reply immediately (I was trying to figure out wtf to even say to that!)”

“Talk about how they treated their exes, children, and employees in a way that demonstrates they are clearly controlling and toxic w/o realizing it.”

“Went out on a coffee date with a guy.

He admitted that he placed a GPS tracker in his exes car to track her without her knowledge.

“When you’ve known them for a whole 10 minutes and they’re already making s**ual comments.”

“I was on a date once when I was much younger where I realized the guy was manipulating and lying to me in order to have s** with me, and pushing my physical boundaries way too much despite my very clear protests (e.g. “I’m not going to take my shirt off.” Then the guy sticks his hands up under my shirt).

It took way too long to convince him to get away from me so I could leave, while having to be polite out of fear of what he might do in retaliation.

I sincerely feared I was going to be date raped. It was a shame because we’d actually been having a fairly nice time up until then.”

“When they get too intense, let’s say I’m talking with them for a week and they already telling me I’m the love of their life, the most beautiful women in the world, that they love me are huge red flags for me.

I feel like they like me for what they want me to be and not who I am. How can you know all this after knowing me for a week? I get suspicious when they get too intense.”

“Back when I worked night shift at the hospital.

Guy I was newly dating wanted to hangout that night before my shift, around 5pm. I tried to explain that I would be sleeping until my shift, and that 5pm was like 5am to me and I did NOT want to hang out.

He didn’t get it. He proceeded to ignore my wishes and let himself into my apartment to “surprise” me by tickling my feet while I slept. I definitely ghosted him, and also changed the locks.”

“My personal favourite was sending me pictures of him f**king other girls then being truly astonished I didn’t want to meet him.”

Context matters, but to just come out and say some things makes me second-guess myself, which is the first step to controlling my behavior.”