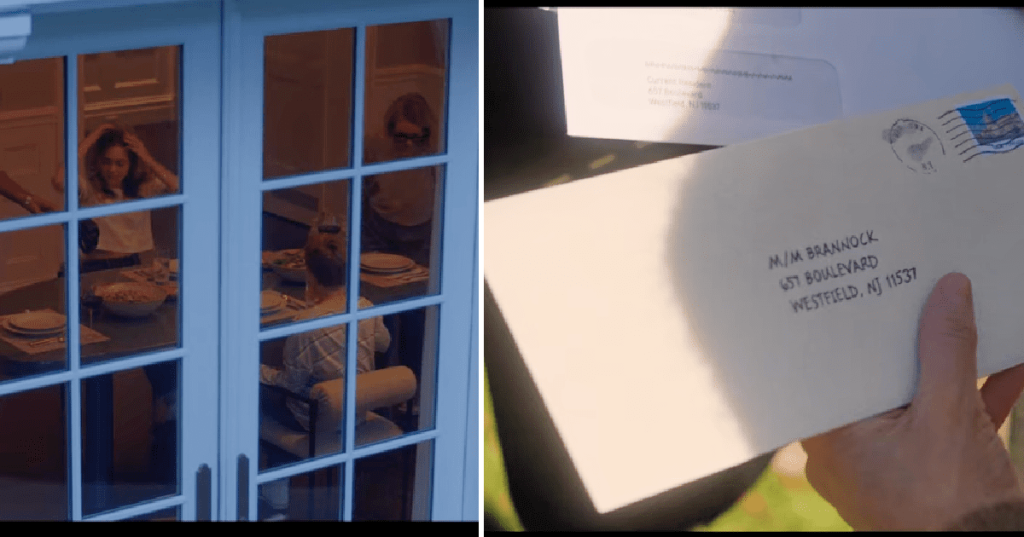 There are plenty of books and movies that claim to be “based on” or “inspired by” true events, and if you ask me, these are usually the creepiest stories around.

Anything that has or could happen is scary, right?

Netflix’s new series The Watcher definitely qualifies as both creepy and scary, and if you’re a little curious about what inspired it all, here are 13 facts from the real-life account.

13. The Watcher contacted the family right away.

Derek and Maria Broaddus bought the house at 657 Boulevard, Westfield, New Jersey in June of 2014. They spent some time there but hadn’t fully moved in, as they planned to complete some renovations first.

Derek told The Cut that soon afterward he found an envelope in the mailbox addressed to “The New Owner.”

The note welcomed the family to the home, but then quickly took a weird turn.

As anyone who has children could tell you, a creep is one thing – and a creep around your children is something else entirely.

“Do you need to fill the house with the young blood I requested? Better for me. Was your old house too small for the growing family? Or was it greed to bring me your children? Once I know their names I will call to them and draw them to me.”

This time, the letter was signed “The Watcher,” and the contents understandably caused Derek to report the incident to the police.

He also contacted the Woods family, who had sold them the house, and was allegedly told they, too, received a letter from a “Watcher” before they moved out.

11. It was clear the Watcher was close to the family.

Two weeks later, Maria found another letter in the mail, and this time it referred to the family by name. It also referenced the names of their three children, and mentioned seeing one of them painting at an easel inside an enclosed porch.

The family told authorities that the easel was located in an area that would be difficult to see from very far away.

10. S/he made some very disturbing claims about the basement.

That same letter asked whether or not the children were too scared to play in the basement.

“I would be very afraid if I were them. It is far away from the rest of the house. If you were upstairs you would never hear them scream.”

The Watcher also wanted to know which bedrooms would belong to whom, saying knowing would help them “plan better.”

The family decided not to bring their children to the house any longer.

Derek, at least, thought that Michael Langford, the next door neighbor, seemed a likely suspect.

The Langford’s home was close to the porch, and according to Derek, the police had also looked into Michael as a suspect but said they could do nothing more.

“This is someone who threatened my kids, and the police are saying, ‘Probably nothing’s gonna happen. Probably isn’t good enough for me.”

8. Experts surmised the letter-writer was an older person.

Robert Lenehan, a former FBI agent hired by the family to try to get to the bottom of the mystery, explained his reasoning.

“I recognized several old-fashioned tics in the letters that pointed to an older writer. These include double spaces between sentences and the fact that the letter had been addressed to M/M Braddus, which is an old fashioned form of writing an address.”

He also cited the lack of profanity as further proof.

7. The neighborhood housed no shortage of creepers.

The Langfords were far from the only suspects, though, as two child sex offenders also lived near the home.

One of the painters who worked in the home claimed to see the people who lived behind sitting and watching the house.

“One day, I was looking out the window and I saw this older guy sitting in one of the chairs. He wasn’t facing his house – he was facing the Broadduses.”

6. Some thought the family was creating a hoax.

Even so, some people in Westfield believed the Broadduses themselves were behind the letters, claiming they likely felt “buyer’s remorse” about the house.

As for Maria and Derek, they believe these theories cropped up because people were afraid, and didn’t want to believe something like this could happen in their safe little town.

5. The family never officially moved into the home.

Six months after buying the house, the Broadduses decided to sell without ever having moved in. They had trouble off-loading it, for obvious reasons.

“One broker emailed to say her client ‘loved’ it but that ‘there are so many unsubstantiated rumors flying around,’ ranging ‘from sexual predator to stalker,’ that they needed to know more.'”

The Broadduses were hesitant to share the letters without knowing whether or not these potential buyers were serious or just looking for gossipy details.

4. They filed a legal complaint against the previous owners.

In June of 2015, the Broaddus family filed a complaint against the previous owners for failing to disclose the letters that arrived before the sale went through.

3. They rented the house, but the letters didn’t stop.

Unable to sell the house, the family did eventually get someone to rent it with the condition that the renter be able to break the lease if another letter was received.

A letter did arrive.

“Violent winds and bitter cold/To the vile and spiteful Derek and his wench of a wife Maria.”

The renter stayed after Derek promised to install security cameras on the property.

A 2022 followup article in The Cut detailed a new theory that Robert Kaplow, a retired English teacher, was behind the letters.

His former students told the media that he had frequently talked about writing letters to a house in his hometown, but Kaplow maintains he wrote “admiring, not threatening” letters to a different Westfield house.

The Cut reported that “at least one of those who refused was a ‘close neighbor’ or 657 Boulevard and someone the police had considered as a suspect.”

Y’all, I would not be ok if this happened to me. Just. No.

Would you have moved? Stayed? Completely lost your cool? Let us know in the comments!