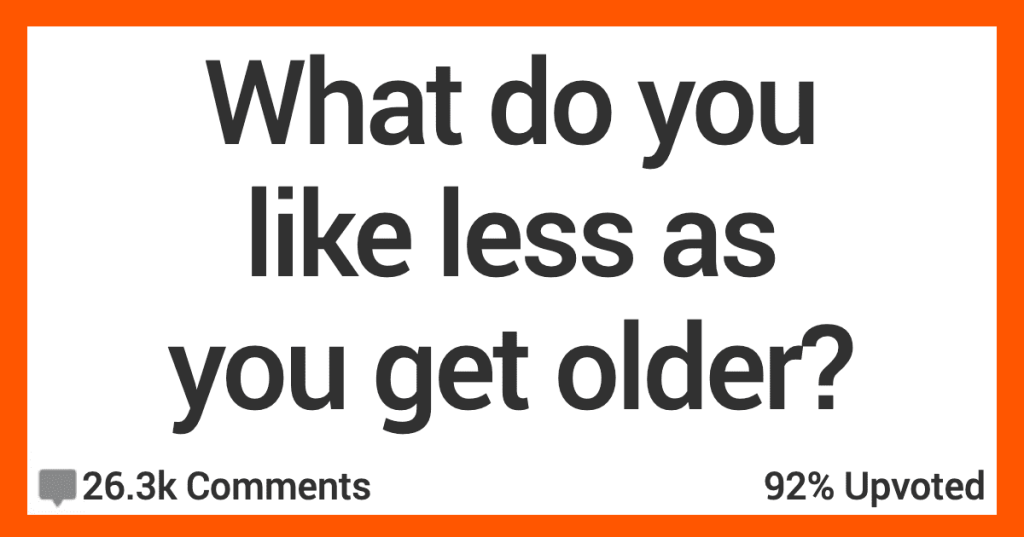 13 People Admit What They Like Less as They Get Older

I’m only in my forties, but I swear that sometimes I feel like I’m 75…or maybe even 80…

And so do these people on AskReddit!

Read on to see what they had to say!

When I was younger, it wasn’t a big deal to go from work to gym to home to right back out half an hour later to bar hop or movie or something.

There is nothing I want to see, nor no food I want to eat, enough that it justifies my standing in line for an hour.

“Crowds in general freak me out now. I used to love just being part of that atmosphere.

But that desire has kind of naturally waned, and is compounded by all the shootings and crowd crush events which just make it even less worth it.”

“My parents getting older.

Oh this thought really depresses me. I can’t imagine how I’ll be if/when the only people who love me are gone from this world.

I sometimes selfishly hope I leave before they do if only so I don’t have to grief their loss, as if them grieving the loss of their child is somehow better.”

I’ve always been sensitive to loud noises but it seems to have gotten worse lately.”

“Going to the grocery store.

So many people have zero situational awareness skills that I feel like half the time I’m dodging people and avoiding busy aisles more so than I ever did.

It is SO mentally exhausting for me nowadays, and it makes me sad, because I used to enjoy it more.”

Ads, subscriptions, paywalls, unhelpful sites with more pictures than words, and streaming service content split up between around 200 platforms, and most of the good content is exclusive to one, and never available elsewhere.”

“Commercial radio is unlistenable, with the same 25 songs on repeat at the only five I can remember the channel for, and even that is preferable to the afternoon talk show of cackling, squawking gossip.

I’m happy to pay a contribution to my group’s spotify; I can have that going on my phone, instead of listening to any of that crap; I can have long playlists, *my* kind of music, and I don’t have to pull over to change CDs.”

“Driving. I used to drive to do fun stuff like pick up my friends, go places I wanted to be, or just cruise during the night and enjoy the air.

Now I drive to work. Even though my car is a million times more fun to drive, I’m perpetually annoyed.”

“Feeling like I’ve done all the right things yet the goal posts keep moving farther out.

I keep getting higher-paying jobs, yet the ridiculous cost of living keeps negating my pay raises.”

The mental preparation beforehand followed by the wide range of personalities at said event…exhausting.”

I’ve already pared it down to Reddit and Instagram YEARS ago but honestly could do without IG too now.”

What do you like less as you get older?