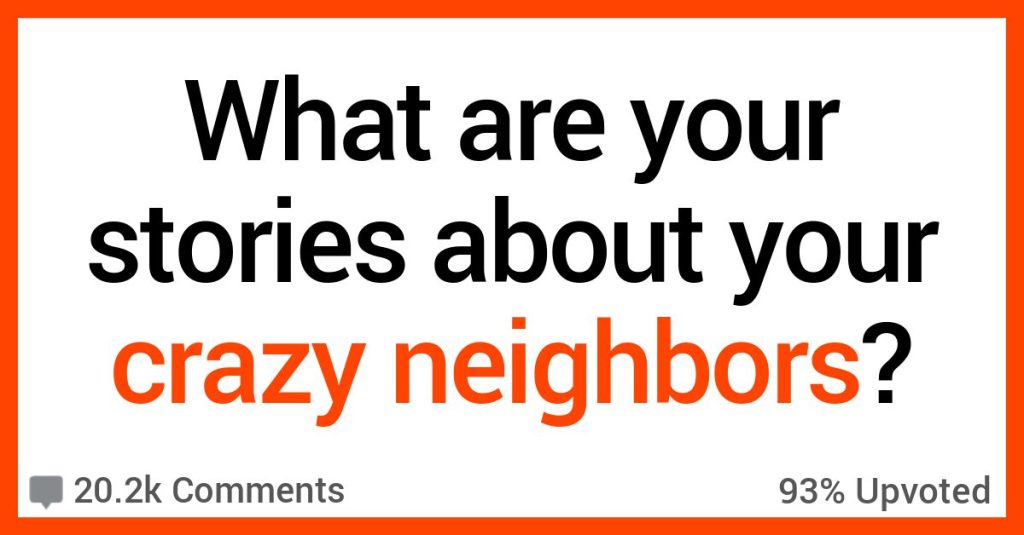 We’ve all had neighbors before that we aren’t necessarily too stoked about.

I used to live next door to a guy in Lawrence, Kansas, who was known as “The Peace Guy.” He was an older hippie type who would wander around town giving the peace sign to people walking and driving by.

But I’d also hear him screaming in the alley behind our houses at night about things that made no sense. The guy obviously had some major issues and I felt pretty bad for him.

Do you have any crazy neighbor stories?

Folks on AskReddit spoke up. Let’s get weird!

“He jumped in front of my car while I was driving down the road to yell at me for going through his trash at night.

Told him it was probably raccoons.

He refuses to believe it to this day.”

“I used to live in a HOA. One of the members on the board lived across the street from my neighbor and I.

He sent a letter to us saying that we all have to mow the lawn on the same day, at the same cut height, and in the SAME PATTERN to create uniformity in the neighborhood.

My neighbor and I intentionally cut on different days and in opposite patterns just to annoy the guy.”

“This woman lived next to us who needed to have the police called on her at least once a week.

She would scream at her roommate at all hours of the night, go into a dr**ken and sometimes drug-filled stupor, and scream at us while tripping out as we sat in our backyard.

More than once I had to kick her out of our home because she walked in unannounced, beer in hand and drunk as ever.

One time I called the police because she was screaming about k**ling someone and rolling around on her front lawn.

Another time I received a call at work (one in the morning as I work third shift). My gf informed me they had to evacuate the house because the neighbor’s garage was on fire. Turned out either she or her roommate had done it while doing drugs or smoking in the garage.

She ended up moving away but would still walk to our house to ask for our lawnmower. She was not happy when I told her to get off my porch.”

“Years ago in rural Arizona we shared a pond with the “crazy neighbor”.

More sad than anything, he was in his 40s and lived with his mother (around 1988). A Vietnam veteran he would walk out to our shared pond with a .45 and a box of 50 rounds.

He would then absolutely unload on the pond while yelling and walk quietly home. This happened every 90 days for about 3 years.”

“My sister’s neighbour reported my sister to the police because her kids were playing in my sister’s garden.

Not for the usual reasons, too much noise etc. Nope, because a volcano in Italy had erupted and the radiation would hurt them.

My sister lives in the U.K.”

“I cared for an elderly woman for many years. She lived to the age of 93 in a crime ridden inner city neighborhood by being as tough and nasty as any criminal living nearby.

Over and over for years. She was never caught, but everybody knew it was her.

She only stopped when she lost the physical strength to slash a tire in her mid 80’s. Then she started using spray paint on the cars.

“He don’t park in front of my house no more,” was all the justification she needed to damage her neighbors’ cars.”

“The old lady who lived below me left me multiple cryptic letters blaming me for the birds chirping too loudly in the mornings.

Not pet birds. The sparrows and s**t outside.

This went on for months.”

8. What are you doing here?

“When I first moved in my neighbor walked into the house, unannounced.

When my wife gets home, sometimes she wants to stay in her car having a phone conversation. He will come out and walk down the side of his house, checking his sprinkler controls and looks at my wife.

He has a two huge bushes he refuses to cut. It blocks our view of backing out of our driveway. The fire department came by to clear trees and bushes around the fire hydrants.

The neighbor came out and yelled at the fireman. “This bush is older than you!”. Needless to say, I hope there are no house fires.”

“She stalks us. Like every time I get home she’ll walk outside and tell me I was either 3 mins later getting home this time or that I’m home 2 mins earlier and then ask me why.

One time my friend and her sister came to pick me up.

The neighbor was against her window with her hands and face pressed up on the glass trying to look at who was coming to pick me up.

My friend and her sister were so terrified they called me telling me to hurry up bc a crazy lady was staring at them through a window.

Ya that was a funny day.”

“We came outside one day to see him pouring bleach on the patio. Asked him what he was doing, he tells me “the bugs are back. You see em? With their little wings?”

No bugs. I didn’t have the heart to tell him, so I said “you must have better eyes than me!”

Dude clearly has schizophrenia. Apparently he’s had exterminators in 3 times in a year, I keep thinking about the kind of person that just says “oh yeah I see em, that’ll be $750″.”

“Had severe anger issues and yelled at anything or anyone he didn’t like on the street. A few years ago he had a road rage incident and when he started banging on the other car’s windows the occupants got out and beat him badly.

During this he had a heart attack and now barely has enough mobility to walk to the mailbox and back, also he doesn’t yell anymore.”

“Country boy moved to the city into the house next to mine.

Landlord had done a terrible job with upkeep so the back yard was covered in d**d brush and overgrowth. Country boy saw a country boy problem and employed the best country boy solution he could think of.

He lit it all on fire the day he after he moved in.”

Do you have any crazy neighbor stories?

If you do, share them in the comments with us.