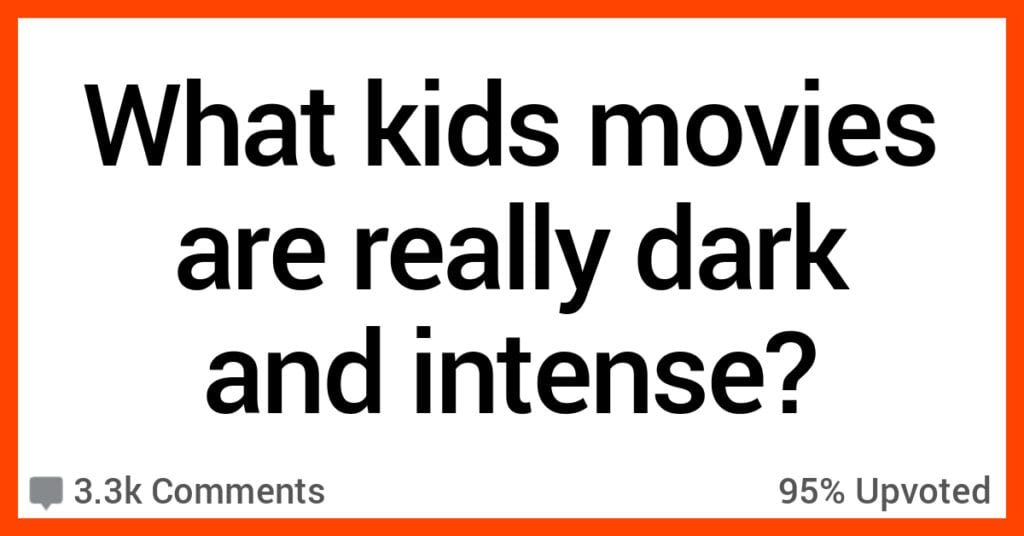 14 People Discuss Kids’ Movies That Are Pretty Dark and Intense

I’m gonna go on the record and say it: Old Yeller scarred me as a child and I still haven’t forgotten about it.

And I stand by my belief that it’s one of the saddest movies I’ve ever seen in my whole life.

Why do so many movies geared towards kids have to be so dark?

Folks on AskReddit talked about the kids’ movies and TV shows that are actually pretty disturbing.

“Watership Down was one I watched when I was likely 5 or 6.

It was way worse than I expected.

I don’t know that I have watched it since.”

I showed it to a bunch of preteens a couple years ago and they were far more horrified by the all-egg smoothie Bastian’s dad makes at the beginning of the movie than they were by anything else.”

“Who Framed Roger Rabbit? is the defining movie of this subgenre.

It makes a lot more sense once you understand film noir, but what 8 year old is going to pick up on that?

Especially the part where Jessie gets left in a box on a hill. Made me scared to give away my toys or even give them all less than equal attention for years, even though I was pretty sure they weren’t sentient.”

“Disney’s 1979 sci-fi film The Black Hole. It was the first film from Disney to receive a PG rating. I saw this movie in the theater when it was new. I had just turned eight years old.

It’s pretty dark, and I remember the ending was kinda creepy but I wasn’t traumatized by it or anything. It was probably fine for my age but I grew up in a different era. These days it would likely be PG-13.”

“The Princess and the Frog.

A character d**s (won’t spoil it) and it’s a very clear d**th. Another is implied to be k**led. Demons/ghosts, voodoo, guns and the implication that the frog will be used as a lifelong blood bag.

The movie is great. I feel like Tiana is an inspirational character for young girls, but I’m not showing this to a single digit age child.”

“Monster House always freaked me the hell out as a kid.

It could just be because I was always uncomfortable with any sort of ghosty claymation-looking movies, but it always made me really uncomfortable.”

Incredible movie, but not for kids. It is animated though.

Also, Ratatouille. Not so much dark but I feel like it connects with people who are in there late-teens/20’s.”

“Mrs. Doubtfire – one of my favorite movies that I find highly enjoyable as an adult.

Robin Williams is the star of the movie, and he’s wearing a disguise, but, it’s loaded with adult humor and themes. Maybe some kids are wise to what’s happening, but, it would be real easy to love Daniel while despising Miranda.

There is even a set of deleted scenes with Daniel getting revenge on the neighbor who called the police on the birthday party, but, even if she was a bit nosy, he was in violation for bringing in animals from a petting zoo, and being excessively loud.

Apparently, the original idea was to have Daniel and Miranda get back together too, but, Robin Williams and Sally Field fought against that ending, because it could give kids who watch it a sense of false hope.”

Maybe debatable as a kid’s movie but it did have a PG rating and was later made into an after school cartoon series.

It has it all though, decapitated heads, a woman emanating smoke from her neck hole, depictions of s**cide and one F-bomb.”

The KIDS are disturbing looking puppets.”

“Grave of the Fireflies.

It was originally released as a double feature with My Neighbor Totoro as the studio wasn’t sure that Totoro would do well. But yeah, that movie was released for kids.

That first double screening must have been disturbing as all hell.”

I had a cousin who was OBSESSED as a child so we watched it a lot.

I still have nightmares about that creepy as black fog overtaking everything around me.”

The buttons were creepy, yes. But the creepy thing I got from that movie was how easy it was for people to prey on children. Coraline’s parents weren’t terrible, but they were preoccupied–with things not her.

This caused them to do what they saw as little actions (ignoring her when she wants to play, telling her to go entertain herself, rejecting her attempts to stand out, etc. etc.) that, to her, seemed like really big big actions.

So from her perspective, she’s being wronged and neglected when she’s in a new unfamiliar place far from her old friends and she’s lonely and (as she sees it) feeling unwanted… whilst her parents are too busy to notice. Then this Other shows up–her Other Mother. A creepy stranger who’s willing to fulfill all those roles Coraline’s own parents won’t.

This predatory figure dotes on her, plays with her, gives her gifts and attention and positive feedback–and because of this, she consistently ignores all the little signs that scream GET OUT, CORALINE! She ignores them because she’s young and naive and just desperately wants to be loved and given attention, even at the expense of her own safety.

By the time she realizes she has to get out, it’s too late–she’s trapped, and the Other is willing to do anything to get what it wants from Coraline.

I think Coraline is a cautionary tale for parents and children alike–how the way adults and kids perceive the world is very different, and how predatory people are so very good at exploiting that.”

Okay, now it’s your turn to speak up.

In the comments, tell us which kids’ movies and TV shows creep you out.