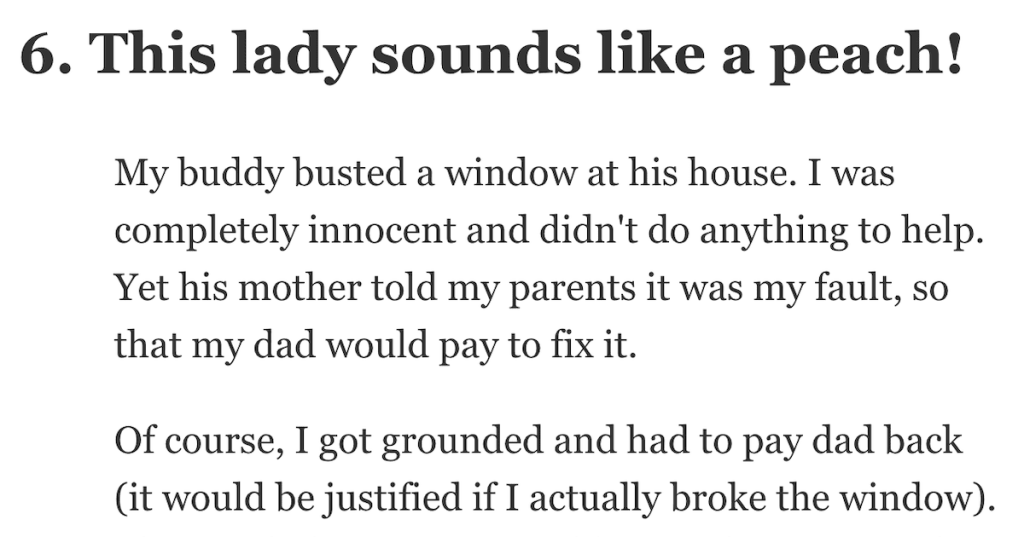 Remember when we were kid and you thought life was going to be fair?

Remember that moment when we realized that life wasn’t going to go according to our barely formed plans?

Yeah, that’s what this post is about. All of those moments that are indelibly committed to our memories because THAT is when we really started living.

These 13 people didn’t forget and they were will to be brave enough to share their experiences.

When I was in third grade I got suspended for being beat up on the playground.

Also I never took a swing … just punished for being bullied

My mom: informs everyone dinner is ready by yelling from the bottom of the stairs and expects me to hear her despite my room being on the other side of the house, my door being closed, and my TV being on.

Also my mom: “Don’t yell from the top of the stairs, you need to ask me in person or else I can’t hear you. I’m not made of ears you know.”

I was sent to the principal’s office for knocking over a cone during gym class.

I was sent to the “guidance counselor” (basically used the same way as the principal’s office) for tearing a piece of paper.

Not me-specific, but there were lists posted on the wall of the school dictating which recess games kids in each grade could play (octopus tag, for example, might only be allowed in second and third grade). If you wanted to play a game that was not on the list, you were required to talk to the principal (how one would arrange such a meeting was never really clear).

I was scolded for playing pretend Star Wars during recess because it “encouraged violence.”

I was asked if I needed a chew toy to help me concentrate. I wasn’t focusing on classwork because I found it too easy.

I went to a private school where I was bullied a lot.

No one in admin did much when my friends and I reported it.

Occasionally a lecture from the AP for the entire class with no specifics or calling out.

In 5th or 6th grade, one of my bullies kept pinching my a** in line for PE (didn’t read into that at the time) until I finally turned around and screamed at him to knock it the f**k off.

I got detention and was forced to apologize ?

In first grade getting my yellow card flipped to red while I was in the bathroom.

The teacher flipped everyone in the class one card while I was away because I guess she had it with us.

My buddy busted a window at his house. I was completely innocent and didn’t do anything to help. Yet his mother told my parents it was my fault, so that my dad would pay to fix it.

Of course, I got grounded and had to pay dad back (it would be justified if I actually broke the window). I lost a whole summer, unable to go hang out with friends or do anything fun, all because that bi**h was a cheapskate. I’m not friends with him anymore.

But I did get to see his mom later on. She was the kind of person who would wear clothes once and return them. So I knew what she was doing. I told her we couldn’t accept the returns because she washed the receipt and I couldn’t verify it was legitimate (even though I could). So I screwed her out of money too.

I’m a terrible person for doing it, but she was a bi**h.

Turned in 2 papers in third grade that were not facing the right way. Got held in 10 minutes from recess because (they won’t let you do that in college or in business)

Never had an issue with it in college. Worked a retail job with daily paperwork. They didn’t care what the paper looked like as long as they could read it and as long as it was done.

I saved my money to buy a pair of X-Ray Specs from the back of a comic book.

Learning that you can start a sentence with ‘and’.

Despite, you know, me being fed that information since Year 3.

To me it was realizing adults are usually just as childish as children.

But worse because they can’t be punished and usually have authority of some sort.

Depressing when you literally look up to them.

Not the first but one that sticks out strongly in my mind.,

Me laying in a hospital bed after an overdose when I was thirteen.

My mother and father were standing on opposite sides of the bed screaming and yelling at each other over me.

I recall making eye contact with a nurse for a notable length of time.

Teacher tells the class to complete the worksheet and there is to be NO TALKING. We all start on the worksheet….and a boy behind me starts talking to me about something….I turn and tell him to stop talking. Teacher called me out and made me go to the front and turn my card from green to yellow…(red is the next warning and means you’re going to the principal’s office.) I was so distraught. I’d never gotten in trouble before. I stood under the slide the entire recess crying and then cried off and on the whole rest of the day silently.

I just knew my parents were going to be so disappointed and would of course know before I got home. When I got home and they didn’t know I’d had to turn my card, I told them. They asked me why I was talking and I told them the story. Mom said, “Well, he shouldn’t have been talking but let the teacher deal with him, you shouldn’t. It’s ok, it’s not the end of the world.”

I was aghast! “What?! it isn’t? I can still go back to school? It won’t be on my permanent record!? My life isn’t over and I won’t be labeled a “bad kid” forever?!”

I felt like I got my second chance at life.

Being told I could not use the restroom in class.

I was not a cut up and really had to go. It was dehumanizing.

Ahhhh…. life is grand, isn’t it? We want to stay innocent, but we just can’t. Because that’s not how life works.