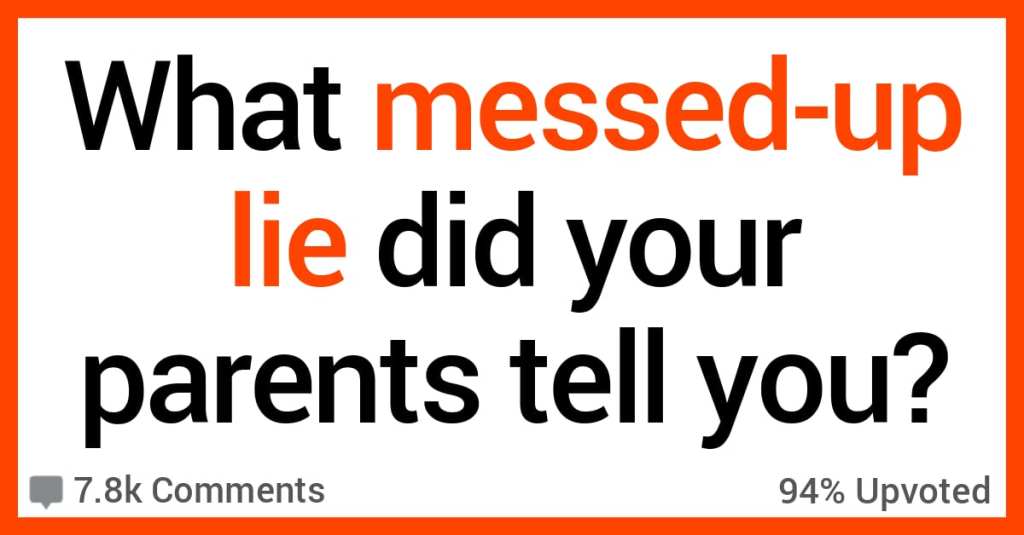 I’m guessing that most parents tell at least some kind of little white lies, right?

Things to get their kids to go to bed or eat their dinners, that kind of stuff.

What’s the most messed-up lie your parents told you?

“I was told that watermelon seeds would grow inside me and sprout out of my head if I swallowed them.

Needless to say, I cried until I threw up when I accidentally swallowed watermelon seeds.”

“I was all of maybe 9 years old but I was responsible for getting my younger sister up, ready and out the door for school in the morning. Maybe once a month, in a rush I would forget to set the alarm.

Apparently this bothered my mom enough that she unexpectedly picked me up from school early one day. She told me that because I had forgotten to lock the door, the house had been robbed and all of our tvs and game systems had been stolen. She led me into my room, which for some reason was the only room in the house that had been trashed.

She went on and on about how it was entirely my fault, I deserved this, how I was going to be working to pay off every stolen thing. After a few hours she let up that it was all just a set up to teach me not to forget set the alarm. She hid the electronics and trashed a nine year olds room to make a point.

“1.) You have extra teeth because you are related to the Donner party.

3.) All the oil stains on the road were kids that didn’t look both ways.”

“My dad told me that if I drank Mountain Dew, I wouldn’t be able to have kids.

For a solid three or four days, I was really sad about never having kids, until he finally told me.

Funny now, but it really messed me up for those couple days.”

“When I was about 12, my parents told me my beloved cat was lost.

Years later, I found out they gave her away because they didn’t want to take her when we moved. I had been so heartbroken over it, combing the woods, putting up signs etc.

Her name was Rosie and she was only a couple years old. She’d sleep with me every night. I still can’t believe they could be so cruel.”

“How much time do you have? These are not in any particular order.

Any food eaten before the prayer is over is literal poison and will k**l you. I was physically restrained (painfully) to prevent me from testing this (obvious) lie.

I do not have rights until I turn 18.

Because we caught you looking up pictures of nude women online, now you’re going to burn in hell forever and we can’t be together in the afterlife. This is your fault.

The reason your mother and I wear this special underwear is that it protects us. There are people who survived fires and stabbings because of this underwear.

If you are in an accident and you have someone else in the car, that person’s parents will sue us and we will literally lose everything and be homeless. Therefore you are forbidden to have passengers in your car.

The reason there are only right-wing radio hosts on the air is because the liberal ones are run off for being idiots.

While they never outright said, “s** is illegal,” their actions led me to believe it was for most of my childhood. Blocking my view in a movie or show if anything more than a light peck occurred, along with scenes containing violence, really kindled the concept in my mind that it was against the law.

I don’t talk to my parents much.”

“That my mom could speak French. She’d say some gibberish and convince me it was French and my three-year old self would walk away feeling extremely impressed.

Then one day thankfully my grandmom could take no more of the lies and the deceit and gently broke it to me that my mom had made a fool of me for a year or so.”

“My parents lied to me about being on the autism spectrum.

My mom claims she wanted me to grow up “normal” so she never told me.

In actuality, all this did was make me think that when I couldnt do or understand something or if I had an issue with loud noise I was just being stupid. Not fun.”

I still have massive issues about it.”

“That Snapple (the drink) was made by terrorists. This was shortly after 9/11.

I believed it to be true and didn’t have Snapple until my early 20s.”

“My mum told me when I was about 4/5 years old that if I wasn’t asleep by 10 pm, a man named Peeping Tom would be at my windows watching me, and would hurt me.

F**ked me up for ages, and I was terrified of being awake at night.”

“Any Asian knows the bull their parents or grandparents say to get them to stop doing something. They say you’ll either d** or get cancer.

When I was a young teenager and anticipating my first period, my grandma told me to never sit on the toilet for too long while on your period, because you’ll get a blood clot and d**. I later found out she just didn’t want me sitting on the toilet with my phone. I don’t know why she didn’t just say that. And no, blot clots from your period will not k**l you.

My mom told me that when she was a kid my grandma told her that she was gonna d** countless times for doing something that was completely fine. Good ol’ Chinese guilt.

When I was 13 my dad got me my first laptop, and I brought it to my grandma’s house to do an essay for school. The second she saw the computer, she said to me right in front of company she had over “Don’t watch p**n. That p**n is bad.” Thanks nana, now everyone thinks I was gonna watch p**n. SMH. So embarrassing.”

“My narcissistic abuser mother made up a story so real I believed as a kid.

She said people have kids to save them to eat when the apocalypse comes, whether nuclear war, or some other apocalypse type,

She made a highly detailed story saying kids were just food stocks, that I was to be eaten first, even though I was the skinniest and tallest and basically just skin and bones, and I was the scapegoat ( most hated and blamed on for everyone else’s misery) and she said “ why do you think I feed you all that yummy food?

I’m growing you up nice and fat so when the apocalypse comes you’ll all be eaten, there was three of us kids, but she also explained the cruel slow ways we’d be slaughtered… yeah it was really f**ked up and I actually believed it. She used this as a way to control us kids saying if we didn’t do what she said we’d be ki**ed and eaten early.

I was her punching bag and she physically and emotionally abused me in ways that a child should never have to suffer. Her master manipulative ways and gaslighting was some of the most disturbing s**t I’ve seen a “ parent “ do.

I’m free now and am thriving, she also controlled my finances for a long time and I finally have my own money careers I wanted and am very happy.”

In the comments, tell us about the most messed-up lies your parents ever told you.