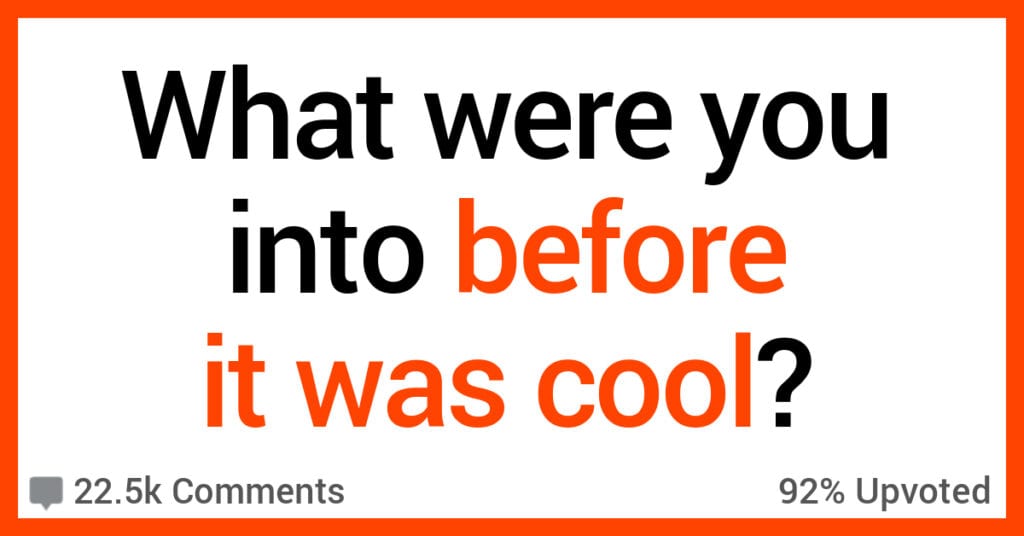 15 People Share What They Did “Before It Was Cool”

I was into it before it was cool!

Whether it’s music, video games, movies, fashion, or a million other things, people like to make this claim and to put other folks in their place.

I guess you can classify it as shaming of some sort.

What did you do “before it was cool”?

I read “The Martian” back when it was just a text file on some backwater website.”

“I had a fidget spinner on my desk for about six months before they blew up.

At that time they weren’t being mass produced at all. You pretty much got them 3D printed or laser cut from acrylic.

I thought they were neat and sent them to my dad and brothers for Christmas.

I still have my first one on my desk. It’s laser cut neon yellow acrylic.”

My friends and I were doing it with a Palm III with the GPS attachment back in 2000.”

“Bought Bitcoin in late 2010. Was on a malayasian private server for an old game I used to love, called Risk Your Life (RYL)

This server has a real money mall and of course I am dumb enough to want to pay to win.

So I go on their site and they don’t take normal credit card or PayPal but they offer some weird s**t called Bitcoin.

And 400 sat on my wallet until I sold most of it in 2017 for an absolutely massive profit. Still holding a few and changed my entire life.”

“When I was a young kid, my dad brought home a Fairchild gaming system, and I got addicted to playing video games like Pong and Breakout on my home television.

“I ordered Nirvana’s ‘Bleach’ on cassette before Nevermind came out.

Saw in a magazine that they were supporting Sonic Youth, and Daydream Nation was my favourite album at the time, so that was enough of an endorsement for me.

I was the coolest 14 year old in New Zealand for, like, two months. Then Smells Like Teen Spirit came out, and I spent the rest of my teenage years declaring that i liked them before they were cool.

Nobody cared. And I still miss Kurt.”

Before 2010 when the Storage Wars show first started, you could find auctions with a few bidders, mainly pawn shop guys, but find smaller ones on the cheap for furniture, especially during my cheap college years. Show up, place a bid for $20, get a couple end tables, bed and chair.

Thanks to that show, everyone thinks they’ll hit the jackpot, as if people who default on their units all leave behind 1940s memorabilia or something. Bids skyrocketed beyond comprehension on or around 2011, it just hasn’t been worth it since then.

Most the stuff is junk, people. The tv shows are fixed and edited. It’s not worth it thinking something is always hidden. People with valuables many times put that in a safety deposit box, not a storage shed unit.

I feel bad for the college kids who not only can’t get decent apartment rent levels, but also can’t get furniture on the cheap from storage sheds like I used to, simply because of the false expectations from a fixed TV show.”

“I used to record with a VCR when I played Mario bros 2.

When VCR recording came out I thought, hey, I could record whatever is on the TV right? It worked, I was floored. I ended up watching the tape once and thought it was the coolest thing ever.

This was on a huge furniture tube TV that sat on the floor and only had a few channels you selected with a dial. So, I pretty was a twitch streamer before it was cool. The only minor difference was I didn’t make millions of copies and mail them out to the masses. Minor.”

“My college roommate was from Seattle- he had been to a few Macklemore shows when he was in high school.

I remember when “Language of My World” came out, my roommate was certain that Macklemore would go from being a semi-underground PNW rapper to a household name.

We bought three tickets and our other friend couldn’t come. We ended up selling that ticket for a few hundred bucks- it paid for our gas and drinks for that weekend trip.”

“My high school friends were convinced that local band Slipknot was going to be some big deal.

They’d go watch them play in like basements and s**t.

I saw them play in a field once with people gathered around them in a circle.”

I was the only kid in high school that printed book reports and probably one of the few that even knew what a MODEM was.”

I bought a pair in the US circa 1989, when the only people using them were ice hockey players doing summer training, and they were completely unheard of in Europe.

Brought them back to the UK, and for a while, I was the most cutting edge skater in town. By the time they became popular, and dare I say, ‘cool’, I’d already ditched them and moved on.”

13. Would have been amazing.

There was a lot of serious heckling and booing — cups and stuff thrown onto the stage. Bon Scott dropped his trousers and bared his a** to the crowd then walked off the stage.

If I recall correctly, there was nothing wrong with the performance, but the people were there to see Aerosmith, and were just didn’t want to wait.”

I had to wait for book three.

You kids have no idea.”

“I saw The White Stripes open for another band before they blew up.

He was right and I was not.”

What are some things that you did before they were cool?