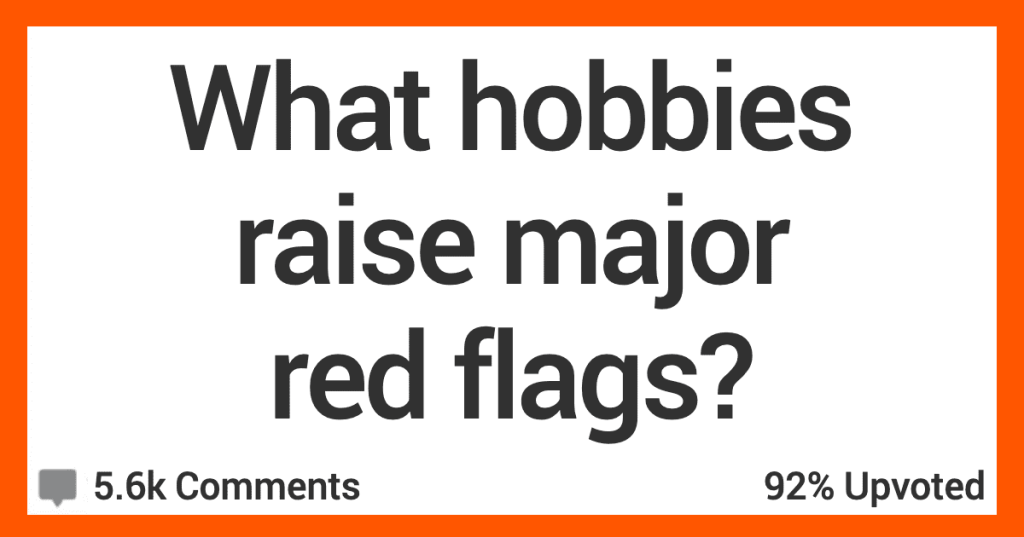 Do you think people who do taxidermy in their spare time are throwing up some major red flags?

I’m not trying to rush to judgment about anyone, but it seems kind of odd to me…

Let’s hear from AskReddit users about the hobbies that they think raise red flags.

“I work at a casino.

Gambling is my answer.”

“People who like to find tiny and cramped caves to climb in and squeeze through.

I am scared of you.”

There is a whole industry built around this.

Guy I know runs an auction site for this kind of thing. I stopped talking him I found it so bizarre I didn’t trust him.”

“Collecting the condoms of your s**ual partners and making a scrap book based around the subject.

Yes I knew a girl who did this and she was a crackpot.

No I was not in the scrapbook, but many friends were.”

“Dated a girl in high school that one day proudly proclaimed she finished my carving and showed me a wooden stick person with my name etched into the body.

Broke up with her, and she sent me a video of the wooden me burning. Apparently, she did that with all her ex boyfriends.

So yeah, making wooden effigies became a red flag hobby for me.”

I’m half joking as it’s a hobby I want to get into myself, but it’s a world with some serious politics and immature, catty behavior.”

“Catching insects that enter his room and trapping them in a box watching them d** slowly day by day.”

“Knew a guy who collected N**i and German WWII antiques.

I can understand if you collect WWII antiques, German, US, UK, USSR, etc.

He only collected German and N**i stuff because “it was made to a higher quality degree.”.”

I have met tons of horse people and individuals that partake in that sort of lifestyle/hobby are truly some of the most insufferable humans I’ve ever come across.”

While not everybody who partakes is a red flag, I did get banned and blocked from a doomsday group on Facebook a while back for calling out an entire thread of people for making r**ist comments about l**ching black people and using the N word freely.

There were so many people commenting being openly r**ist and no one in the group cared, they held so much h**red in their hearts and it was accepted there.

I couldn’t believe the things I was reading, and for ME to be the one banned for saying something told me all I needed to know about that community.”

My mom and sister were really into Scentsy a few years back. My sister later got into QAnon s**t and spread it to my whole family.

“I recognize that there are normal people who enjoy it, but anyone I’ve ever met who is really into MMA / UFC tends to be a hothead jerk.”

“People who build cars and/or race cars for a hobby, if you’re not into cars yourself, run.

They’ll spend more money on that car than you.

They’ll spend more time on that car than with you.

You’ll be dragged to car/race meets most weekends.

Your house’s decor will be “insert make of car” memorabilia.

Gifting is easy though since all they want is a gift card to their favourite car store or just buy them more car memorabilia.

If this isn’t the life for you, run! Because there’s someone out there who would appreciate them and their efforts.”

“Knowing loads of super specific details about serial k**lers and stuff like having a creepy obsession with it.

It’s not specifically weird but it always creeps me out whenever people start talking about it.”

Do you think certain hobbies are red flags?