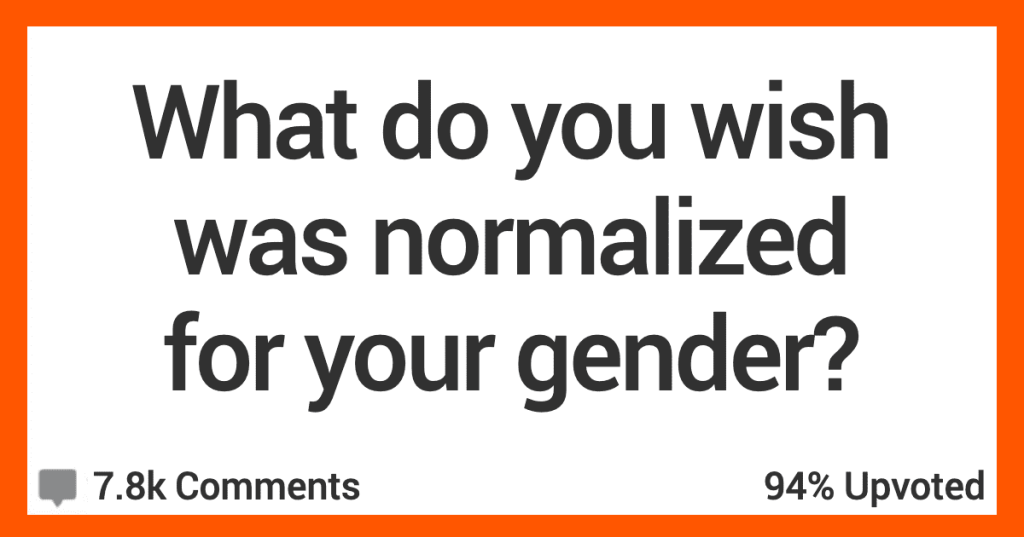 13 People Share What They Wish Was Normalized for Their Gender

When I was growing up, the lines were pretty clear about gender, but things have changed A LOT in the past 15 years or so.

And I think it’s safe to say that gender is a pretty big hot-button issue.

So let’s hear from people on AskReddit about what they wish was normalized for their gender.

Why do I have to pretend like they don’t exist?”

“Being single as a choice doesn’t mean no one wants me, it’s just single by choice.

Don’t have the time nor the mental to have a relationship especially when struggling in life enough as it is.”

“Mental illness, but that should be for everyone.

Yeah I don’t get taken serious in the slightest bit.”

I’m completely lost and uninterested. I used to be somewhat embarrassed about it, but now if they ask me anything, I just say, “yeah, I don’t follow sports.”

“To have a high pitched voice.

My voice swings between Batman and chipmunk and it’s really annoying when I walk up to someone and sound like Chip and Dale.”

“Being a stay at home dad.

Mom does it and she’s a hero.

Dad does it and he’s a failure.

“I’m a woman who is into watching certain sports. Some guys don’t think that’s normal.

So many guys have to quiz me on my fandom. It’s crazy. They don’t do that to their guy friends.”

I got told my haircut was nice 3 years ago by a stranger and I still think about it.”

“Postpartum care prioritized and taken as seriously as much as pregnancy care is.

Long term treatment for PPA and PPD. Talking about finances and work wages.”

“Being held. Laying on HER lap. While she plays with YOUR hair.

It’s the most relaxing thing in the world.”

Ain’t no one ever get flowers for men.

“Ironically, being a woman that doesn’t really enjoy being around kids and doesn’t want them myself.

I wish it was normalized for me to not show enthusiasm towards kids.”

“Being a physically strong woman.

I like to work out but nobody else in my office does.

Most of them happen to be guys. They’re always so surprised when I lift something heavy.”

What do you wish was normalized for your gender?