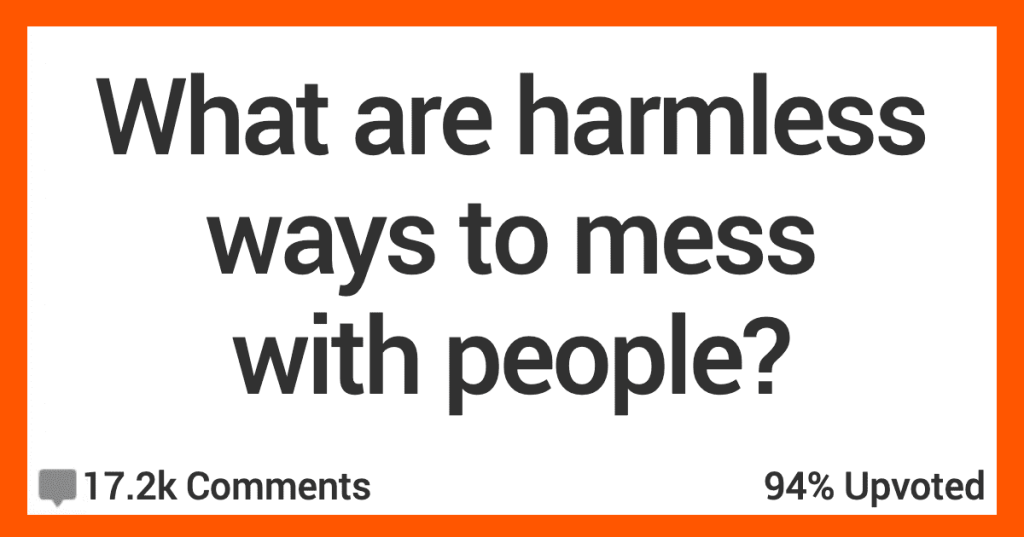 Let’s have some harmless fun today, my friends!

Because we’re gonna hear from folks on AskReddit about the harmless ways you can mess with other people.

Buckle up, this is gonna be fun!

“My dad used to have this game with a friend. They embarrassed me endlessly when I was a teen (but that was a bonus).

Basically, when they were walking in the street, whenever they were passing someone, they would say things like:

“Remember, when you pushed your mother-in-law down the stairs…?”

“I mean, it wasn’t that much drug, usually I carry way more than that!”

“Where did you hide the knife after st**bing him?”

You get the idea, anything absolutely awful as if they were having an entire conversation about drugs, m**der, whatever.

My dad and his friend had the whole hippie look as well, so innocent passersby would quickly cross the street.”

“I mispronounce Famous peoples names constantly then say it correctly randomly so they never know what to expect.

“If you ever have a moment with their computer or cellphone use their search engine to look for a bunch of non-sense products and then erase the search history.

The algoritm will think they have a interest in said products and put a bunch of adds recomending them for the next few days.”

“When using the military phonetic alphabet, I’ll use all the right ones except Q. “A as in alpha, g as in golf, q as in cucumber”

“Oh that’s a sea cucumber, I meant a regular one”.”

“Buy a set of “Voice Activated” or “Motion Activated” stickers from Amazon, and the possibilities are endless.”

“I mess with colleagues during meetings by controlling how they sit.

You copy everything they do to start, they lean back, you lean back, etc. Then, slowly, take the lead. If they are sitting back. Sit forwards.

I have managed to start mini waves of people moving back and forth in meetings.”

There were 4 people in the picture.”

8. Going around in circles.

“When you shake someone’s hand, move yours left to right.

As they do the traditional up and down, a hilarious circle ensues.”

“It’s Dave, but without the F”

“I put a tiny piece of masking tape over my co-worker’s mouse laser on April fool’s day one year, wrote “April fool’s” on it.

He troubleshot every single thing except examining the mouse. He eventually called IT who simply turned the mouse over and pointed it out to him.”

“When driving I like to wave at random people as if I knew them.

Hilarious to see instant confusion on their faces.”

“Mail someone a red golf ball every week for a while.

Then mail them a green golf ball and stop.”

“Every year on National Sibling Day, I post about my two great siblings.

I have three siblings.”

Let us know what you think about this in the comments.

Let’s have some fun!