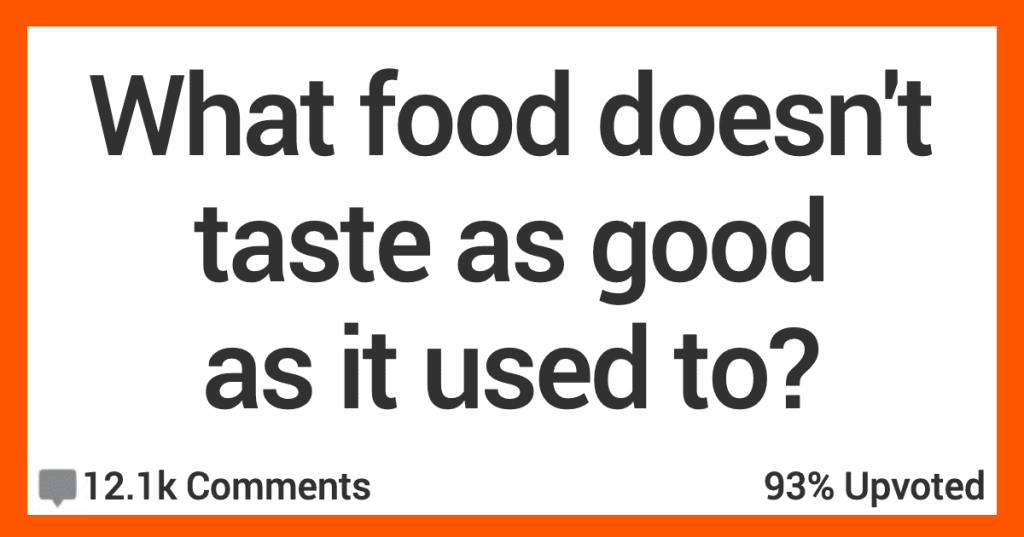 This is a tricky one…

On one hand, I’m inclined to say that a whole lot of things don’t taste as good as they used to…but on the other hand, maybe it’s just me getting older?

Take a look for yourself…

Those things were like the food of the gods when I was a kid in the ’80s. When they brought them back for a while a few years ago I bought a few cans, only to find out they tasted like disappointment.

They used to be the bomb when they were made in store, then restaurant brands bought them and decided it was better (cheaper) to make them in a factory and ship them to stores to have them heated and topped.

Nah I miss old time Hortons, I refuse to go there now.”

I remember getting excited about buying a ton of snack cakes as a freshman in college, then getting back to my dorm and being…. massively underwhelmed.”

They ruined the flavor 20 years ago.

It tastes bitter after 20 seconds.

They should just discontinue the gum.”

Most other Girl Scout cookies since they changed manufacturer, but I miss the old Thin Mints the most.”

She left me her recipes when she passed but I still can’t recreate her magic.”

Bought one out of a vending machine and thought it was bad, googled it to find a bunch of people complaining about it. How do you screw up so bad?

It’s probably cheaper but I’d think you’d lose enough sales to counter that. I won’t buy one again for sure.”

I vividly remember KFC hitting the f**king SPOT when I was a kid.

I’ve commented on this many times but the last several years the peach crop has sucked.

I haven’t had a good, juicy, non-mealy peach in a long time. IDK what’s going on with the peach farms and trees but they’re just not as good.”

I used to love that growing up (born in the early ’90s) and somehow while cheapening it they made it bitter and unpalatable.”

Were they ever good? I used to think so.

I used to be able to eat a whole sleeve of those as a kid they were so good.

Now they taste so processed and like, kinda stale? It’s disappointing.”

Still good, but seems like the flavor is blander than it used to be.

I wonder if it might be due to a shift from wild-harvested to farmed?”

Do you think there are some foods that don’t taste as good as they used to?