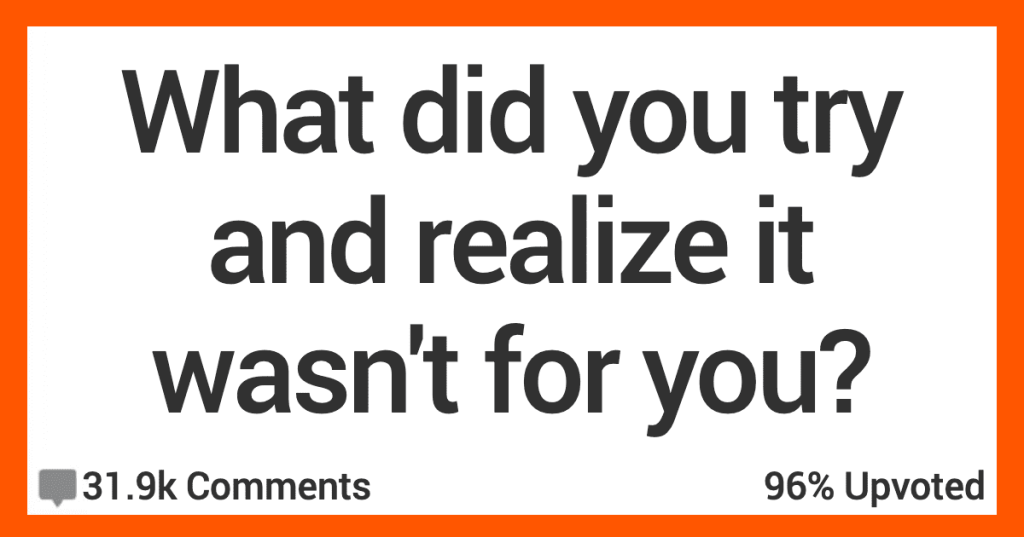 Life is all about trial and error, experimenting with various things until we find out what works for us.

Because we’re all individuals with different tastes!

So let’s hear from AskReddit users about what they tried but ultimately realized wasn’t for them.

Worst experience I’ve ever had in my life.

So glad I wasn’t one of the ones that get hooked on that s**t.”

Not the right personality for it.

Went back to being a medic.”

“Working in a daycare.

Made me realize I love my kids, not all kids.”

“I tried a sensory deprivation tank because I thought it would be therapeutic, etc. and it devolved into a panic attack.

I really tried to ride it out, but fifteen minutes in I crawled out crying and shivering. Apparently some of us need to feel connected to our senses to feel… real?

Also the salt burned the s**t out of my scalp. Wear a swimming cap if you’re gonna try it.”

I feel this one. Spent 5 years doing office work and didn’t realize just how much it was taking little pieces of myself in that role. It wasn’t hard, but was unappreciated and had no real direction. The “team” completed stuff and somehow I was supposed to feel fulfilled without having any part in the achievement.

Instead, I went to electrical lineman school. It was hard on my body, but I managed to stick it out. Graduated and took a groundman position doing real linework. So far, as a career, it’s been fulfilling to have a hand making modern living possible. Way more satisfying, but I seriously need to take stock in Motrin…”

A committed relationship is far less stressful and more satisfying.”

I love the water, I’ve been swimming since I was a tot. But the part of my brain that says breath, said “NO” when I was underwater for any more than 10 minutes.

I went out to do my qualification dive, made the swim to the buoy and on the return trip I left the water and informed my instructor. He was there with another couple for their 2nd checkout dive and so finished with them and we all went home.

I wish I could have done it, he even told me I had a year to come back and try it again, I drove by his storefront every day on the way to and from work and was never once tempted to stop in.”

My teacher straight up promised to give me an A for effort if I didn’t come to class anymore.”

“Sleeping with my friend’s wife.

My friend wanted me to do it (I guess that’s his fetish).”

I don’t like interacting with people in real life and turns out it also applies to games.

Single-player games are the way to go.”

I was very naive when I got this one and believed that I would probably not be in the category of those that ended up with the forever period.

Sadly, I was wrong, and I bled every d**n day from the first few weeks in until about 9 months later (just over 6 months after starting to date my current partner, poor sod) when I had it removed and switched to the combined pill. Never looked back.

That being said, this should not be used to dissuade people from trying different methods of birth control if they feel up to it. But definitely research the effects and take some time to decide what’s right for you.”

Always been kind of attracted to men so went out on a couple dates with men that were so so.

Finally hit it off with a guy, tried s**ual stuff and I was immediately not into it. Turns out I like looking at good looking men and it stops there.

“Being a crime scene investigator.

I have a bachelor’s degree in forensics. I got hired in my dream position at 23, just 2 years after I graduated. This was plan A, the dream I had been working towards since I decided to go into forensics when I was 16.

Then I quit after just 3 1/2 months. I wasn’t prepared for how intense crime scenes are. One of my supervisors had once told me that we aren’t called because someone is having a good day. And she was absolutely right.

There are so many players and so many moving parts. I was overwhelmed with what I was expected to know and remember. I could have gotten over that aspect, but the emotional and mental intensity of a scene would paralyze me.

Most **ath investigation crime scenes we were called to were s**cides, ho**cides, and drug overdoses. Almost never had someone d**d peacefully surrounded by people they loved. It was always v**lent and lonely. I had a tendency to think about a person’s last moments that led up to why we were there, and I would be overcome with emotion.

I had panic attacks at multiple scenes. I would always get the work done, but it took such a toll. One day at a burglary scene, I broke down and told my trainer that I don’t think I could do this job. She took over the scene while I went to the van and cried on the phone to my mom. I quit the next week. I finished up any open cases I had and threw in the towel. I couldn’t do it.

It took a long time for me to be okay with that decision. I knew if I stayed that job it would have k**led me.

I was praised for realizing early on that this wasn’t the job for me and getting out, but I felt like such a failure. I also felt the degree I got from university was now useless and that I had wasted thousands of dollars for nothing.

I’m very lucky to have a support system who love me and care for me. I wouldn’t have made it through this decision without them. It would have eaten me alive.

I’m about a year and a half removed from when I quit, and I still sometimes struggle. I’m in a new position now where I work closely with the crime scene investigators I worked with, and I’m much happier.”