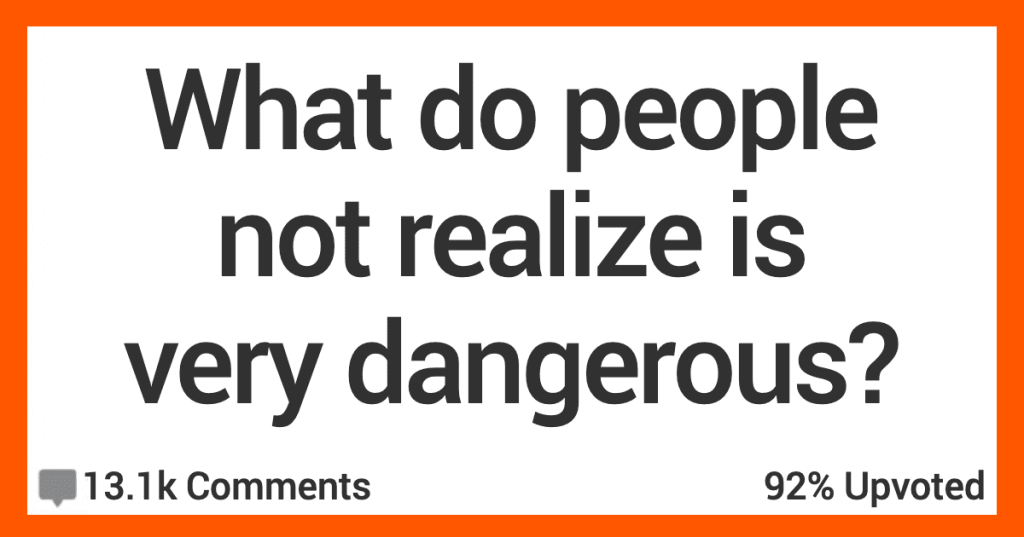 There is danger lurking around every corner out there…and in a lot of unexpected places!

But a lot of people aren’t even aware of these serious hazards, so let’s hear from AskReddit users about what most folks don’t realize is really dangerous.

“The pin setters in a bowling alley. They are well over a thousand pounds of mechanized d**th by steel and moving belts.

Some of the scariest moments of my life have been me running/ slapping the 6’ between me and the emergency shut off behind the front desk as a toddler runs, slipping and sliding, down the lane while their parents or guardians are laughing by the table because they thought it was cute. Even experienced pin setter mechanics have been crushed to d**th during scheduled maintenance.

Pinsetters are machines of convenience, entertainment, and d**th.”

“Having your hands in your pockets while doing stuff (walking stairs, riding a bike etc.)

“Ice/black ice is extremely dangerous. My grandpa was putting salt down after an ice storm the day after Christmas.

My dad was in town visiting and insisted grandpa stay off the ice. Grandpa fell right in front of my dad, hit his head hard. Woke up once in the hospital when my grandma was by his side, and then passed.”

One change of the tide and you can be a goner if you’re not paying attention.”

5. Never heard that one before.

If you leave them near a window, they can act as lenses and set your house on fire.”

The more powerful ones can inject water into you through your skin if you put a body part too close to the nozzle.”

My garage door was broken when I moved into my house.

I started watching watching a video on how to fix it and the first thing the guy said was “if you’re not a professional, or have multiple years of experience, this can k**l you. Stop the video now and call a professional.”

So I called a professional.”

Agreed, this past year has been the most stressful year of my life with my new job.

Was sick more this year than I have been my whole life.”

The human body has weirdly perfect proportions for k**ling itself from an uncontrolled fall onto a hard surface.

Getting in and out of the shower.

Hurrying up or down stairs.

Any of these that result in your head falling from about standing-height and hitting the floor or concrete or a rock can very well k**l you or somebody else.

Lots of people have had their lives ruined by this as they either caused someone to fall, fell themselves or had a close family member fall.

One bad fall in a d**nk fight turns it from a scuffle to manslaughter.”

I have seen so many videos of people trying to transport it in plastic bags, or buckets.

It is incredibly volatile, even a small amount can instantly turn into a mini inferno. Carrying a gallon of the stuff in a plastic bag is insanity.”

“Being knocked out. I guess a lot of people know that it is dangerous, but probably a good amount don’t.

We see it in movies all the time. People punched in the head with fists, chairs, pistols etc. then they wake up somewhere else, with maybe a minor headache but are pretty much good to go.

I am not a doctor, but I can only assume that sustaining head trauma that is enough to render you unconscious is something pretty serious. You have to go to a hospital after something like that, you don’t just “walk it off”.

Also fighting in general is quite dangerous, yet you see people getting in physical altercations all the time, for minor things. I have seen a video in my hometown where one guy punches another in the head, who then falls down back on his head and just starts twitching.

There is a very good chance that, the guy just ruined his own life and the life of the other dude. And for what? Because he looked at him funny or something.”

Food poisoning can f**k you up big time. You can permanently damage your body.

If something doesn’t taste right, stop eating it immediately.

WHEN IN DOUBT, THROW IT OUT.”

LOTS of people have d**d doing wedding shoots in shallow waters at the beach, or rivers, or even swimming pools.

Those dresses get VERY heavy, catch lots of drag, and easily tangle around limbs.”

Parents too often label it as “sibling rivalry” or “teasing”, thinking it’s harmless, but if left unchecked, that s**t can cause lifelong damage. When we’re kids, we’re forming our identities and our understanding of the world, and all of that can be very easily influenced. Insecurities can turn into mental illnesses, which can wreak havoc on every aspect of our lives.

Teach them compassion. Teach them to treat others with respect and dignity. Don’t worry about it making them weak or “soft”. It won’t. There is strength in kindness.”