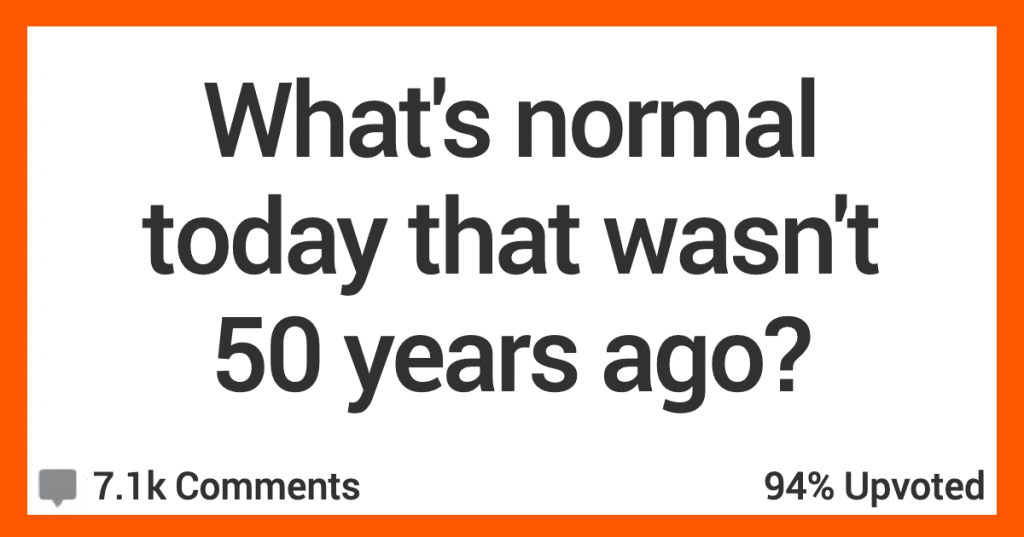 Technology is changing our lives so fast that if you time-traveled back 50 years, you’d probably feel like you were living on another planet.

One of the better changes in society.”

I can remember a time when we had investigative journalism and politicians were held accountable.

Now, we just have political cheerleaders and politicians can stand their ground and get away with almost anything.”

“Anyone getting in touch with you wherever you are. Cell phones have changed us and our cultures for ever.

Not to mention you can take your whole music collection with you on it. I wouldn’t advise loading all your LP’s and 8 Tracks in the trunk 50 years ago.”

5. Trending in the wrong way.

“Most of the people you see being obese.

Sure, there would be a bigger person or two, but not like today.

Remember the fat kid in Willie Wonka and the Chocolate Factory? Today, that kid wouldn’t be considered all that big.”

“Walking down the street by yourself and talking.

Back then you were crazy, now… Bluetooth.”

“Taking a photograph and seeing the result immediately.

In 1972, you took a photograph but before you could see it, you’d have to “finish the roll”, bring it to the local drugstore to be “developed”, wait 7-10 days and then pick up the pictures, hoping they came out well.

Today not only can you see the photo immediately, you can also edit it in many different ways and then send it to anyone else in the world, and that person will get it within a few seconds. Even sci-fi in 1972 didn’t envision this kind of stuff.”

“Nuclear power being seen as the future of the US. P

eople thought nuclear power was going to be the source of power for the country. By 1970, there were already 90 nuclear units operating in 15 countries worldwide. Oil prices and shortages made people scared and wanting better alternatives.

It wasn’t until into the latter half of the 70s that the public became increasingly worried about nuclear power. It started getting associated with destruction, danger, and invisible radiation that could k**l.

Environmental concerns increased. In 1979, the first worldwide nuclear power plant incident happened – in the U.S. at Three Mile Island. Then Chernobyl in the 80s. Nuclear power never regained public trust in the safeness of it and it has declined in use in the U.S.”

“S**king in every place you can imagine, now there are a lot of restrictions for s**king indoors and even some for outdoors.”

“Indigenous people were not allowed to practice their traditional faiths.

This didn’t change until 1978. But it still took many years before it was truly recognized.

Now our people have come out and been able to reconnect to those practices.”

Even being suspected of being gay would put you in jeopardy of a beating in most places.

As s**tty as things are these days, some things used to be much worse.”

“Complaining to HR about your boss.

13. Those places were DANGEROUS.

“Plastic playgrounds with something soft to land on.

Playgrounds were made of HIGHLY temperature sensitive metal (burning in the summer, freezings in the winter) and if you fell off the high bar (another thing that used to be a thing) while trying to attempt a cherry drop, you’d break something (hopefully not your neck).”