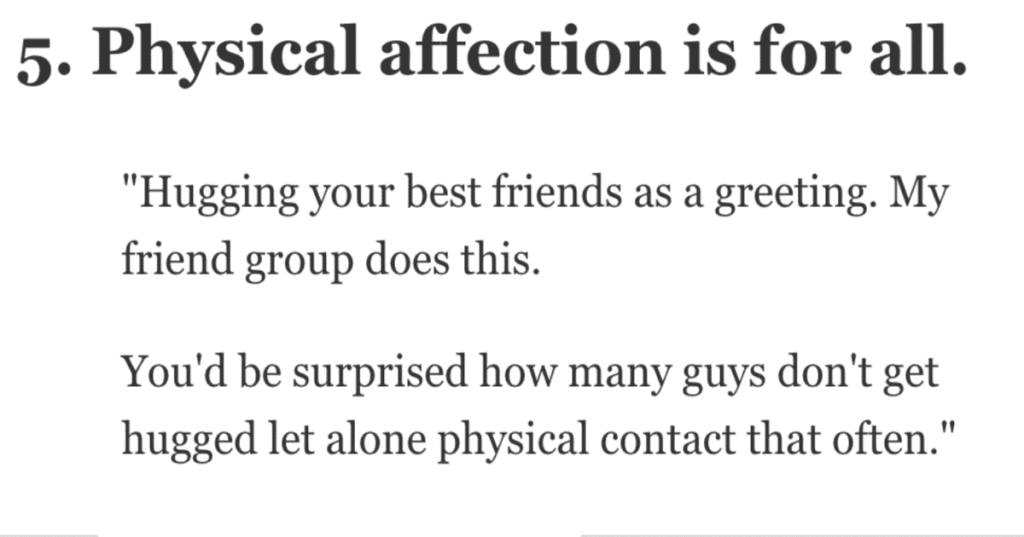 There are seemingly endless examples out there when it comes to toxic masculinity – we see them every single day – but what about men out there doing it right?

We think it’s important to share examples of exactly how to crush being a guy out there in society, too, so here are 14 instances you’d definitely want to emulate.

14. A full spectrum of human emotions.

“If you have ever read The Lord of the Rings, two characters specifically pop into mind: Aragorn and Samwise.

They both have zero qualms showing and feeling the entire spectrum of human emotions (from joy to sobbing in grief), they openly hug and kiss their fellow travelers (no matter the gender), provide unwavering support and encouragement, and risk their lives on a moment’s notice just to protect the weak around them all while never complaining.”

13. Everyone knows a creep when they see one.

“Saw a drunk girl get brought to a room once. My buddy and I went in and pulled her out and took her home.

We’re pretty big dudes, so the creep who was with her got real scared. So I guess that’s both versions of masculinity in one example.”

“Admitting your own limitations, sharing your experience and only looking down on people to help them up.”

“When men stand up for people, especially when they’re not there to defend themselves.”

“You see that someone is having a problem, and you start trying to solve it. For example, you see somebody pulled over to the curb with their hood up, and you ask them what’s wrong. ‘My car won’t f**king start.’

You say, ‘What happens when you turn the key? Does it crank or does it just do nothing?’ And then they say, ‘It just does nothing.’

I’m just parked right over there. I’ll bring car and my jumper cables and we’ll see if we can get ‘er going.’ And it doesn’t have to be a problem you know how to solve.

You just talk to the person, get their view of the problem, and you just start throwing out ideas.”

9. This channel is just the purest thing.

“The ‘Dad How Do I’ YouTube channel — using your skills and experience to help others who might need it.”

8. Nothing wrong with it.

“Showing your emotions. No need to bottle them up and explode when it’s too late.”

7. Kindness is never the wrong way to go.

“A man who encourages and helps other men to take care of themselves and is humble and selfless.”

“Harry Styles — he doesn’t subscribe to typical standards of masculinity, which will inevitably inspire others to do the same.”

5. Physical affection is for all.

“Hugging your best friends as a greeting. My friend group does this.

You’d be surprised how many guys don’t get hugged let alone physical contact that often.”

4. No one knows everything.

“When a man can admit he doesn’t know much about a topic but is willing to learn and understand it.”

“You can carry your wife’s purse or your kid’s diaper bag with the pictures of cute little whales and monkeys and stuff on it without worrying if your d**k’s gonna fall off.”

2. Use your powers for good.

“My boyfriend is such a gentle soul but he could definitely seem intimidating just by his size. He’s 6’2” and pretty athletically built.

He’s used his stature to ward off creeps for me on occasion before I even know I was being creeped on, and for other women we’ve seen in uncomfortable situations in public before.”

“Being someone others can rely on.

Real masculinity is about being someone that can help, being kind, and solving problems that some people can’t.”

I love all of these stories; they’re just too good!

What other examples of positive masculinity have you seen in the wild? Share them with us in the comments!