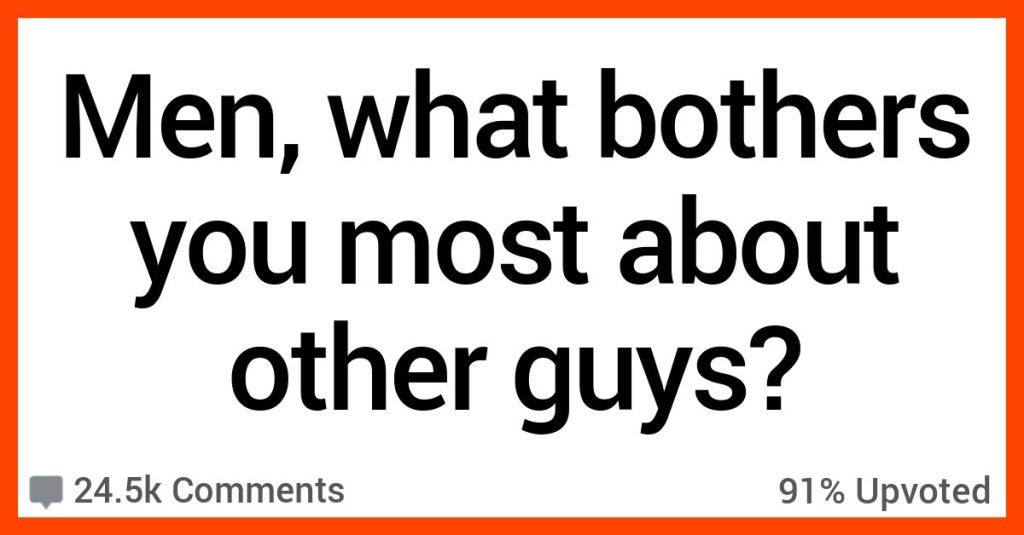 14 Men Talk About What Bothers Them Most About Other Guys

It seems pretty ridiculous to even try to sum up what ALL men or women or like, so I prefer to get down to the nitty-gritty a little bit and put them in categories.

And while I know there are exceptions to the rule, I’m not a huge fan of the kind of country club fraternity boys that treat everyone like dirt and think they can do whatever they want, whenever they want.

And now we’re gonna hear from some other fellas.

Guys, what bothers you most about your fellow men?

“I just h**e some men who, when in a group, keep trying to establish dominance.

They usually do that by being loud, interrupting people and laughing at you, instead of laughing with you.”

“When they have to make d**n sure they show they’re an alpha male, like they’re an animal or a caveman.”

“Honking or whistling at women on the street.

Like WTF do you think is gonna happen buddy?

“Men that think it’s “unmanly” to drink delicious cocktails. Why is it suddenly unmanly to have a sweet tooth when it comes to drinks?

I mean you don’t go to someones wedding and then say “ha cake? No way I’m a real man”.”

Lots of women are outright scared to directly turn down a man’s advances, because some will harass them or get v**lent.

I think it’s one of the big reasons ghosting has become such a common thing in dating.”

“Older men h**e taking instruction from young guys like myself in the trades.

Instead of dropping their ego and feelings at the door, they come in with no experience and wont allow me to teach them… it’s a lot of patience and I find it very frustrating.

You may be older but shut the f**k up and let me teach you something bud.”

“When they try to act tough, like aggressive tough.

Buddy, you aren’t bada**, you’re acting like a child with a temper.”

“That if you compliment someone’s appearance, either male or female, they automatically assume that you’re hitting on them.”

“Guys that become completely different when there’s no women around. Guy at work is always nice to his female co-workers.

Second they’re gone, they’re a bunch of dumb b**ches in need of his manly love. I’ve heard him tell women that his having 3 sisters gives him a great respect for them.

He also told me (when the ladies weren’t around) that having 3 sisters gives him insight to their weaknesses and allows him to easily take advantage of them.”

“The older I get the more I am hating men revving their loud cars and motorcycles.

I live in a pretty busy area of Dallas and especially at night they just love to show off and screech their tires and rev their loud mufflers to where the whole area can hear it.

I am getting too old for that s**t. And sorry if this is s**ist but you know it ain’t women. It’s definitely men.”

“Bashing their wives. Like, you chose to marry this woman and they think it is cool to make her look like s**t in front of other people.

Grow the f**k up. I love my wife, she my best friend and my favorite drinking buddy. I know I am in the minority, but maybe she’s not the problem, you are.”

“How they can a**se the f**k out of their girlfriend mentally and/or physically and then act like they treated them like “a goddess” when they leave them for somebody better.”

“Talking over or being dismissive of women in the workplace.

I’m finding it’s getting better with the younger generations, but it’s still embarrassing and frustrating to see.”

“Guys who think being aggressive means they are being assertive.

Just because you’re loud and angry doesn’t mean you are a good leader.”

Okay, men, what bothers you most about other guys?

Talk to us in the comments in let us know.