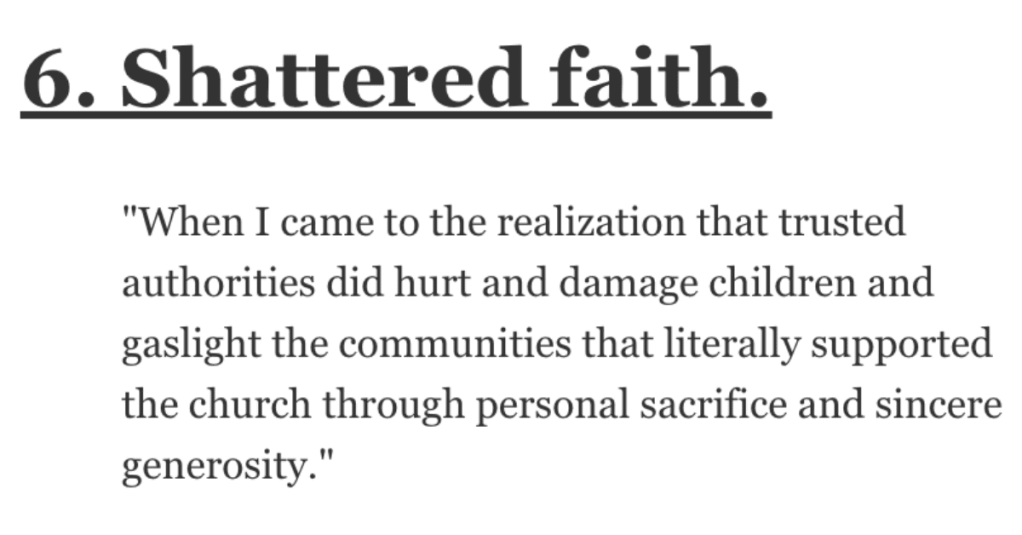 14 People Open up About What Ruined Religion for Them

I’ve met a lot of people over the years who’ve told me long stories about how they were raised in very strict religious families and they eventually became so turned off by the rules and what they saw as hypocrisies that they eventually abandoned the whole thing.

Swore it off forever.

And I guess that makes a lot of sense if a certain kind of religion is forced on you from a young age and you eventually get tired of it.

Here’s what AskReddit users had to say about what ruined religion for them.

“Was told that dinosaur bones were planted in the ground by Satan to trick us into believing in evolution.”

“Learning that my Mom got alienated and bullied after she tried creating a single mom’s club at our church.”

“My parents told me at a young age that I would go to hell for asking the question “how do we know god is real.”

They could have simply said to read the Bible or something like that.

But instead they told me that I would go to hell, I guess it was the idea behind “blind faith”.”

I was very little when he died at 3 days old, but it always bothered me being taught that Jesus was the only man that ever lived without sin. I thought “what could this helpless little baby have done that was a sin? He never even cried?”

When I asked my very catholic grandmother about it she told me to watch what I say because I was being blasphemous.”

“When I came to the realization that trusted authorities did hurt and damage children and gaslight the communities that literally supported the church through personal sacrifice and sincere generosity.

It was the absolute definition of disgrace and I am in agony that it was ever even tolerated.”

“Being kicked out of Christian school prior to the third grade because my Mom bought the wrong edition of the Bible.”

“The non-answers to all my questions as a kid.

“You just have to have faith” is a dumb way to respond to an inquisitive mind.”

“In the third grade my teacher (who was a good person) didn’t believe that cavemen existed because they weren’t mentioned in the bible.

My teacher gave my class a lecture about how cavemen didn’t exist despite there being a lot of evidence. In the fourth grade my teacher was required to teach the theory of evolution to the class by showing a documentary she also gave a lecture on why evolution was fake.

During my time in middle school i realized that it was all crap.”

“How hypocritical the people in church were.

They would judge you and condemn you for drinking as a teenager yet I would see the pastor and all the deacons out drunk and driving home at friends houses whose parents went to the church.”

“My family went to a large church when I was young.

One day the pastor was on the news because it turns out he lived a second life at strip clubs and got arrested for kidnapping and pistol whipping a guy who owed him money.

That was the first time I questioned my faith. How could a person act so stone-cold confidently on stage about everything he was preaching and be a total fraud?”

“The first world religions class I took in college.

Realizing other people in other faiths also believed their religion was true gave me the courage to consider maybe Joseph Smith didn’t really see God and Jesus in a forest in 1820 a few years before sticking his head in a hat to look at magic rocks that helped him translate golden plates inscribed with the history of Jesus visiting North America and a Jewish family sailing around in a wooden submarine lit by rocks god touched to make them glow.

Then I thought, “yeah none of that happened”.

And it was all over for me.”

“I grew up very religious. My father killed himself when I was young. We were back in church before my sister and I went back to school.

The first day back at church, it seemed that the sermon was tailor made for us, as the preacher went on about suicide being against God’s will and there was no chance to repent, so those who commit suicide had no chance at redemption.

Essentially: “Don’t kill yourself. You end up in Hell. Your family will never see you in the Kingdom.”

That was the last thing a teenage, rebellious, Shagnasty needed to hear. I quickly disassociated myself from the organizational part of the church. I occasionally went to Church camp and other events with big groups of kids my age, but I never went back to church again.

As one final middle-finger to that pastor, I later banged his daughter when we were on a trip to Ichthus Festival.”

This was the inaugural season of the Carolina Panthers, and because the stadium in Charlotte hadn’t been completed yet, they played their home games at Death Valley.

It was cool, the town is well equipped for tailgating and stuff. But not on Sunday. Sunday is church day.

I was a Methodist. I well recall the pastor of the Clemson United Methodist Church allowed himself to be quoted in a a newspaper, complaining that the Panthers organization owed all the churches in town for the donations they didn’t get on Sunday because everyone was at the big games.

The donations. Not the souls that weren’t saved. It was the money.”

What role does religion play in your life?

Talk to us in the comments and tell us what you think.