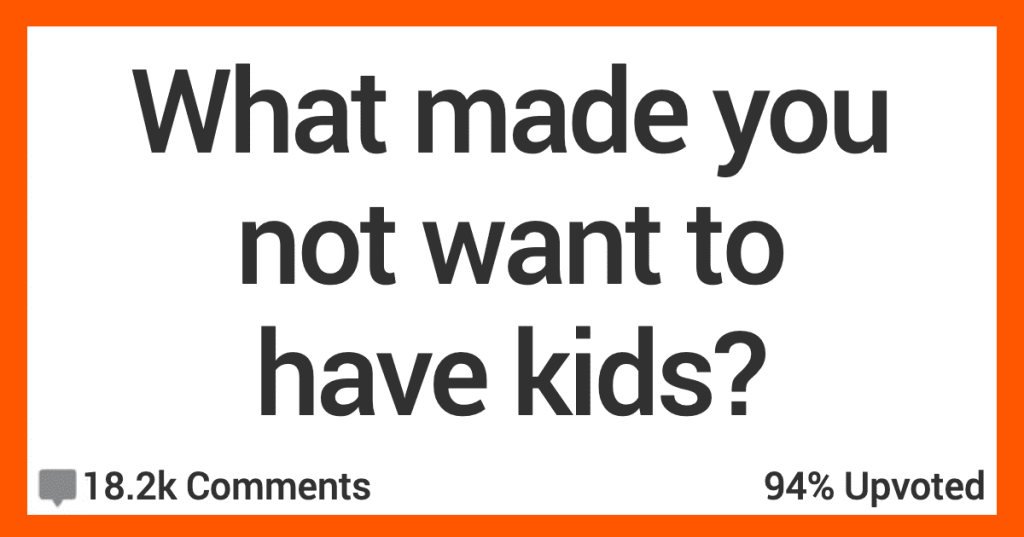 Hey, having kids is DEFINITELY not for everyone.

And some people know they aren’t cut out for the parenting life from a young age.

Let’s hear from AskReddit users about why they don’t want to have kids.

“The sheer fact that I enjoy peace and quiet is enough.

I love my godson and would d** to protect him but I don’t want him living with me (godfather responsibilities aside).”

“I raised my siblings. I’m done.

Teaching them to read, acting as a lifeguard any time we were around water, trying to patch their wounds or reassure them school isn’t so scary…. My brother is dyslexic and my sister has a learning disability.

I taught them both to write their names and would always help them with homework before working on my own. I don’t recall my parents being anywhere nearby in 95% of my childhood memories. I love kids but the stress of raising kids as a kid has deterred me from ever even considering that sort of responsibility again.”

“I had a child born with Duchennes Muscular Dystrophy.

I felt incredibly guilty for bringing such a lovely child into this world with so much difficulty he faced.

After he passed away, I never wanted to bring another child into this cruel world.”

Plus I’m terrified of the idea of pregnancy and labor.”

They weren’t good examples to learn from.”

And it’s cruel/wrong to have them unless you actually want them.”

“I used to babysit and worked summer camp when I was a teen, and it was okay. Best part was handing them back over to their parents at the end of the day.

I finally got the courage to say to my parents about 3 years ago, “hey, just so we’re clear – you guys do realize I don’t want kids, and that you won’t be grandparents unless I get furry four-legged “kids”, right?”.

They assumed as I’ve made off-handed comments before, but they said it was good to have the confirmation.”

“I am a teacher in HS. I like teenagers, despite their bad hair cuts, tracksuits, bad music and drama.

But they can form a coherent sentence and be fun at times. Still I like to go home and not deal with any of that.”

“My wife is bi-polar and I have recurring depressions.

We figured adding kids to the mix wouldn’t be fair to anyone.”

“I have terrible panic attacks and OCD.

There is a strong genetic component, so watching a kid suffer like I did is just…unbearable to consider.”

“I wouldn’t be opposed to being a mom, but i 100% don’t want to give birth. I also don’t want to hear about anyone’s child birth experience.

I’m in no way going to be excited to hear about the pain, mess, chaos that you went through in delivery room just because I have a v**ina.”

“People have asked me why I never had kids for years now.

And I always reply with, money and silence.”

“People always told me I’d change my mind so I always waited to feel it.

I never did and I feel like it was such a disservice to me to be told that.