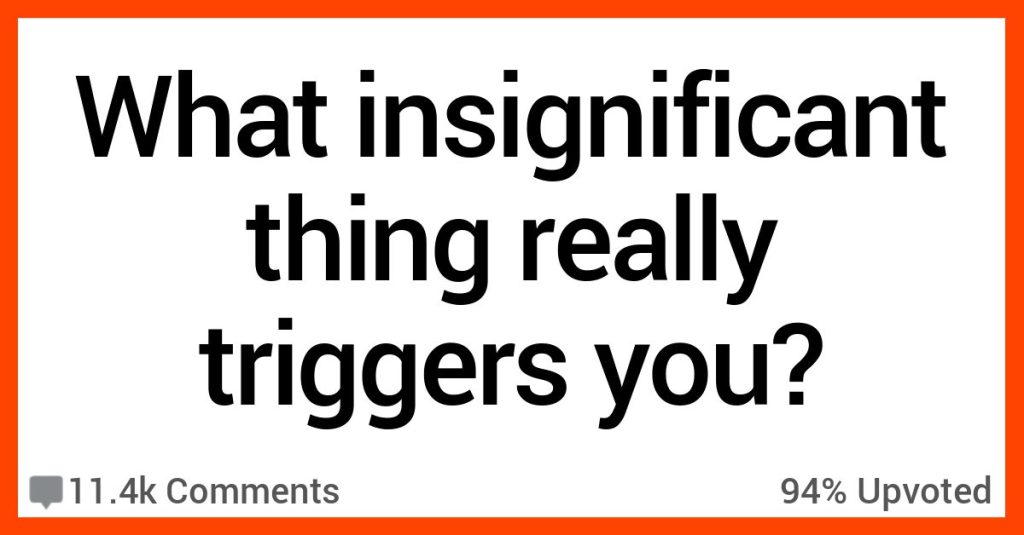 Listen, I know that I need to let this go, but I just can’t for some reason…

When people talk on speakerphone in public OR listen to music in public without headphones, I love my s**t.

I know, I know, I need to just brush it off, but it really pi**es me off in a major way.

And I bet you have things like this too, don’t you?

AskReddit users talked about the insignificant things that really trigger them.

“People with absolutely no self awareness or regard to someone’s else’s feelings.

If your kid is sick, please do not have a cookout on the weekend inviting everyone over. Do not tell us to come over and eat/hang out and then once arriving tell us that your kid has been sick but “everyone else is fine”.

“ALL OF YOU WHO DON’T USE YOUR SIGNALS WHEN DRIVING.

F**KING USE THEM, EVEN IN THE TURNING LANE.

YOU HAVE NO EXCUSE.”

3. Feeling bad for them.

“People who name their children common names but arbitrarily spell them completely different just to be unique.

“My name is Michael but it’s spelled Mykael…”

I feel bad for the child who will never have a new teacher say their name correctly during role call their entire life.”

“People giving up the right of way when driving.

You’re not being nice and polite, you’re being stupid and dangerous.”

“People who show up extremely late to plans. Bonus points if the plans are the late person’s idea.

I get the courteous 15 to 30 minutes late. Honestly thirty minutes is wayyy too late for me but I’m forgiving enough, but after that though not only are you being rude but to me your saying that your time is more valuable than mine and that’s just disrespectful.

I am shocked at how many times people will be an hour or longer late to plans. It bugs me.”

I don’t comment, but it makes my eye twitch.”

“Biting my cheek when eating.

After doing it twice I literally throw my food in the d**n trash because I’m furious.”

“When the lower dishwasher rack continuously slides back into the dishwasher while I’m trying to load/unload it.

It fills me with rage every time.”

“People speaking to me and starting a sentence with “you need” followed by their unasked for opinion.

Hah, no buddy. I need to get the f**k away from you before I haul off and knock your s**t loose.

My mother did that me and it’s for sure a trigger.”

“My 51 year old partner has suddenly started saying ‘Pacific’ instead of ‘specific’ and it bothers me so much I get a headache thinking about it.”

“I almost got into a fight with two fans of the opposing team after a hockey game because they got to the bottom of a huge escalator with like 100+ people on it, took one step off, and just stopped.

My friends and I were right behind them and had to push them out of the way to avoid being crushed by the wall of humanity behind us, and they started posturing and yelling at us like we were the idiots.”

“People wanting to talk about politics all the time.

I was at my birthday dinner and the table next to us just kept chiming in with every political hot take.

I’m celebrating my birthday with friends, leave me alone.”

“People saying they have “Big Feelings” about things.

You aren’t a toddler learning how to express yourself, you are a grown adult.”

What small things trigger you?