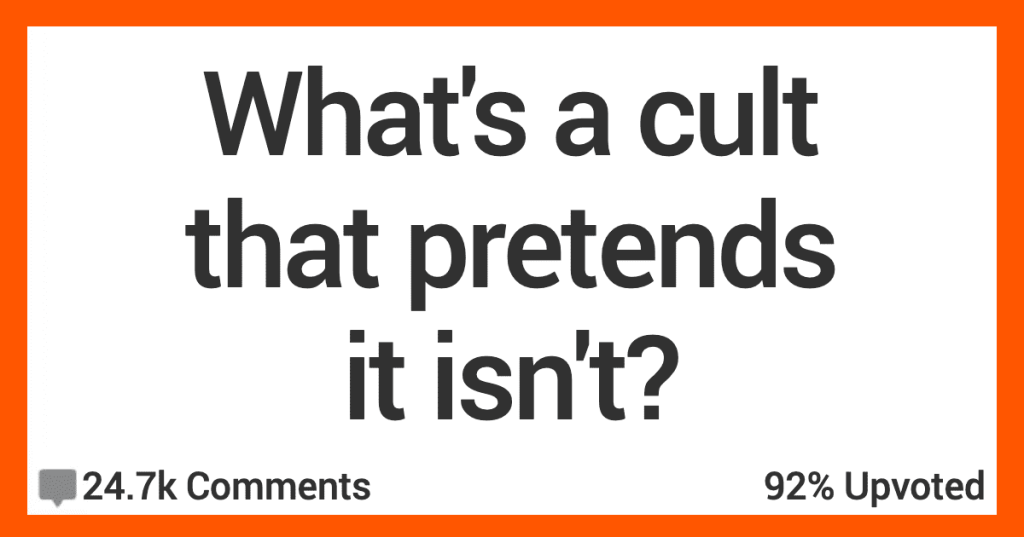 Is it just me, or do A LOT of things seem like cults these days? Even though the people who partake in these activities and belong to these groups vehemently deny it…

I think I’m right about this one!

So let’s see what AskReddit users had to say about this!

Grew up going to one of these churches. Long drive to a small church hidden in the woods.

They honestly believed only their members were gonna make it to heaven. We saw some crazy stuff in that building.”

Despite being accused of being a pyramid scheme, they continue to function similarly.

There are some people from my childhood who became addicted to it, and they act very much like members of a cult.”

“A lot of my friends and family tell me I’m unknowingly in the cult of Jeep owners.

I mean, it’s a Jeep thing. They wouldn’t understand…”

I once attended a convention as a consultant’s guest in an effort to persuade me to go.

Very Stepford-like. She also failed to inform me that you were supposed to dress up, so I arrived in jeans and a hoodie.”

“45 minutes of exercise followed by 45 hours of talking about your exercise.””

My mom likes to tell the story about when I visited there as a high school senior. It was a one night sleepover tour.

When she came to pick me up the following day I was waiting at the curb, sitting on my packed suitcase.

I hopped immediately into the car and the first thing I said was, “It’s a cult. Let’s get out of here.””

“I used to work for Phish fans at a beer bar (craft beer can also be kind of culty, depending who you’re talking to), and observing their behavior was honestly hilarious.

Since it was a bar, I spent a lot of casual time with the owner and all his hippie phish friends. They were a hoot! I teased them all the time about their obsession with Phish and they were always good sports.

These are people in their late 30s/early 40s with disposable income who love a band so much they travel around the country every year to see them! I think it’s sweet! They’ve all been best friends for like 20 years because of their shared love of Phish.

I’m not really into it, at least not when it’s played over a speaker at a bar or party. They did take me to a show, however and got us all floor seats, and I have to say….it was one of the funnest concerts I’ve ever been to!! Based on my experience, most Phish fans are nice, accepting people.

There are exceptions, I met plenty of Phish elitists or just pure a**holes, but for the most part, everyone is just excited about the music, cares a great deal for the band members, and is happy to introduce new folks to their crowd of friends.

That being said, yes, it’s absolutely a cult, no question.”

You are basically at their whim. You are expected to pay tuition, costumes, dance wear, dance shoes, travel fees, competition fees, production fees, tickets, and do volunteer work and give up your entire schedule.

If you complain at all about anything valid or not- they shun you by not giving your kid a good role or not moving them up a level. And they withhold attention to your child.

You literally must schedule all life around ballet. And pay thousands and thousands of dollars so your kid can be in the back.

If you quit all the former dance parents and friends will shun you.”

I had a friend who missed one single day because she was sick and got yelled at for it in front of everyone.

She literally practiced on the team every single day.”

I live in the South. I’ve seen people nearly get into fistfights over this s**t.”

“High end raiding guilds in World of Warcraft. I’m not sure how much anymore, I haven’t played in a couple years, but especially back in Vanilla-WotLK days

Being in a raiding guild really felt like being in a cult. Like, you were pretty much expected to give up everything outside of raiding. It would take hours upon hours a week of scheduled time with the guild, then many more hours outside the raiding to work up your professions, grind dailies,

I’ve known people to neglect their health, kids, jobs, school, family, everything because their guild was determined to be the best on their server. You listen to the guild leader for your schedule and you live by it. You follow orders.

And of course you /can/ technically leave at any time, and you’ll be kicked out if you don’t perform well, but, it’s such an addiction that quitting it is like quitting a drug. It was easier for me to quit s**king than to quit raiding.”

Their vision is to “enlighten” the world. I’ve done their basic course, 9 days, which did have real good parts (mid week), but the people there were weird. Some of them were straight outcast, weird, probably rejected by society somehow. One guy had a “happy face”.

He kept on smiling because that would make him happy. I believe it to some extend that if you smile, you get to feel more happy, but this only works for a small part. He did it all the way. He coached me with some excercises, and surprisingly he really did help me – but man, was he weird!

During the day-opening they gave all of these subliminal messages, pushing you to subscribe to the master course. If you did, you got a badge with a star on it, so everybody could see it, and the rest of the week you got compliments and friendly conversations because of it.

Right after lunch they showed videos of Harry Palmer, the founder, who did instructional or educational videos. These were horrible to watch, and after two days I skipped them. You had to leave lunch early, sometimes with an excuse, because otherwise they wouldn’t let you go. They even checked the toilets. With 400 people doing the course, they didn’t notice my absence, so that was good.

It was amazing how quick I ended up talking to the top three people during that week, probably because I resisted. They were fascinated with me somehow. It was a strange group of people. After a while I realised that I didn’t want any of them becoming my friend.

After that week they kept calling me each month, and I couldn’t pick up because I didn’t know how to say no to these people. They are excellent salesmen and know how to keep you from saying no, like “but don’t you want to be happy?”

The trick was to say “no” real plain, decisive but not too, and never to use an excuse. If you said that it was too expensive, or that you had a holiday planned, they offered to help you ask for money from your boss for this training, or to help you to cancel the holiday.

They did teach me some real good tricks, and it did help me clear my head for some time, but in the end I didn’t want to be part of it. If you went all in, it meant daily contact with another Avatar-“friend” to do the excercises to keep you awake. It creeped me out.”