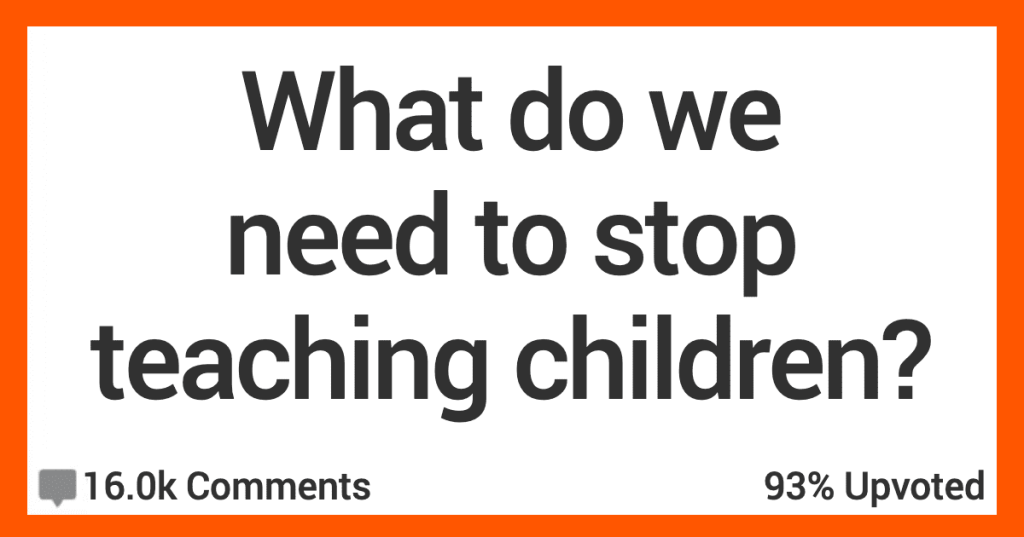 Well, this promises to be an interesting discussion…

Because if there’s one thing that gets people fired up these days, it’s kids and what they’re being taught.

So let’s see what AskReddit users had to say about this topic.

“Growing up doesn’t mean you can’t have fun.

As a kid I had about 5 board games in the cupboard and they were boring or we’d played them a hundred times.

I’m 40 now and our board game storage unit just ticked over 100 games.”

“You can get what you want if you’re nice. It teaches children how to be manipulative & dishonest.

Instead, teach them to handle “No”.

Too many people grow up and get offended at being told “No”.

Teachers & Parents want their children to learn how to ask for things in a polite way – but not how to handle rejection.

My brother teaches children and he will actively tell kids “No” and encourage them to find alternative solutions that don’t infringe on someone’s decision.”

“That failure is something to be ashamed of and to avoid at all costs.

We all fail sometimes and we need to be able to accept that.”

“That you need talent to be good at something.

So much can be learned, practiced, and become a skill.”

I am a 3rd grade teacher. My students know I won’t force an apology. Instead, I speak to the students about their choices and how it made others feel. I’ve found that, once students realize what they did, they do apologize on their own and the other student does accept it because they know the apology is sincere.

Often times, students will even try to resolve the issue on their own. It’s common for students to ask me if they could speak alone in the hallway. They then return proudly stating that they resolved their issue.

Obviously, if something is not resolving itself, I’ll continue to help students through it. I will also step in for more significant disagreements. However, I’ve found that students are able to resolve issues an overwhelming majority of times. However, they are never truly resolved with forced apologies and acceptances of forced apologies because the underlying issue is still there.”

“To push down their feelings and never cry.

You don’t heal unless you work through your emotions. Support them, don’t scold.”

“That you need to be friends with everyone.

I’ve had to tell my kids this. Like when kids in their class don’t ever want to play with them. Not everyone wants to be your friend, and that’s ok.”

As a former teacher, it does nothing to address the issue.

It’s important to know your weaknesses and focus on your strengths.”

It’s not inappropriate for a child to know basic anatomy, and this is only advantageous to predatory people.”

““Please” isn’t a magic word. It often won’t get you want you want.

“I’m sorry” doesn’t erase a wrong and is only one small part of an apology, which the wronged party is not obligated to accept.”

“That while they are special, they are not any more special than anyone else.

“The goal should not be to avoid failure, but to avoid harm in failure. Let your kids go skiing, but on a hill where the ski patrol can get them medical attention if they break a leg.

Let them go outside without a coat. When they get cold, and they will, ask if they have learned about cold, then give them the jacket you brought. You can deliberately let them fail so they learn how to handle failure gracefully.”

“Kids learn by watching us.

Whatever we want kids to do or not do starts with grown-ups addressing our own hang-ups.

What do you think we need to stop teaching children?