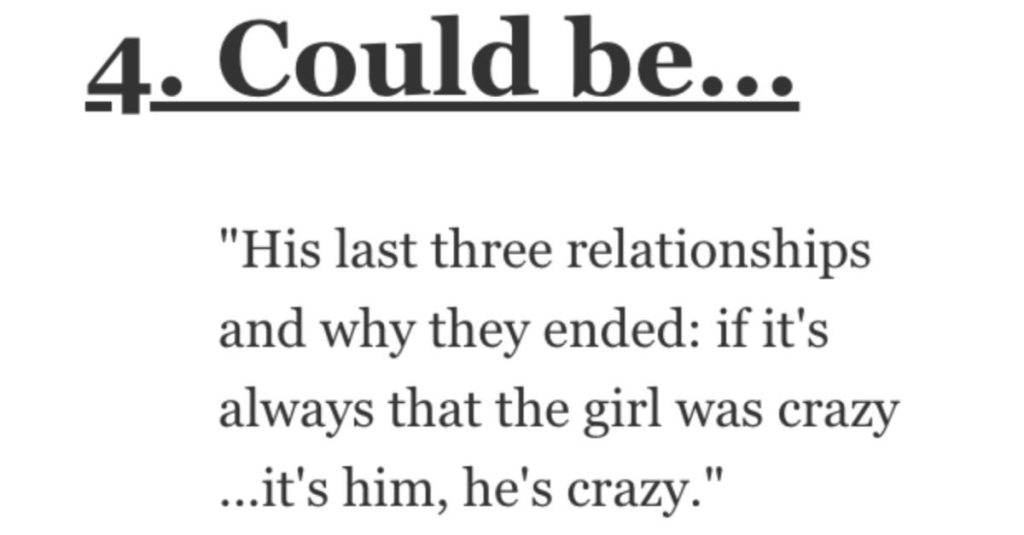 Men, What Less Obvious Red Flags Do You Want Women to Know About? Here’s What Guys Said.

The more you know, right…?

That saying is true for a lot of things and it definitely applies to the discussion we’re going to have today.

Men took to AskReddit to share less obvious flags that they think women should be aware of.

“Don’t ever be fooled by how a man treats you.

Look at how he treats unattractive women and other men.”

“If a guy is doing the minimum of what you want in a long term relationship at the beginning, it’s going to be well below your standards after a few years.

I would expect about half of what you see in the first year.”

It’s leaving wiggle room so he can claim he wasn’t lying later.”

“His last three relationships and why they ended: if it’s always that the girl was crazy …it’s him, he’s crazy.”

“If he tries to make you feel crazy/invalidate your feelings for being uncomfortable about something or for having boundaries, run.”

Narrator: He was in fact not a nice guy. Some would even go so far as to describe him as an a**hole.”

“If he’s rude, selfish and possessive before you’re dating, he will NOT change once you start dating.

I don’t know why so many women think that a man will “have an epiphany” and become better once they get in a relationship.

“When he looks to you as his sole source of happiness, entertainment.

This usually means that they lack the ability to manage their own emotions or have healthy coping mechanisms.

In addition, if you are in it for the long term, there will be times that you will get sick of each other and a guy needs some hobbies that can take his attention away to give you space. This can be an open door for manipulation.”

“Don’t date someone who dismisses or invalidates your feelings even in the smallest ways and not see anything wrong with it.

All feelings matter regardless of how insignificant or weird or even disgusting they may be, and talking about them and being understood in return is the first step towards a healthy and safe relationship.

If your partner has the inability to realize this is likely signs of deeper problems under the surface and you don’t want to discover that further into the relationship.

Also avoid anyone that enjoys talking s**t about others or enjoys sharing drama. It may seem cool and funny especially when he’s got such an opinion but that’s also reflective that he’s the kind of person who enjoys judging others and looking for emotions to stir. So imagine what he’ll do when you break up.”

They never seem to have their own opinion especially if it conflicts with yours.

“Yes men” are for corporations not relationships”

“Don’t date someone under the assumption that they’ll change something fundamental about themselves.

Not fair to either of you.”

What do you have to add to this conversation?