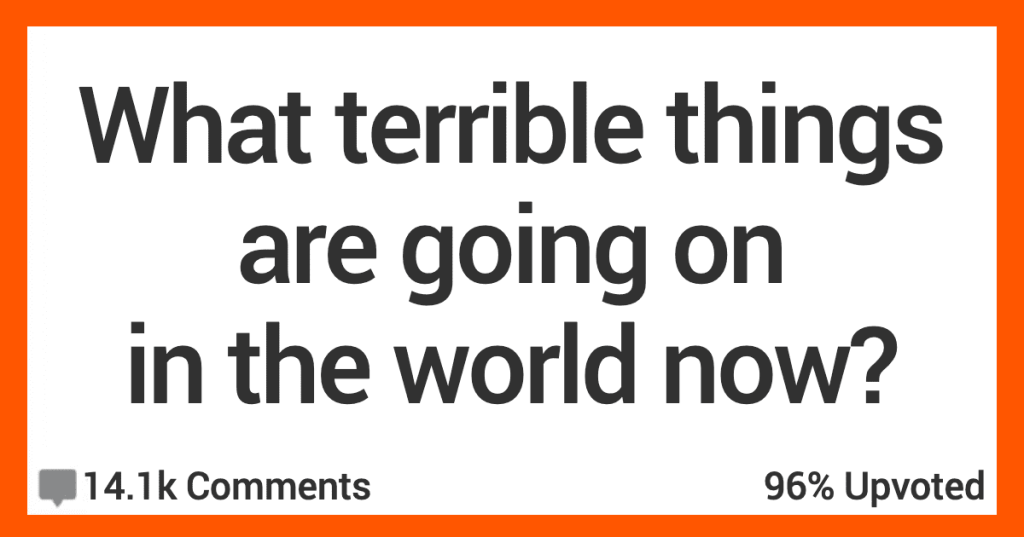 Our lives are so fast-paced these days that unless you’re specifically seeking out certain news and information, you’re probably going to miss a lot of things.

And that’s why we think these responses from AskReddit users are so important.

Take a look at what they had to say about REALLY bad things that are going on right now that most people don’t know about.

When I was in the psych ward, there were 30 men and 4 women in my unit.

Obviously no locks on any doors (except the ones to get out). I was terrified every night.”

“If you are a journalist or reporter, i am begging you to please report this!!!!

There’s a major CPAP recall that has affected half of the machines out there and there’s no fix. People are literally d**ng because of this and the DOJ needs to step in. Patients don’t wear their CPAP mask? They can d**. If they do wear it, they are exposed to carcinogens and can lead to cancer.

Ventilators affected as well. It’s been over a year and Philips only wants to reimburse $50 for the machines. We have patients waiting months for a machine. The sleep world is affected including our jobs and lawyers. NO ONE is talking about it! The FDA recall is serious.”

“Bacteria are becoming more and more resistant to antibiotics.

The widespread use of antibiotics for healthcare and agriculture (mainly) have caused bacteria to adapt.

This means that in the not so distant future, we may have new epidemics caused by multi-drug resistant bacteria, which will be difficult to treat.”

“In a handful of really poor regions around the world, managers of orphanages sometimes tip off the local pimps that a girl is about to age out of the system and end up on the streets.

When the managers are actually half way decent humans, the tip money they get goes to feed the smaller kids. Sh**ty managers obviously view that money as a side hustle to make having the main job worthwhile.”

“Most shrimp caught near SE Asia and parts of Africa are caught by literal slaves who are forced onto slave ships or sold by their families into servitude.”

They’ve been kidnapping and then a**sing kids (for money) for the last 30 years, all legally.

TTI Survivor here… 17 years later, the place I was sent gives me nightmares every single night.”

“I moved to Sydney 2 weeks ago, and I can’t believe how many public s**cides there are. It’s almost every day someone k**ls themselves from jumping from a building or in front of a train.

I catch the train almost every day and it feels like a matter of time before I see one happen myself. We’re in a massive mental health crisis right now and it’s extremely hard to get help.”

“The extent of fisheries’ and ocean life’s collapse. Alaska just put the emergency brakes on its entire snow crab fishery as the numbers suddenly fell off a cliff. Same for many salmon species, wild fish, etc.

“Plenty of fish in the sea” seems like an saying that will be true forever, but it won’t be. I have seen estimates that there would just be NO commercially-viable fishing by 2048.

We are scraping the bottom of the ocean and emptying it of life.”

“The “Clients” of Jeffery Epstein and Ghislane Maxwell are still pe**philes, and still free, putting innocent children at risk.”

Indigenous children are being sold for r**e in the state of Guerrero like pieces of meat.

Gov’t turns a blind eye and civilians are threatened by the cartel. It’s messed up.”

“Mass kidnapping of school children in Nigeria and other African nations and the only one talking about it since 2021 is UNICEF.”

“The Highway of Tears.

A stretch of highway in British Columbia where women (mostly Indigenous, and also some men) have gone missing for decades.

Known somewhat in Canada but largely ignored by the general populace.”

“The drug cartels are a HUGE problem for a fair amount of Mexico. It’s not everywhere but big where it needs to be.

Mexico has one of the best demographic curves of any country for workforce. A beautiful country with anything from jungle to mountains to desert. The normal people are friendly, hard working, and stuck in a bad spot.

China is also working with the cartels to ship fentanyl and who knows what else to the US and beyond.

Mexico is missing out on long term growth because of drug money and corruption. Mexico could be the next “world’s factory”…access to the Atlantic and Pacific…a workforce ready to work…plus the tourism if so much of the world could just drive around beyond a resort and not feel like they could be murdered.

We have prob 30k Mexicans in a hundred mile radius of me here in middle America and when you get to talking with them they love Mexico but realize the issues in Mexico. Even a cheap in US dollars doubling of the Mexican wage would do wonders to having a great trade partner next door, slowing border jumpers, and eliminating the cartel strength.

I honestly hope Mexico can get things in order and recognize that if they eliminate the quick cash corruption the country could flourish.”

“9% of Eritrea’s population is slaves

The prevalence of modern-day slavery is way more than people like to talk about.”