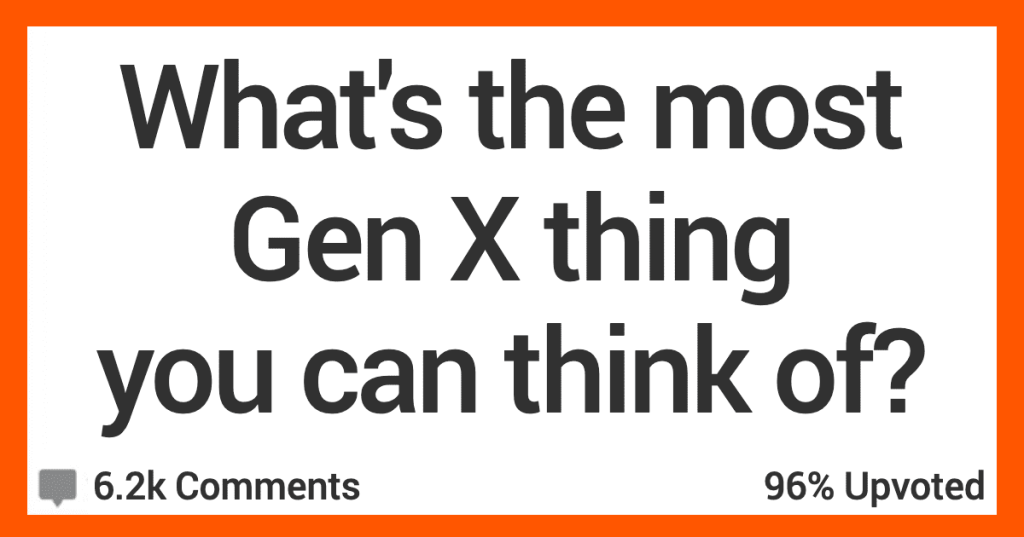 Those folks have given us a lot of good things, don’t you think?

And now it’s time to hear about the most Gen X things EVER.

How did they ever make money?

No one ever paid them.”

“We would call the local rock station to request a song then sit there with a tape at the ready to hit record as soon as they played our song.

Repeat that about 10x and you’ve got a nice mixtape.

4. Have that thing ready…

“Having a pencil ready to fix a cassette.

That absolute panic when you hear your stereo about to eat your favorite cassette!”

Singles is one of my all time favorites and I feel like no one I know has even heard of it!”

“Pong, space invaders, being the last generation to have to walk across the room to change the tv channel, being able to fix the tv by pounding on it the right way, getting the brown box for the tv and there only being 3 stations.

Also being totally forgotten about by the other two generations. Like door mice.”

“Never getting mentioned in the news.

It always goes from gen z to millennials to boomers.”

Ready to record on the vhs when my favourite bands came on.”

“After seeing Dirty Dancing, I had the great idea to get my hair permed to look like Jennifer Grey.

That ended my perm fetish forever.”

Actual cassette tapes recorded on a boom box from songs on the radio.

Bonus for Ramones tunes as part of the mix.”

I yell about lentils running down the stairs every time I make them and my Gen-Z kid thinks I’m an idiot.

The noise was deafening in the halls between classes!!”

Working with a handful of Gen-Xers and the only music they can consistently agree on is the Pearl Jam station.”

Before Gen-X, graphics weren’t good enough, and after Gen-X, you’d play the games on your own home console.