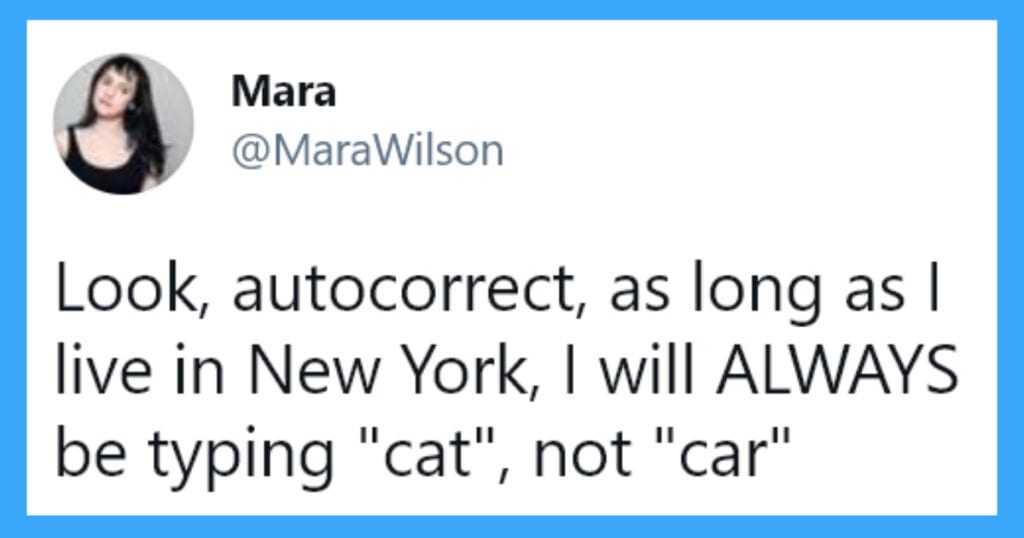 15 Autocorrect Tweets That Are Ducking Perfect

Autocorrect is a mechanism in our phones and other devices that’s supposed to save us from our own clumsy thumbs and lack so spelling skills so we don’t look like idiots in our textual correspondence.

And yet, more often than not, it feels like they actually cause the idiocy to occur.

Would we be better or worse off without it?

That changes quite a bit.

Gather the flour and begin the revolution.

yes, autocorrect, I definitely meant to say that this cake is very maoist

A weird but effective threat.

Panic is the best sauce.

11. Can’t do anything right

It’s just predicting the future at this point.

Meant to text my partner 'how long for you to run errands' but 'run' autocorrected to 'ruin' and I'm standing with autocorrect on this one.

Everything is on fire now.

My iPhone’s autocorrect just changed flu shot to fly shit, in case you wondered if Siri is an anti-vaxxer.

There’s still so much to do.

By all means, autocorrect. Let’s tell people what a busty day I had.

Autocorrect just changed “TikTok” to “No. You’re 40.” and then powered down my phone.

Nobody works out that much.

Dear autocorrect
Why on earth would I want to type “abs” instead of “and” every time.

While we’re here. I’m not trying to type “duck” either. #duckyouautocorrect

I need a thing I can pet, not park.

Look, autocorrect, as long as I live in New York, I will ALWAYS be typing "cat", not "car"

Maybe your phone has been overtaken by the spirit of The Joker and you just don’t know it yet.

Autocorrect changes Hahaha to HAHAHAHAHA because it thinks I'm a psycho.

Don’t know if autocorrect is a force for good in this crazy world or a force for evil. Maybe chaos.

One thing’s for sure – it’s given us no shortage of jokes.

Maybe that was the true intent of the software all along…

Is autocorrect worth having or not?

Tell us your opinion in the comments.