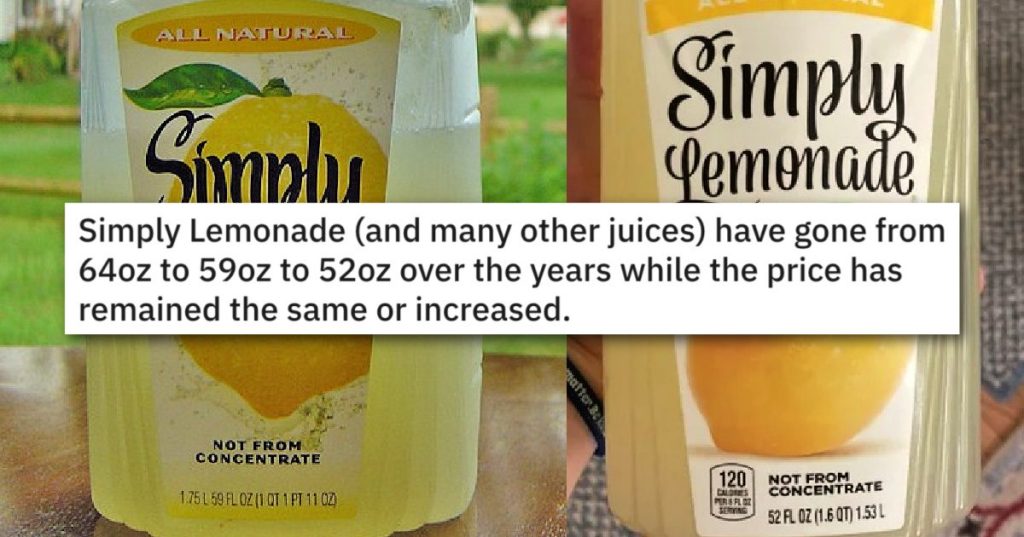 15 Images That Prove While Prices Go Up, The Size Of Our Products Goes Down

It can sometimes seem as if nothing is going our way these days. Prices are going up, people are divided, and it seems as if the hill to achieve meaningful change is way too high to ever crest.

If you’re feeling that way, well…this list isn’t going to make you feel any better.

Because these 15 pictures definitely prove that even though we’re paying more at the checkout, the products we’re buying aren’t following the same trend.

I wonder how many chips lost that translates to.

14. I guess they think families are getting smaller, too.

Heck, maybe they are.

They finally did it: Corn flakes Family Size, ~21% smaller. from shrinkflation

So I guess that’s something.

12. But the bottle has gotten taller.

Simply Lemonade (and many other juices) have gone from 64oz to 59oz to 52oz over the years while the price has remained the same or increased. from shrinkflation

I’m not sure how they quantify that.

14oz to 12oz from shrinkflation

10. I never would have checked my bar of soap.

It seems to last so long, still!

9. They’re too cheap to change the lids.

8. Maybe they do less harm to the environment.

That’s probably too much to ask for, though.

New bounty paper towel on the left, old bounty on the right. Both packs bought at Costco. Width is smaller & the towel itself is thinner. from shrinkflation

7. Are they calling both things a pint?

Because that doesn’t seem right.

6. They want you to believe it’s more concentrated now.

This is a true tragedy of the first world kind.

And decreases the flavor just a little bit.

The eight-year old recipe I’m using calls for "15 oz. can of stewed tomatoes". All the cans are now 14.5 oz. from shrinkflation

3. The new label is easier to read.

Bought a bottle of Febreze for the first time in a few years, still had the old bottle. New one is 37.5% smaller. from shrinkflation

I bet there are fewer spoiled cats out there.

1. They’ll probably try to convince us they’re easier to store.

For that price, I’d rather have the extra 4 bags.

Noticed this jewel when restocking my shelves… from shrinkflation

Now I’m just kind of mad and broke. You?

What do you think could be done about this? Anything? Let’s pretend like we can fix it in the comments!