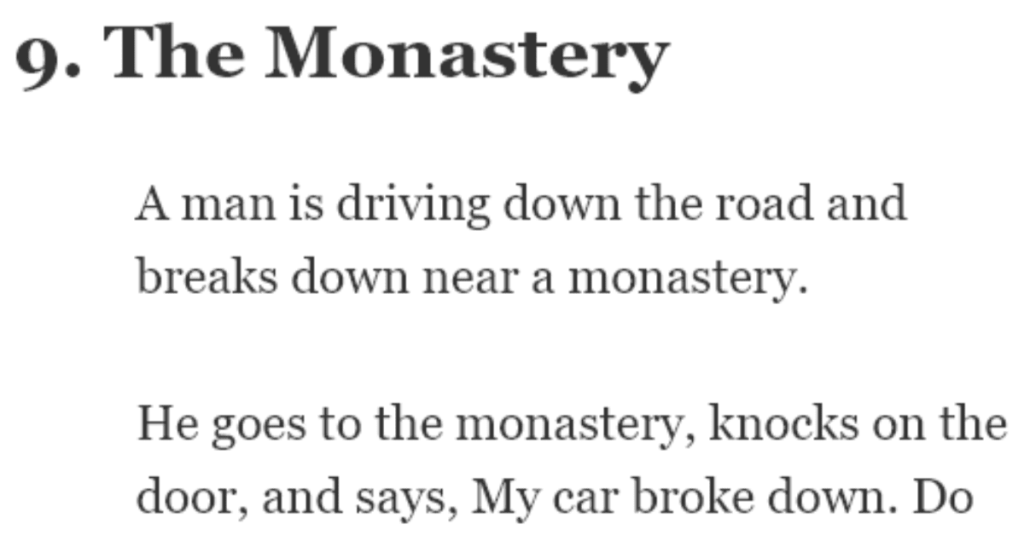 Guy walks into a doctor’s office with celery in his nose and carrots sticking out of his ears.

The guy says “Doctor, what’s wrong with me?”

And the doctor replies, “Well first of all, you’re not eating right.”

That’s my big go-to joke. Everybody’s got one, and it’s usually a groaner.

If someone asks you to tell them a joke, what’s your go to? from AskReddit

Will any of these from Reddit make you truly laugh? Let’s find out.

I went to the coffee shop the other day, and the lady behind the counter asked me what I wanted. I said “Give me your mildest roast”.

She looked at me for a moment and said “You have the most average ears”.

2. All in the family

A woman woke up from a coma to find out she had birthed her twins while unconscious. The nurse assured her the babies were fine and that her brother was taking good care of them.

The nurse further explained the brother had taken the liberty of naming them. The new mother asked for the names and the nurse said “Well, your baby girl is Denise.”

And the mother said “That’s not terrible, what about my boy?”

3. The challenge of faith

A catholic priest, a baptist preacher, and a rabbi are drinking at a bar. After a few rounds, they agree that converting people is easy; a real challenge of faith would be converting a bear. So they agree to each go out into the woods, find a bear, try to convert it, and report back with their results the next week.

The next week all three are back at the bar. The priest tells his story first, his face and arms covered in scratches. “Well, I went out into the woods, found me a bear, and started reading to him from the Good Book. Apparently he didn’t take kindly to that, and started batting me around. But with a few sprinkles of holy water he was as gentle as the Lamb.”

The preacher goes next, his arm in a cast. “Where I come from, we don’t believe a little sprinkle is enough to cleanse the soul. When my bear turned on me, I wrestled him down the hill to the river below, and baptized him. And lo and behold, he was as gentle as could be.”

The rabbi chuckles to himself as he sits there in a wheelchair and full body cast. “I guess I shouldn’t have started with the circumcision.”

A pirate walks into a bar. He’s got a hook hand, peg-leg eye patch and a parrot.

The bartender asks him how he lost his leg. The pirate replies “arrr, ’twas bitten off by a shark. I barely made it back with me life”.

The bartender says “well that’s terrible, how did you lose your hand”.

The pirate responds “lost it in a duel”.

The bartender takes a moment and asks “and the eye patch”.

The bartender is confused and says “How did you lose an eye from that?” and the pirate says ” ’twas me first day with the hook”.

I heard of a book where pavlov’s dog and schrodinger’s cat have a cross country adventure.

When i asked the librarian about it, she said “It rings a bell but ill have to check whether its there or not”

A penguin takes his car to the shop to get it checked out.

To kill some time, he walks across the street to get some ice cream.

He goes back to the shop and the mechanic said “Looks like you blew a seal.”

The penguin replied “No, that’s just a little ice cream.”

7. The most magical place on earth

Mickey and Minnie Mouse are in divorce court.

The judge motions to Mickey and says, “Mr. Mouse, just to be clear, you say you want to divorce your wife because you think she’s crazy.”

Mickey looks to the judge and replies, “I didn’t say she was crazy. I said she was f**king Goofy!”

A guy walks into a bar with his pet alligator. The bartender is very sketched out and asks the man to leave.

“If I can prove that this alligator is tame and won’t bite, may we stay?” the man asked.

The bartender agreed and gave the man a chance to prove himself. The man knelt in front of the gator — which held its mouth open baring its teeth — and he proceeded to dangle his privates in the wide open gap.

He felt as if he had proven himself, and was so assured that he shouted to all of the spectators at the bar “would anyone else like to try?!”

A drunk fellow at the end of the bar shouted back, “I would, but I don’t know if I can hold my mouth open for that long!”

A man is driving down the road and breaks down near a monastery.

He goes to the monastery, knocks on the door, and says, My car broke down. Do you think I could stay the night? The monks graciously accept him, feed him dinner, even fix his car.

As the man tries to fall asleep, he hears a very strange sound. The next morning, he asks the monks what the sound was, but they say, We can’t tell you. You’re not a monk. The man is disappointed but thanks them anyway and goes about his merry way.

Some years later, The same man breaks down in front of the same monastery. The monks again accept him, feed him, and again fix his car. That night, he hears the same strange noise that he had heard years earlier. The next morning, he asks what it is, but the monks reply, We can’t tell you. You’re not a monk.

The man says, All right, all right. I’m dying to know.

The monks reply, You must travel the earth and tell us how many blades of grass there are and the exact number of sand pebbles, when you find these numbers, you will become a monk. The man sets about his task. Some 54 years later, he returns and knocks on the door of the monastery.

The monks reply, Congratulations. You are now a monk. We shall now show you the way to the sound.

The monks lead the man to a wooden door where the head monk says, The sound is right behind that door. The man reaches for the knob, but the door is locked.

He says, Real funny. May I have the key? The monks give him the key, and he opens the door. Behind the wooden door is another door made of stone.

The man demands the key to the stone door. The monks give him the key, and he opens it, only to find a door made of ruby. He demands another key from the monks, who provide it.

Behind that door is another door, this one made of sapphire, And so it went until the man had gone through doors of emerald, silver, topaz, and amethyst.

Finally, the monks say, This is the last key to the last door.

The man is relieved to know that he has finally reached to the end .

He unlocks the door, turns the knob, and behind that door he is amazed to find the source of that strange sound.

But he can’t tell you what it is because you’re not a monk.

10. The rabbit and the bear

A Bear and a rabbit are taking a shit in the woods.

The bear turns to the rabbit and says: “Excuse me Mr Rabbit, do you have a problem with s**t sticking to your fur?”

The rabbit turns to the bear and says “No I do not Mr Bear”. So the bear wiped his a** with the rabbit.

What’s the difference between a dirty bus stop and a lobster with breast implants?

One is a crusty bus station and the other is a busty crustacean.

I saw a doctor the other day, and he told me “Raul, listen man, whatever you do, don’t eat anything fatty.”

And he said “No fatty. Don’t eat anything.”

2 guys are out hunting, one falls over and knocks himself out.

The other calls 911 and says “please help I think my friend is dead” the 911 operator says back “OK, first we have to make sure he’s dead” and hears to gunshots over the phone “now what?”

So, a guy with a much smaller man on his shoulder walks into a bar.

He takes a seat, and asks the bartender “Do you guys have a piano?”

“It’s right over there. Say, what’s the deal with the fella on your shoulder?”, the bartender responds.

“That genie outside your bar gave me a seven inch pianist.”

This is the first the bartender’s ever heard of this, so he quickly rushes outside the bar to see if what the man said was true.

Lo and behold, there’s a genie right next to the bar’s entrance.

“Wait, are you actually a genie?” The bartender asks, in disbelief.

“Wait, how many wishes do I have?”

“Well then for my first wish, I wish for a million bucks!”

“Your wish is granted. Look inside of your bar.”

The bartender goes back into his bar, only to find that it’s filled with ducks. Tons of ‘em.

Confused, the bartender makes his way to the man from earlier.

“I think your genie’s broken. I asked for a million bucks and I think he gave me a million ducks!”, he tells the man.

“I know! You think I wished for a seven inch pianist?”

A guy is interviewing for a job. He’s KILLING it and the interviewer is impressed!

However, the interviewer then turns to the man, bewildered, and says,

“I’m very impressed with you, but I must ask about this 4 yr gap in your employment”

The interviewee says, “oh that’s when I went to Yale”

The interviewer is more impressed, and offers a job on the spot!

The interviewee throws his hands up in celebration, and says,

Man, some of those are just infuriating.

Do you have a go-to joke?