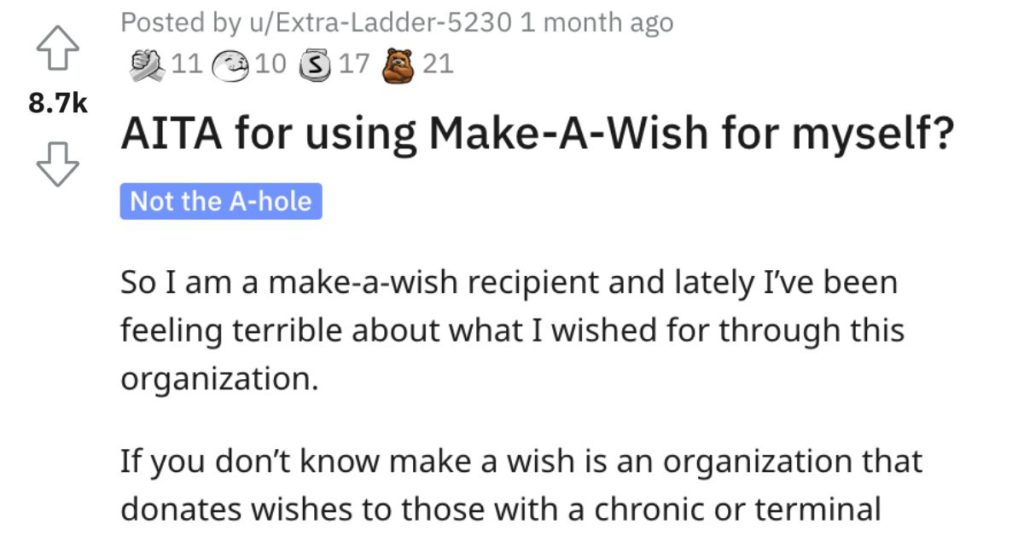 She Used the Make-a-Wish Foundation to Ask For Something for Herself Instead of a Family Vacation. Are They Wrong?

I could’ve sworn that the Make-A-Wish Foundation was supposed to be all about what the sick child wanted, but what do I know…?

I gotta say, I haven’t encountered a story quite like this one on Reddit’s “Am I the A**hole?” page, but there’s a first time for everything, right?

AITA for using Make-A-Wish for myself?

“So I am a make-a-wish recipient and lately I’ve been feeling terrible about what I wished for through this organization.

If you don’t know make a wish is an organization that donates wishes to those with a chronic or terminal illness. When I was younger I have always been asked by this organization to make a wish for anything whether it be trips or something I would like for myself personally.

However throughout the years I have refused them because I didn’t think I needed anything and also because my siblings kept asking me if they wanted to grant me a wish because I was gonna die soon even though it turns out that that was never the case.

So I turned 18 and since that time I have underwent 3 surgeries since graduating high school. I have also had to take medical leave from university since the surgery didn’t go well.

During that time, make a wish had asked me if I wanted to wish for something and that this was my last chance to do so and I told them I would consider it and let them know when I was ready.

When I was ready to make my wish I kept being pressured about wishing for a family trip even though I honestly am not interested in traveling anywhere. Because of COVID the traveling trips were canceled and felt as if there was an opening to ask if I could get tuition money for school but was told that they don’t really do those kinds of wishes.

At the end I finally decided on a shopping spree to get the tech that I know I would need to purchase for university down the road and also the ones I wanted.

My mom has always been there in the hospital for me and felt as though it was selfish of me to make a wish that didn’t benefit her or the family. And as a result decided to sell the computer (one of the gifts I got).

I was also told by my brother that it was selfish of me to get this for myself and should have spent it equally on the whole family as they all suffer when I’m sick.

I know it’s true but I am a student and wanted to have the ability to work from the comfort of my home and have an office setup because In high school I always had to complete assignments at school or share the laptop amongst my siblings.

I’m wondering am I the a**hole for wishing for myself.”

Now let’s see what folks on Reddit had to say about this.

This reader said that this person doesn’t need to feel guilty at all. 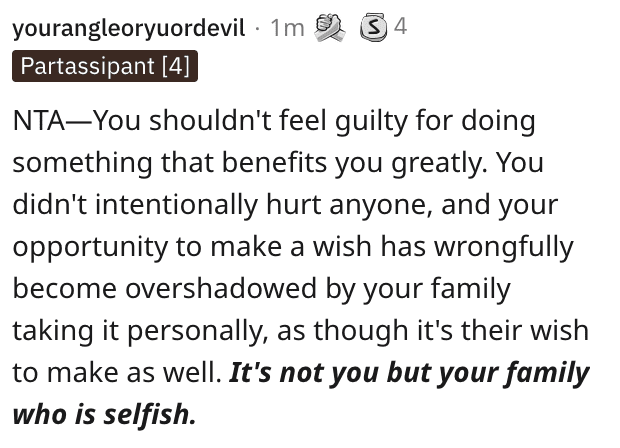 Another Reddit user said even if the wish they made was selfish, that’s kind of the point. 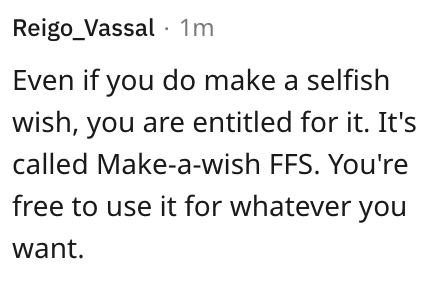 This person said that they should repay their aunt someday for her support. 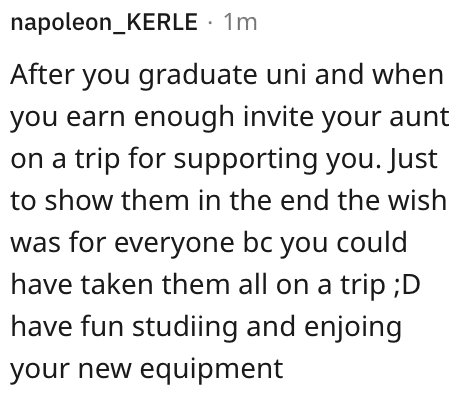 And lastly, another reader said that the parents are definitely the a**holes in this situation. 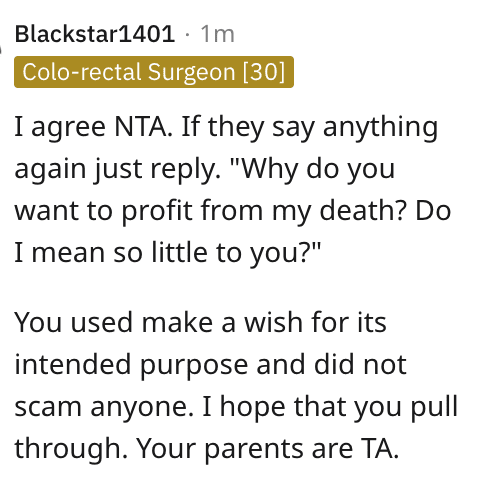