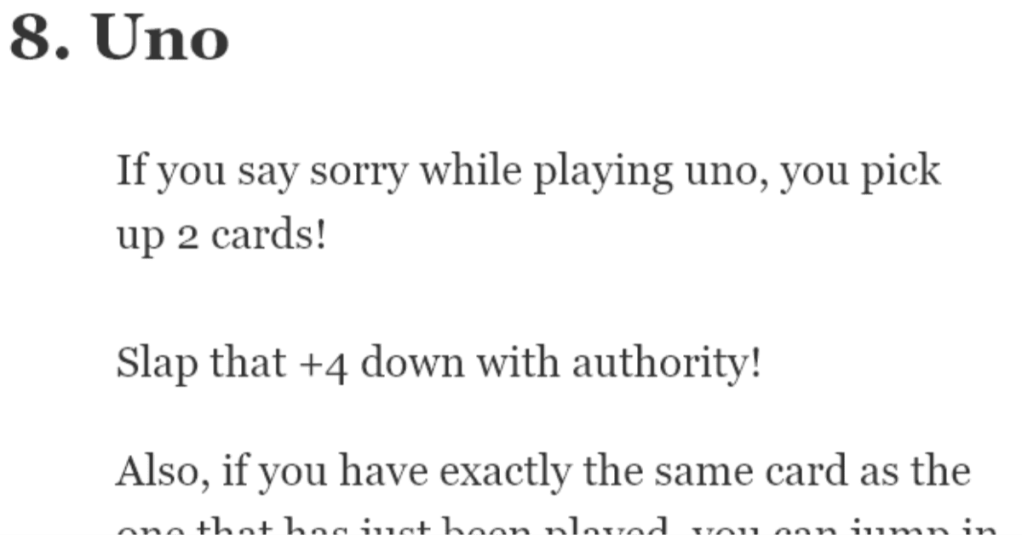 15 New Rules You Can Try Adding at Game Night

Do you like your game night but you’re looking to spice it up a little?

Look no further than the delightful chaos of House Rules.

What is an extra rule your family added to a popular board or card game? from AskReddit

Here are a few suggestions on Reddit for just how you can keep things interesting.

Rule in the actual game was you had to roll exact to get into a place, but it ended up with too many dice rolls doing absolutely nothing. One player ended up just stuck in one place for literally half an hour, before then getting somewhere else and then being stuck for another half an hour. They did virtually nothing all game. (Really, that rule means the game should be called Waddingtons Stop.)

To combat this, we came up with a house rule that you have a “3 strikes and in” – if you fail to get the right number 3 times, you automatically get to your destination, to stop the game being dull.

First the troops were relocated (only able to move one country).

Then attacks rolled (once again, you could only attack a neighboring country and if you won, you could occupy it. But you could not keep pressing the attack until the next turn.

If 2 or more countries were attacking each other, they all rolled the max number of dice.

Ties were then rerolled.

You can play 3 player (cutthroat) Taboo. The rules don’t really change but the scoring does. There’s a Ref (watching for taboo words), Guesser (can’t see the card) & Talker (can see the card)

The guesser and talker will get 1 point each for each successful guessed word. Taboo words are scored 1 point to the Ref.

At the end of the round, roles rotate like normal (clockwise). After everyone has two turns “talking”, rotate the the other way (counterclockwise). This lets everyone get a turn guessing and talking with each person.

I prefer this way because you don’t get stuck on a winning, or losing team. Everyone plays with everyone. and there’s never a 4th person out.

In high school, my group of friends loved to play Clue.

Unfortunately we found the game got a bit stale after a few nights of playing.

So, we actually designed our own board “extension”, containing additional rooms, and created new cards for extra weapons and characters so it was more challenging to determine who the killer was.

“The Mugging Rule” in Monopoly.

If I land on a space that you are currently occupying, I can choose to mug you.

We take turns rolling the dice, if I roll higher, I steal $100, if you roll higher I go to jail.

In the Game of Life we would put the white car on top of the middle building of the three white buildings together.

If you say sorry while playing uno, you pick up 2 cards!

Slap that +4 down with authority!

Also, if you have exactly the same card as the one that has just been played, you can jump in and play your duplicate regardless of if it’s your turn or not

In Uno we draw cards until we can throw one down. No limits.

We have had to buy a second deck because of this.

We also possibly lost friendships over it too.

All moves must end with the attacker saying “Thees konkludes my territorial demands!” as if you were a warlord facing a cowering princeling.

If the color red is getting played in the card game “UNO” nobody is allowed to talk.

You have to pick up one card for every word you say.

After a person has laid down, if their set has any wilds, other members are allowed to take the wilds as long as they provide the card the wild was representing.

You’re only allowed to do this if you can lay down in the same turn.

My girlfriend’s family award £400 if you land on GO in Monopoly.

It’s still £200 for just passing, but you get double if you land on it.

My grandma and I would call it “substitution”.

Basically if the person before you played “bat” and you need a B to get the word you want, then you can change out the B in bat with the C in your hand. As long as it makes a word on the board in any direction then you are able change letters around.

We’ve been able to work the board and get bingos multiple times in a row, ads a lot of strategy to the game.

Rule for my kids with all board games.

Winner cleans up, loser or lowest score picks next game, tantrums/rage quitting gets you banned from the next game session all together.

I think most of those are great ideas!

Do you have any special house rules?