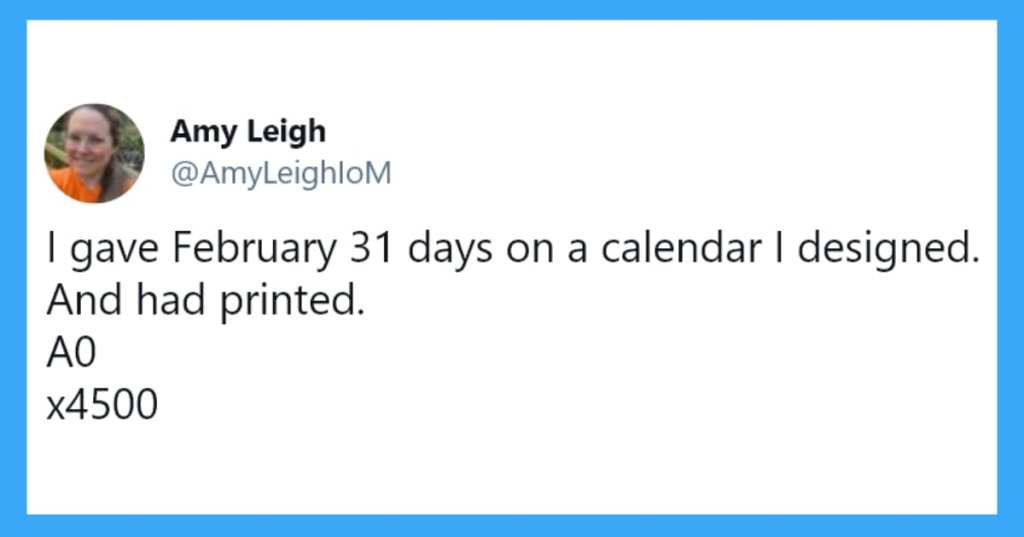 15 of the Biggest Job Screw-Ups Ever

I worked at Blockbuster in the years just before they were overtaken by Netflix and went out of business – I was 17/18 at the time, I think.

During one shift when I was the only person in the store, a man came in and in broken English asked something about making DVDs.

It took me a minute to understand what he was getting at, but I eventually realized that he had some home videos he wanted to convert to digital, and he was under the impression that maybe this video store did that sort of thing. Blockbuster didn’t, of course, but it just so happened that I did personally. So I told him to leave them with me and come back in a week or so.

Coming into work another day, my manager looked me in the eye and said “Ben, I was sure I had to fire you.”

Turns out that when a guy walks into the store and tells your manager you “said you’d make him movie copies,” it looks a lot like you’re participating in a piracy ring.

what’s the worst mistake you’ve ever made at work? after a long & stressful day speedwriting summaries i mixed up the names of (BBC director general) Tony Hall & (disgraced paedophile) Stuart Hall in a report i sent to… BBC DG Tony Hall, all the BBC top brass, the BBC trustees,

One of my many, many temporary jobs was looking after the pool at a holiday park. One weekend I had other plans and so decided to just put extra chlorine in, thinking it would be OK for the weekend. Returned to work to find a green pool and angry parents of kids with white hair.

opening night of Sex and the City 2 film, packed screen we encouraged all the audience to dress up for and they were all drunk as fuck. i was hungover in the projection booth and laced up The Tooth Fairy starring the Rock instead. got about 20 minutes into the film, nearly a riot

Who cleans the cleaner?

Had work experience in a vet surgery as a gormless teen. They handed me an bottle of brassy liquid and said “take this to that sink and clean it out”.

I squirted almost the full bottle right down the drain before I realised it was disinfectant and it was the sink I was to clean.

11. You have the right to remain silent

To be fair, that’s definitely something you should have been briefed on.

Saturday shop job working on the tills I found a little button with a key under the counter. Spent an idle 10 minutes pressing the button and turning the key, over and over, until 3 police cars screeched up outside. Not my fault no one had ever told me about the silent alarm.

most embarrassing was making up an entire statute in front of a full court while trying to defend my right to be present to report on a hearing. the judge was like “nice try but that law does not exist, goodbye”. (sorry @DBanksy i should have listened more in your classes)

Good luck talking your way out of that one.

I was hurrying to leave at the end of the day. I put on my jacket in a hurry. Pushed my hand through the sleeve and accidentally punched my boss’s mother in the face. She was visiting the office. That was a bad day.

For the prices restaurants charge that seems more than fair.

as a teenage waitress, whenever people ordered a glass of wine, i filled the glasses almost to the brim. never occurred to me that you’re very much not meant to fill them completely. people probably had more than a third of a bottle. no complaints…!

Magazine I was working for put ‘The Wolf of Wolf Street’ as a cover hit, which none of us caught on proof. Got email from hilarious subscriber asking about the sequel ‘The Wall of Wall Street’.

As a rookie English teacher in Spain I felt I had to explain in Spanish what a weasel was, and not knowing the word for it I said “it’s a long thing that goes into rabbit holes”. I was then unaware that the Spanish word for rabbit doubles as a vulgarism for female genitalia.

What’s all this, then?

When an Admin at the (then) National Assembly for Wales, I accidentally forwarded a video called ‘Bean Bag’ (featuring a guy with giganticism of the scrotum/testacles) to the Commissioner for European Affairs.

Those before me in the email chain were (understandably) livid.

This is more math than I wanted to do today.

Inadvertently changed every single button on the till to a pint of bitter. Want to pay for your stay in the hotel? Hang on whilst I woke out how many pints that is. Thankfully the till repair man was only an hour away ?

And with the cost of ink? Woof.

That kid will never forget it.

When I was at Nintendo magazine, a young reader challenged me to an online Pokémon battle. I shouted a lot of incredibly rude words at my DS as she wiped the floor with me. At the end a tiny voice came out of the console saying “well done”. One of the new features was voice chat.

This is exactly the thing you’re not supposed to do in a crowded theatre.

I was struggling to solve a band monitor problem & came up with an ingenious rigging solution which involved taking out a couple of ceiling panels. The dust released by that action went straight into the smoke detector and set it off again. Whole building evacuation again.

My mistakes don’t seem quite so big now.

What was your biggest work screw up?