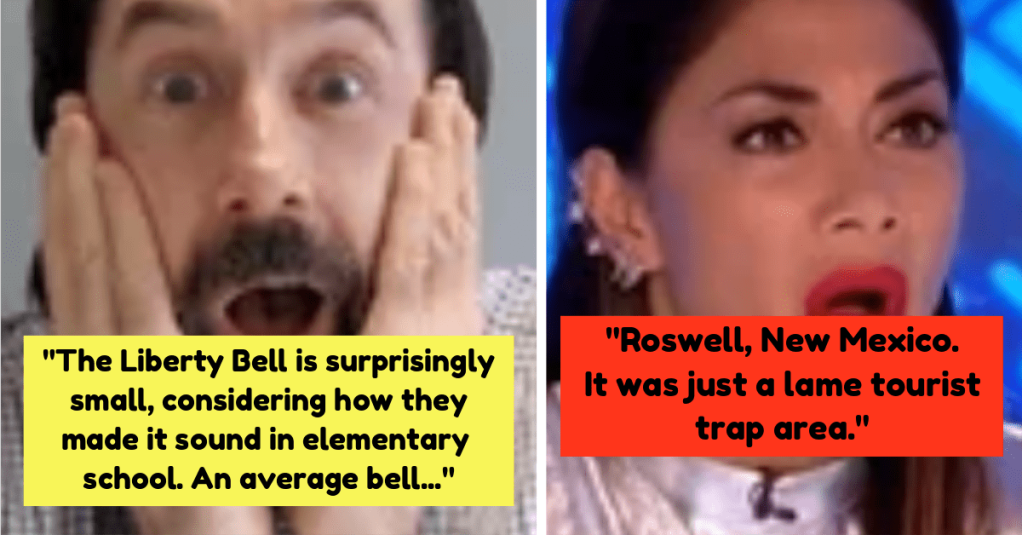 15 People Admit the Tourist Destinations That Disappointed Them

Have you ever been totally let down by a popular tourist destination?

I’m wracking my brain and I can’t seem to think of anything off the top of my head…but I’ve heard plenty of people complain about places they were excited to see and felt were less than thrilling.

Let’s see what tourist destinations AskReddit users were let down by.

“Plymouth Rock was the dumbest thing I ever got taken on a school trip to see.

I live in the area, and went to downtown Plymouth a few years ago to drink with friends. Parking in the summer is a nightmare, so I parked near this weird colonnade thing. I wondered what it was and went to check it out…and it was Plymouth Rock. It’s the saddest little rock, glued together and surrounded by trash and half in the tide. If I’m ever downtown in the summer I genuinely watching tourists visit and be disappointed.

The worst part is that there is no real “Plymouth Rock.” It was a legend and eventually locals decided to pick a rock near the original Plymouth colony settlement to play the part. And THAT rock is the one they picked!”

“The Skybridge at the Grand Canyon.

It’s a 2 hour, one way, trip where it costs $60 a person to enter the reservation, then another $60 to enter the park, than another $50 for the Skybridge.”

“I went to a really sad aquarium in Seaside, Oregon. I was holding back tears due to the poor condition of all the creatures. Every tank was overcrowded, and everything looked absolutely miserable.

There was an octopus in an open tank, barely any water. It was terrified, and the only protection it had was a sign telling people not to touch it. For comparison, I grew up in California and used to visit the Monterey Bay aquarium when I was younger, which is an amazing place where marine life is very well cared for.”

“The Hollywood Walk of Fame.

Bunch of scammers, homeless people, druggies, and random people trying to sell you their mixtapes and other random s**t in the streets. And these mixtape/CD people literally shove the CD in your face as you’re walking. It’s so annoying.

Oh and it’s crowded as hell, so you’re getting jostled and yelled at for getting into other people’s pictures. And it’s impossible for you to take your own pictures without getting bumped around. Or pickpocketed (happened to my cousin when we were visiting).”

Not because they weren’t amazing, just because of the sheer volume of tourists clambering up them like ants. That’s the thing with these attractions.

You always imagine them to be so stunning because they’re pictured without crowds, but when you get there and it’s crammed with thousands of people, it does feel like you imagine.”

It was just a lame tourist trap area.”

It’s basically just a souvenir store. The parts of the store featured in the TV show are all just sets, and they aren’t accessible to the public.

You walk into a dim room that feels like the storage room in the back, cement floor. They have a few jewelcase counters with rolexes, and a few collectable coins. The rest of the store is Pawn Stars shirts and souvenirs.”

Now, The Louvre is amazing. However, seeing the Mona Lisa is disappointing. You go to a relatively narrow hallway, and there is a pane of glass 15 feet in front of the painting.

I understand that it needs to be protected and preserved.”

“The 4 Corners Monument. It is the intersection of Utah, New Mexico, Colorado and Arizona.

It’s just a sidewalk and a gift shop. I guess I don’t know what I was expecting, but it’s about 5 seconds of fun.”

“The Liberty Bell is surprisingly small, considering how they made it sound in elementary school.

I waited in line for 45 mins to see an….average bell? With a small crack…?”

“There is some fun stuff to do in Pigeon Forge and Gatlinburg Tennessee, so that those towns aren’t a total wash.

But 98% of the activities there are outright tourist traps that distract from the beauty and absolute splendor of the Smoky Mountain National Park.

If you’re in East Tennessee and are spending 80% of your time inside those tourist traps and not in the park itself…. you’re doing it wrong.”