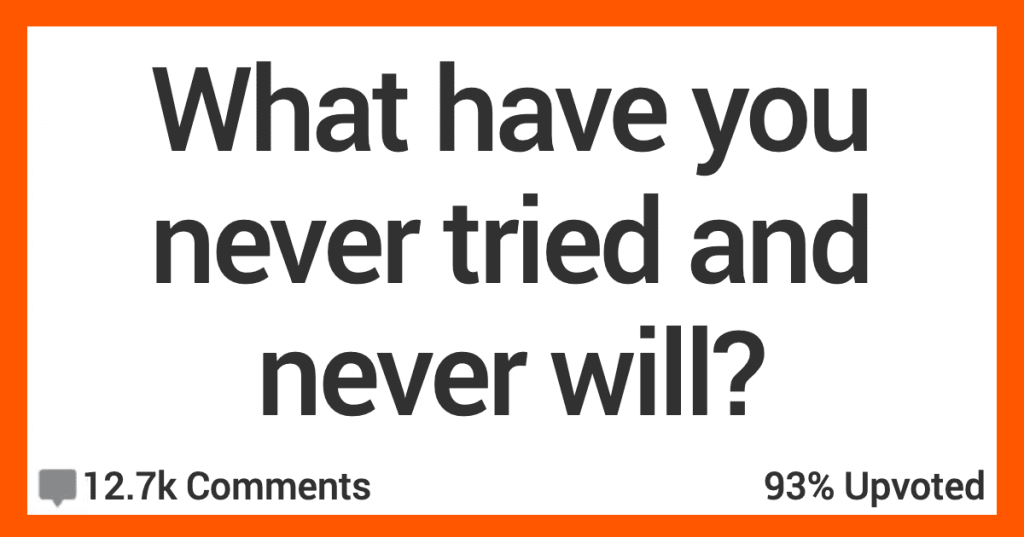 There’s no way in HELL I’d ever try any psychedelic drugs.

What have you never tried and never will?

“That cave exploration hobby where people squeeze through tight spaces.

It’s all fun and games until 3 years later when you realize you are either going to end up d**d or suckin’ off dudes behind a 7/11 for drug money because you cant sustain a job or any other normal part of life for not being able to get out of bed without chasing the dragon.”

I assume this is a saying for good reason.”

I’ve watched documentaries on that.

Why anyone would do it really astounds me.”

Grew up with a s**ker. Everything smells so gross.

I’ve never even wanted to try it and I have no idea why anyone ever starts to smoke…I understand why they have difficulty quitting, but why did you start?”

I came into this world because of a broken rubber and I refuse to leave it for the same reason.”

98% of all d**ths I’ve had were from scuba divers. It’s a horrible painful d**th and it doesn’t matter how much of an expert you think you are.

No shade to anyone who engages in them.

There’s this guy I know that goes on a bender twice a year and I swear his life just goes to s**t and I’m there telling him he’s too old for that stuff, plus we’re in Australia so he isn’t getting a good price for it.

Just drink beer and smoke weed, Jesus. And he’s at me for the next five days about how he “f**ked up” and he can’t afford to live.

Not mentally stable enough for that s**t.”

I would feel so sick if i did something like that.”

I live thousands of kilometres away from snow so there is a pretty strong chance that it won’t happen.”

I just think that I would be one of those people that get sucked into it and enjoys it to the extent that it interferes with my productivity.

To each their own in their own home and being safe, but I don’t think it would be good for me personally.”