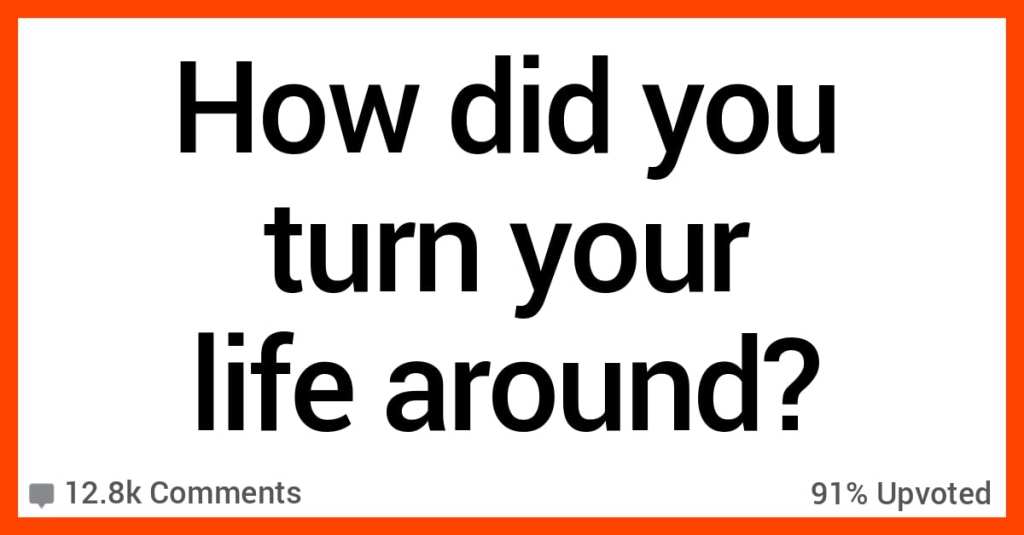 15 People Discuss How They Turned Their Lives Around

I love hearing a great story about someone who was down on their luck, saw little to no hope in the future, and then turned their life around for the better.

It gets me every time!

Because there are few things as inspiring as a feel-good, comeback story, right?

AskReddit users shared their personal stories about turning their lives around.

“I grew up in South Florida during the beginning of the opioid craziness.

From 2006-2011 things got pretty bad. I’m 2011 I sold my last possession, my car for $800 packed 2 suitcases and bought a bus ticket to Denver. Never been to Denver, didn’t know anyone there but weed was starting to be legal and I didn’t want to miss out.

I detoxed on the bus going from Florida to Colorado. Do not recommend. I got lucky and ended up sitting next to a guy that was a grower and needed help in his garden. I didn’t know it at the time but on the Greyhound he said I had an 8 hour job interview.

Got to Denver and he really helped me get established. Within 2 months I was sleeping on his couch and learning how to grow. Haven’t touched a pain killer since I got on that bus almost 9 and a half years ago and now I’m married, home owner, decent car, and working my dream job in the cannabis industry.

It’s not for everyone, but I literally went from homeless sticking needles in my arm to living a life better than I could have ever imagined.”

2. On the road to happiness.

I lost weight, shaved head, got tattoos, travel more, complain less. Everything I do is for myself. I have a long way to go.

If it’s me trying to impress someone it never sticks. You have to want to do it yourself.”

“Left an abusive home, went to university at 18, got lost in a black hole of depression, drugs and debt for three years, dropped out. Literally can’t even remember half of it.

Broke, desperate, I called up my estranged dad and he helped me get back on my feet, gave me a loan and kept me alive while I battled daily suicidal ideation and worked part time. Eventually graduated.

Now I’m 30 and my fiancé is supporting me while I go through therapy. I even have some money in savings and we’re talking about buying a home.”

“Forced myself to become a couch-surfing loser in order to reset myself. I was in my 20’s with no job, and no school just bumming at my mom’s place and drinking away any cash I could get my hands on while playing video games 24/7.

Mom loves me unconditionally, which is good, but it basically enabled me because she would never throw me out. I realized I was a f*cking loser and kicked myself out to become “homeless” (but not really), and bummed at my buddies’ places until I could get a job and a place to live.

Now I not only have a well-paying job and a nice (enough) place, but a wife I love and 2 cats and I haven’t hit 30 yet. I just needed to feel the hunger to realize I wanted more.”

What I mean by that is that by accepting that This life is mine and I’m the only one that can turn it around. Nobody else . I quit drinking and smoking and all other bad habits And I started training and counting calories to lose weight .

2 years later I’m healthier than ever I’m surrounded by people who I love and love me , I got rid of all toxic people in my life ( including my family ) and I’m about to get married and start my own business .”

“Was always chubby while growing up. Had been yoyo dieting for almost a decade. It eventually got to the point where the dieting wasn’t effective, i couldn’t lose the weight and wasn’t even eating much.

I decided enough was enough and I was going to beat that f*cking eating addiction.

I remember walking into the kitchen being fed up with the scale, the food, my body. I thought to myself, this is absurd, im not eating much yet I still can’t lose. Im done with this sh*t. I stubborned up.

Cut the junk food, the snacks, and the irregular eating. Within 2 weeks my body caught up. It’s been 2 years since and I am proud to say that I’m actually in love with the way I look. And I dont even look perfect. But I’m content. Am no longer addicted to food and do eat intuitively.

Its not just the food addiction though. As soon as i got that under control, every other aspect of my life has improved significantly. I just feel happier overall…”

“Lived in Detroit. Skies are grey. Got laid off because management made an absolute mess out of the merger. Next door neighbor got murdered.

Decided the city will be the death of me and my happiness, too. Sold the house. Bought a van. Moved to L.A.. Went to school. Now I am doing some of the coolest sh*t imaginable. A number of publications.

Trips to the jungle. Exploring uncharted caves. Meeting celebs. Jumping out of airplanes. Presenting at academic conferences. Now trying to get into a Ph.D. program in archaeology.

That’s it in a nutshell.”

“I realized that I needed control of my life…. I was on a bad path to life in jail, and was listening to a bad crowed…. Jail or death were the paths infront of me. One day wile cleaning dishes it dawned on me that I had more worth. I could do better then that.

I now run tow truck and LOVE it. I get to help people and make smiles happen on so many faces it’s not even funny.

I give them a little knowledge along the way cas I know a thing or two. But tell them to take it with a grain of salt as I’m not a mechanic but it’s a start to what may save them money.”

“I was a high school dropout in a dead end job earning $30k per year.

Found out my girlfriend was pregnant when we were only 20 and had visions of being a deadbeat broke dad who couldn’t provide for a kid I brought in to the world.

So I did a bridging course and went to university at 21 just as my daughter was born. Married my GF at 24 and have since had 2 more kids.

Comfortably earn $200k a year and have a great career and feel like everything just fell in to place.”

“After getting arrested and looking forward to nothing but getting f*cked up on something, I found myself sitting under a bridge with a group of friends trying to scrape together money to buy drugs.

A few of them were in their thirties and I was a teenager at the time. After coming down I made up my mind that I didn’t want to end up like them. I joined the military, met the love of my life and settled down in a different part of the country.

I have a great career, a family, and am still happily married. Finding a way to leave was the best decision I ever made. “Under the Bridge” by RHCP is still to this day a very personal song that strongly resonates with me.”

“My girlfriend at the time dumped me to get back with her ex and i remember asker her why and one of the things she said was she saw how hard i struggled with school and didn’t think she could be with someone who wasn’t going to be successful.

After a couple of months of being depressed i ended up internalizing what she said and dropped out of school to focus on culinary (i was already working in kitchens but going to school for business) ended up doing really well and now i run a pretty succesful meal prepping business and do private dinners on the side.”

“After college I got my first real job (IT). I met a girl at work. She had a baby but the daddy wasn’t in the picture. We got married, bought a house in the suburbs and a couple cars…cause that is what I thought you were supposed to do.

Two years later, we were both miserable and she found comfort in the arms of another man. I was at a total loss. My marriage failed, my contract was running out at work and I was super depressed.

The turning point was when my father asked me “who do you know who lives the furthest away that you could go visit?” I told him I had two close friends living in Los Angeles and he said “I’m buying you a plane ticket.”

That simple act changed everything. I went to LA and had a blast with my friends who convinced me to move out and live with them. I flew back home, filed for divorce, sold the house and the cars and packed up my sh*t and left.

That was 20 years ago. Since then I have remarried to an amazing woman. Have two incredible kids. Lived in LA, NYC and now Denver. I have traveled extensively, partied with rock stars, laughed so hard it literally hurt.

I can’t even imagine what live would have been like if I stayed with my first wife, if she hadn’t cheated, if I had let her convince me to stick around and be her baby daddy despite running off with another dude.

I saw her once many years later at a wedding. She said she was sorry for what she had done. I said don’t be and thanked her for it.”

“Stopped doing what other people said I should do and started doing the things I thought I should do.”

The benefits of those three are so noticeable. You feel more energized and motivated.”

15. Excited for the future.

“Bad decisions got me kicked out at 13.

I think it was $300/mth and I had to do yard work and repairs. Did that for years until I left to go to college. Struggled in college because I was a full-time student while working 2 full time jobs. Met my wife. Got my degree. Tried to reconnect with my parents. It’s tough.

Got married. And then struggled to find lucrative work for a year. Things have been improving exponentially since.

Work like crazy, save like mad, invest aggressively. Bought our first house for cash in 2017, had our first baby in 2019, and hit millionaire status in August 2020.

Excited for what your future will bring!!”

In the comments, tell us how you turned your life around.