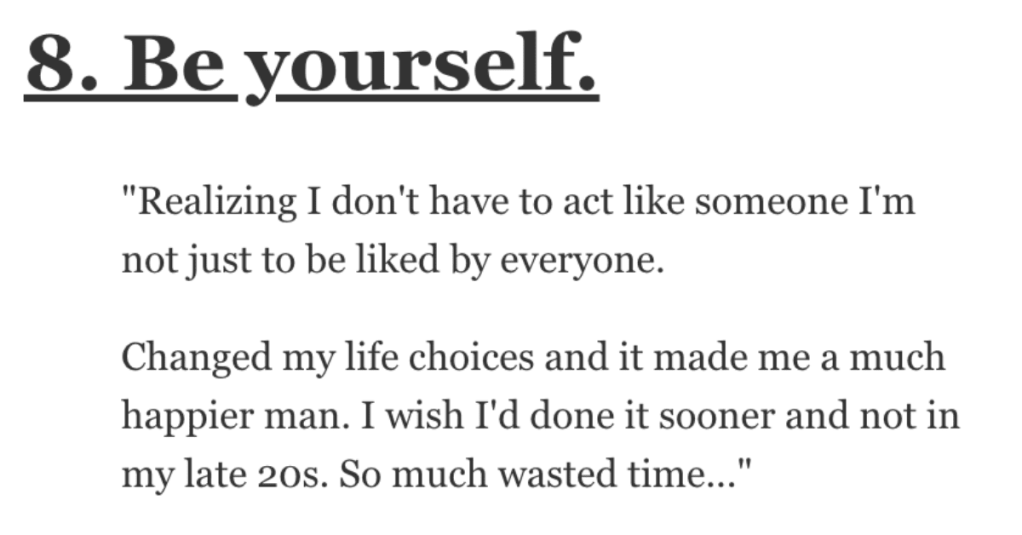 People Share What They Did to Turn Their Lives Around

I’m always impressed when people do a complete 180 and turn their lives around for the better.

It’s inspiring and it makes me realize that when things are tough and don’t look too promising, that things can and will get better.

Are you ready to read some inspiring stories about folks who turned their lives around?

“Stopped caring about things I can’t control and put all my energy into the things I can.

It sounds hard, but there’s actually a lot you can control and that doesn’t leave much room for the other sh*t.”

“When I was a teenager I was homeless. A lot of places wouldn’t hire me because I had no experience or interview clothes. I went to the board of education and begged the HR lady to give me a chance at any job. I told her I’d scrub the school with a toothbrush if they paid me.

They made me a general sub for clerical. I took a call for one of the “bad neighborhood” schools that some others turned down. Walked across town to get there every day do I had to start walking at 4:30 am to be on time. I wore dress clothes from a church mission that were way too big but I did my best.

After four months they gave me a long-term position. Then a permanent one with benefits. I saved up enough for an apartment (finding a landlord okay with renting to an 18 year old homeless girl was hard) and started college.

I haven’t been homeless a day since in the last 15 years. I even have a house now.”

“Decided it’s ok to put yourself first no matter what. I don’t mean that go ahead and cheat and lie for your benefits.

For example, I was seeing this toxic person for some time and I was the one always compromising and making efforts. When things finally ended, I chose to cut off all contact from that person while they wanted to remain in touch (for support or validation).

I felt bad and selfish while doing it but starting to feel better about myself now that that person is out of my life.

You need to be selfish if the other person is being selfish too.”

“I’m a month free of smoking weed daily for 8 years, I’m struggling still thinking i need it to be happy.

Its been a rough month with sleep but i know after i get past these few months i will proceed to better my life.”

“Moving out of my parents house.

I was living with my parents (which is very common thing in India) until end of my med school. I’ve been in my comfort zone all my life and had everything I need.

That led to depression and I wanted to live by myself and to get out of my bubble. Now I can’t say I figured it all but I definitely feel better.”

“I heavily reduced sugar when I was 21 and started resistance training .

2 years later and I am feeling the best I have ever felt, have so much energy and self confidence because I actually like the way I look now.

Clothes fit so much better as well.”

“Realizing I don’t have to act like someone I’m not just to be liked by everyone.

Changed my life choices and it made me a much happier man. I wish I’d done it sooner and not in my late 20s. So much wasted time…”

“Went to the gym

It helped me break out of OCD induced psychosis and brought me back to reality and have been going everyday since.

Had to replace it with exercising in the park during the peak of COVID though.”

Slowly realized that I have to think about myself too. Started going to gym, setting boundaries, eating foods I like and every day I tried to do one thing that made me happy.

And I finally got the courage to go to school and study something I actually like.”

“Realized my quest to find love wouldn’t fix anything wrong with me.

Stopped manipulating and using men to try to fill the void in my soul. Treated men like people instead of tools.

Actually fell in love and am married to the most wonderful person I’ve ever met.”

One day, I had an epiphany and realized that it wasn’t want I wanted, and that I’ve seen people go down similar paths. Actively sought help, changed friend groups, stayed in, got clean and am now doing okay.

Can’t say I’m doing great, but my future is looking better every day, even if it’s only slightly. The addiction is still affecting me, even after all this time, it’s caused insomnia and depression, along with anxiety. Things I didn’t have before doing coke/meth.”

“After being laid off from my last factory job, I suddenly found myself on the streets of Toronto in the early 1990’s with a grade 9 education, no money, no friends, no job references, and not really any family.

So what did I do? Found an unbelievably dirty crappy crawl-space basement apartment. Applied for Welfare. Stopped, drinking and smoking, and anything else unhealthy. Got a gym membership and went 4 hours a day. Jogged 5 miles every morning (weather permitting). Enrolled in an adult high school.

Ignored everyone and everything that would be a distraction. Got my High School diploma with honors in 2 years. Applied for university. Got in. Moved to a different city and spent 4 years getting my BA Hon in Philosophy (because I like to think and solve problems).

Applied to a graduate program, and spent the next 10 years getting my MA and my PhD. Then spent the next several years as a professor making good money and having lots of fun. Won’t say how things are going now because I got cursed with poor health etc., and so am no longer working.

I’ll just say that I am happy now and know that I would have ended up either dead or in jail if I hadn’t done what I did all those years ago. Sooner or later everyone has got to take their life seriously.”

“I tot injured in a car accident (rear ended). Lost my business and my wife of 19 years eventually left for another man, leaving behind a 17 year old daughter and 2 year old son.

Two days after she left I took my real estate license test. I PASSED! I had planned to surprise her but had hid that I was studying in case I failed. Either way it wasn’t enough and I ended up taking a job at Amazon.

I worked a graveyard shift while my daughter stayed home with my son. I also did open houses on the weekend in hopes someone would walk in unrepresented…

It still wasn’t enough so I signed up to drive Uber and lift. I had been able to pick up a decent vehicle from a family member for cheap and I was in business. I switched my graveyard shift to a day shift and started driving through the nights.

The money was alright but I realized I could make a little more if I switched from Amazon to another large company in the area, so I did. I did that for about a year

Things we’re ok, I was making good money and then Coldwell Banker fired me. I didn’t think Coldwell fired anyone as long as they were paying their dues. I had never sold a house so all it meant was I needed to switch to another broker. Turns out that was a blessing in disguise.

A friend called on my way to sign with Keller Williams and convinced me to sign with a temp agency. I was skeptical but what did I have to lose? The first and second day I was placed with Toll Brothers. It was alright and I could see myself doing that. On the third day I was sent to a local developer and my world was changed.

The broker of record and the local developer took me under their wing. After a few months they hired me away from my temp broker, gave me a salary and commissions and provided me with an opportunity to change my kids lives forever. I was able to go from working 4 jobs to just one and I have learned more about myself than I could have ever imagined possible.

It’s been three and a half long years but I wouldn’t change a thing if I could.”

Have you ever made big decisions and turned your life around?

If so, please talk to us in the comments. We look forward to it!