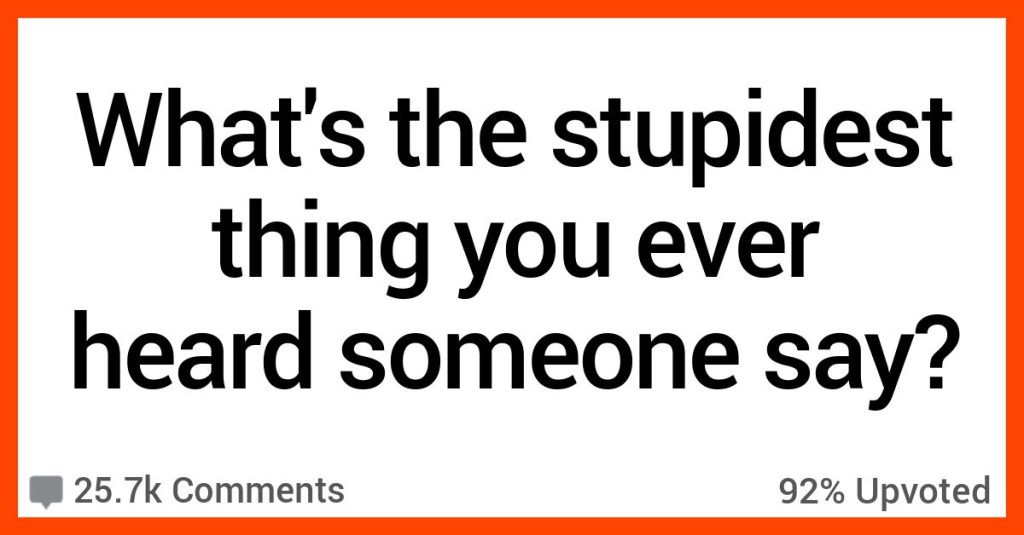 I’m not trying to sound like a jerk, but I think we can all agree that the more time you spend around people, the more you realize how dumb most human beings are.

Are you folks ready to get DUMB?

Folks on AskReddit talked about the dumbest things they’ve ever heard people say.

Let’s take a look, shall we?

“My roommate in college was the queen of face palms. She had a Brita when we moved in together.

A year or so later I was filling it up and casually told her “these are cool but I don’t want to have to pay for the filters.” Her response was “it’s not that expensive I still have the one it came with” she then walked up and held the reset button. “See, it’s reset now!”

She legitimately thought holding the button “reset” the filter.”

“My bother in law plastered baby oil all over his body and sat out in the sun for 2hrs. I told him he was going to get skin cancer.

His response “I don’t believe in skin cancer”. This is the guy who refuses to have a microwave in his house because “they are bad for you”.”

“After a work accident a co worker asked me, with a very serious face, if my finger would grow back .”

“I worked at a bagel shop and I had a customer come in with a complaint one day after buying some nestle chocolate milk from us. So here is how the story goes:

We had a guy come in and accuse us of selling and charging him for 2 bottles worth of chocolate milk inside of one bottle when he only wanted “one serving”. I guess he thought it was a super large or something? (We only have one size, and it isn’t that big) His reasoning for thinking that?

I know it sounds unbelievable, but it really is true. People this stupid exist in our world as members of society.”

“”Gold isn’t a metal because it isn’t magnetic.”

While working on an aluminum engine that he fully accepted as metal.”

“You won’t see any planes because it’s raining.

Tourist again said, but where is he buried? He just wasn’t understanding.”

“My uncle once said plastic isn’t bad for the environment because “it’s not like it’s not of the earth.

Everything in it came from here” I responded with “same with nukes” and he changed the subject.”

In sophomore year of high school I heard this.”

I had a manager tell me I needed to “work harder” to get over my hearing loss, there was genuinely no concept of hearing loss being permanent in some cases and no amount of working harder would get rid of it.”

“A woman I know adopted a baby from an Eastern European country.

Someone who worked in our city’s education system said “But when she grows up, how will you understand what she’s saying?””

In high school, I was talking with a group of people in my history class about where we were from. When I mentioned I was born and raised in NM, one of the girls (She was from Cali I believe) got really excited and asked if she could see my green card.

She had never seen one before, but she was positive that people in this state are given a birth certificate along with a green card. Because of the Mexico part.

I had to explain that we didn’t get green cards, because NEW Mexico is a state and not part of Mexico.”

““Anthropology? Isn’t that that religion invented by Sir Isaac Newton?”.

The first quote in a notebook I have that is full of unironic lines by people in my freshman year history class.”

What’s the dumbest thing YOU’VE ever heard someone say?