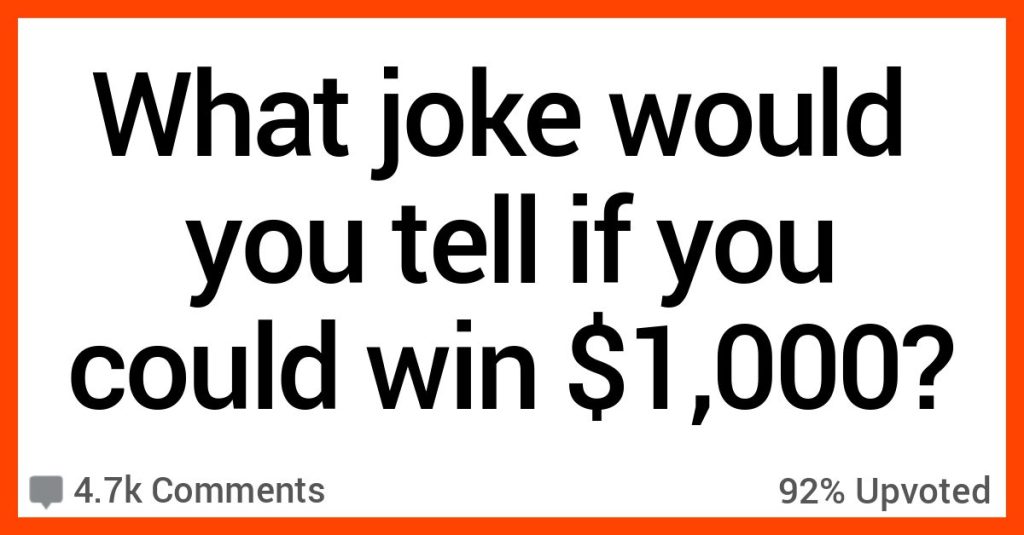 15 People Share the Jokes They’d Tell if They Had to Make Someone Laugh for $1,000

Here’s a scenario for you to consider.

You’re minding your own business in public one day and out of the blue, a stranger offers you some cold hard cash if you can make them laugh.

Think you could pull it off?

You never know, it could happen someday…so you better start brushing up on your comedy, my friends…

He granted me immortality.”

“Have you watched the movie Constipation?

No, what’s it about?

Well, it hasn’t come out yet.”

“When I d**, I want to go out in my sleep like my grandfather.

“Why did the scarecrow get a promotion?

Because he was out standing in his field.”

“What’s the difference between a dirty bus depot and a lobster with breast implants?

One’s a crusty bus station and the other is a busty crustacean!”

“I once submitted 10 puns to a competition to see which one would win.

“The Dalai Llama walks into a bar and exchanges greetings with the bartender as he sits down to order.

“What can I do for you, your Holiness?” says the bartender.

Smiling, the Dalai Llama responds, “Can you make me One with everything?””

“Why was the cross-eyed teacher no good?

She couldn’t control her pupils.”

“Did you hear about the blind kid who fell down the well?

He couldn’t see that well.”

“A man was drinking, obviously way too heavily, in a bar one night. The next day he returned to the bar sat down and ordered a coffee. The bartender snickered and asked,” are you sure you don’t want another shot of whiskey?”

Holding his stomach the man replied,” no, please, I drank so much last night that I went home and blew chunks all night long.” The bartender said, “see what happens when you drink too much, you end up throwing up all night.” The man replied.” no, you don’t understand, chunks is my dog”.”

“What do you call someone who is dyslexic and an atheist?

Someone who doesn’t believe in dog.”

“I got a hand job last night from a blind girl.

A moth walks into a podiatrist’s office.

He says “Doc, I’m not doing so well. My wife, Mrs. Moth is thinking of leaving me, my son Julio Moth h**es me, my daughter Cindy Moth is a failure, and my boss Gregory Linovich is an evil person who feeds off my very demise. You see, I work at a factory and I’ve been at the place for 20 plus years. Everyone in my rank has gotten some kind of promotion or recognition besides me.

It has been the same never ending hell of a rut for a mere two decades! Two I tell you doc! By god, when I lay down to rest my tired eyes after a long day of welding and clanking, and operating, and steering, and weeping- I not once but twice a night look over to my bedside to find a gun. A gun lying beside me just waiting for me (a lonely man) to finally end the charade to which I keep living on and on- repeating the vicious cycle I call my life. Doc, I am depressed!”

“Well, Jesus!” Says the Podiatrist. It seems like you need some serious help! But I am a podiatrist. What you need is a psychiatrist to help you!”

“So what the hell are you doing in here?” The Podiatrist asks.

“Because” the moth exclaims. “Your light was on.””