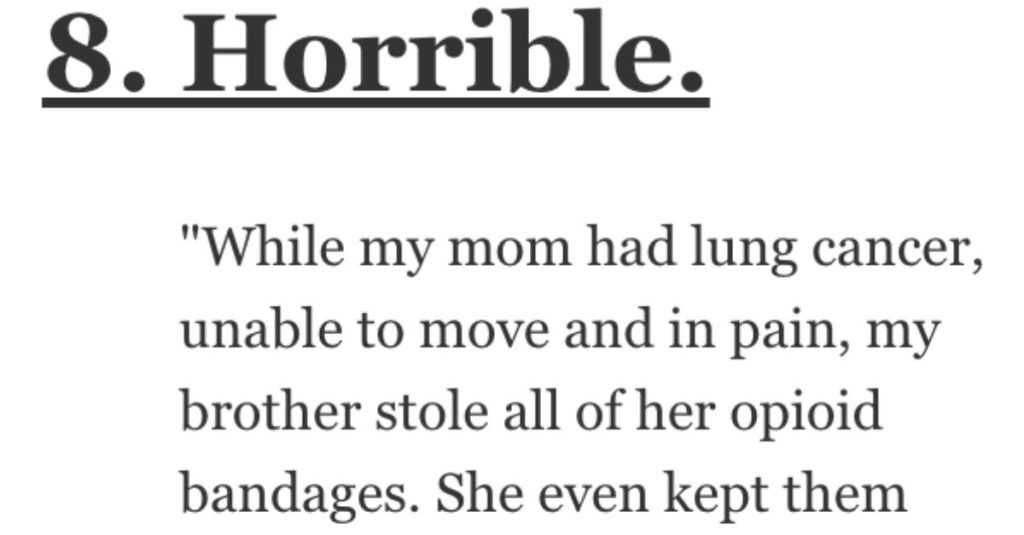 What’s the Worst Thing One of Your Siblings Ever Did? People Shared Their Stories.

I have four siblings and I’m happy to report that, while we’ve definitely had our disagreements over the years, no one ever did anything too crazy or over the top.

But the fact is that there are tons of people out there who have to put up with, well, sh**ty brothers and sisters.

Folks on AskReddit talked about the messed-up things their siblings did.

“My sister and I are 15 years apart. I was an accident, and her teenage self was super pi**ed I was born.

She basically spent every waking moment of her teens being pi**ed I was alive, siphoning resources and attention away from her. She never paid me a moment’s attention, and I remember her kicking me at the age of 19. Anyway, she moved out of my parents’ house to get married at 24, and I was not allowed inside her new house for the next two years.

When I finally got to visit the house, she turned her back and walked away from me when I crossed the threshold. I’ll never forget it.”

“My younger brother is narcissistic.

I don’t remember what the reason for the fight was, but we blew up at each other the night before my 18th birthday and he managed to get on top of me and choke me.

He got kicked out after that”

“My brothers (half brothers, they have the same father but I have a different father) are a bit older than me. One day they were both sitting on our dock fishing. The oldest brother picked up a knife out of the tackle box.

They were about 12. It was a brand new knife of some kind specifically for ki**ing or cooking fish or something. He looks at my other brother and goes “Hm I wonder how sharp this knife is” and without hesitation he literally stabbed it into the top of the middle brother’s thigh.

Totally casual about it like no big deal that the knife was in deep enough to STAND UPRIGHT by itself.”

“He pushed me into the sliding glass door because I didn’t know if the phone had rung or not.

After about 5 minutes of him yelling about the phone I snapped and said “just leave me the f**k alone.”

And his response was to shove me. Cracked the glass and everything. For reference, I was 12 and he was 23.”

“My younger brother threatened to m**der me and my mother with a hammer he found after he couldn’t find a bat. He started a countdown from 10.

Thankfully, since he’s had major blowups most of his life, I’d begun recording them shortly before this one. We’re alive and he’s in jail.”

“He threw a fit and broke his phone when my parents didnt give him money for ci**rettes and beer. He was 36 at that time.

He constantly cheated his then fiance out of money, enabled his two kids from a previous marriage to be awful kids, then had two more he couldnt raise with another woman.

“My brother attempted to ruin my life because I wouldn’t stay quiet about our father being a p**ophile.

He rallied the family to harass me into silence.”

“While my mom had lung cancer, unable to move and in pain, my brother stole all of her opioid bandages.

She even kept them under her pillow, so no one could have access to them. He would bend to kiss her, and sneak his hand under to grab them.”

“My older brother once sat on me and mummified me with Duct Tape and then left me outside in 30 degree weather while he played PS2 with headphones on.

He taped my hands and feet together first and then the rest of me. I couldn’t even fight back.

I was left that way until our mom got home a few hours later and grounded the s**t out of him.”

Here’s the truly messed up thing: the rest of the family was surprised it wasn’t worse.”

“He married a girl. Wedding had a lot of “f**k-you”s to our family in it, but aside from those, announced at the wedding, “We’re pregnant!” Turned out, about 4 months at that point?

They had the baby.

1 month later he announces, “It’s too much, she’s a b**ch, I can’t take this, I’m leaving and going to move in with a friend from work.”

Turns out friend from work is 8 months pregnant at this point with his next kid.

By some miracle he doesn’t leave that girl when the baby is born, but gets her pregnant again, about as soon as is possible. I don’t know if she wises up, or something else at that point, but baby-mama #2 kicks him out then.

Now he lives in my parents basement, refuses to ‘drive an hour to see his kids cause what good is that?’. One of those kids he spent their first month of life with and has seen about a dozen times since, the second I think he spent the entire first, call it, 10 months of their life together till Mommy was knocked up again and hasn’t seen since, and the third he’d never seen.”

“He and his (now ex) girlfriend had a super toxic relationship.

I don’t know the whole story as I was never close with her (and I don’t trust my brother’s account of things), but there was something my brother did once that made me decide, “oh, he’s not just a d**k in a toxic relationship, he’s a manipulative abuser.”

He had his friend text him pretending to be the girlfriend’s best friend. They orchestrated this whole story in which the best friend came on to my brother, but he turned her down because he’s loyal to his girl. He even went as far as to save his friend’s contact info as the best friend’s phone number.

When he showed his girlfriend the texts, it obviously looked like her best friend sent them. She ultimately believed my brother over her best friend because “the phone number doesn’t lie.” Also, my brothers a fantastic liar, so that helped.

Anyway, they’ve been broken up for years now, and the ex girlfriend and best friend still h**e each other. They had been friends since they were 7.

I haven’t spoke to him since he stole money from me to buy weed and denied it until I threatened to file a police report. Last I heard, he’s in a “happy” relationship…. I wish that girl luck.”

Now it’s your turn to speak up.

In the comments, tell us about the bad stuff your siblings did.