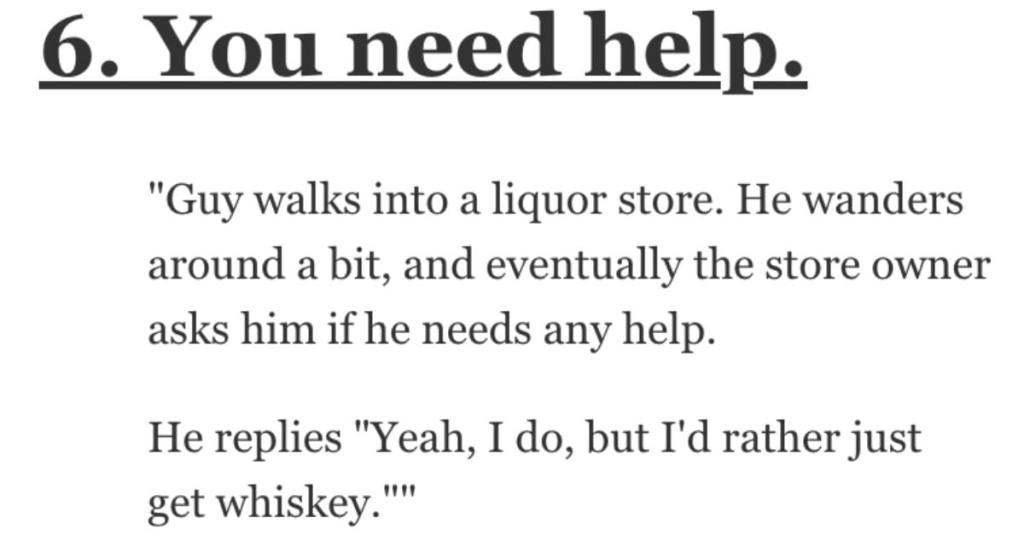 Let’s get funny and let’s get silly, shall we?

And we’re gonna give you a big treat today in the form of jokes that you might not be familiar with.

AskReddit users were nice enough to share their favorite silly jokes with us. Let’s take a look!

“A man finds a penguin at his doorstep.

His friends tell him to take it to the zoo. Later that day, they see him walking down the street while still carrying the penguin.

They ask him “Weren’t you gonna take it to the zoo?” and the man says “I did, now I’m taking it to the movies!””

“What do you get when you cross a scientist with a chimpanzee?

A strongly worded letter from the ethics department.”

“I was walking through a quarry and said to the foreman, “That’s a big rock!”

So I puffed out my chest and shouted: “Look at that enormous rock over there!””

“I was walking home and there was this guy hammering a roof that called me a paranoid b*stard in Morse Code.”

“I got fired from my job at the calendar factory.

“Guy walks into a liquor store.

He wanders around a bit, and eventually the store owner asks him if he needs any help.

He replies “Yeah, I do, but I’d rather just get whiskey.””

“When I’m around my Spanish friends I like to say “mucho” because I know it means a lot to them.”

“How do you spot a blind man in a nudist colony?

“Why did the scarecrow win best employee?

He is out standing in his field.”

“A bear and a rabbit are sitting in the woods.

The bear asks the rabbit, ‘Do you have trouble with sh*t sticking to your fur?’

The rabbit replies, ‘Nope, never have that problem!’

So the bear picks up the rabbit and wipes his *ss with it.”

“A Zen monk opens a tub of margarine, and sees the face of Jesus inside.

He looks to the sky, and shouts, “I can’t believe it’s not Buddha!””

“A penguin is driving his car and it starts overheating. So he takes it to the mechanics. The mechanic tells the penguin to come back in an hour.

It’s a very hot day which isn’t good for a penguin, so he goes to the ice cream shop and orders the biggest ice cream sundae they sell. He’s a messy penguin and gets the sundae all over his face.

An hour later he goes back to the mechanic. The mechanic sees him and says, “It looks like you’ve blown a seal”.

The penguin replies, “nah, it’s just ice cream. But what about my car?””

“My friend had twins last month, Amal and Juan.

When I saw her at the store yesterday she only had a picture of one of the babies on her phone but she assured me, “If you’ve seen Juan, you’ve seen Amal.””

“Did you hear about the wooden car? IT WOODEN GO!

My dad has been saying this since he first heard it know 1982. He promised that it would be the first words that me and my siblings hear when we were first brought into this world.

He LOVES that joke, and he’s laughed at it with the same wheezy laugh ever since. I’ve grown to it too.”

In the comments, please share some funny jokes with us.

Let’s see if you can make us laugh!