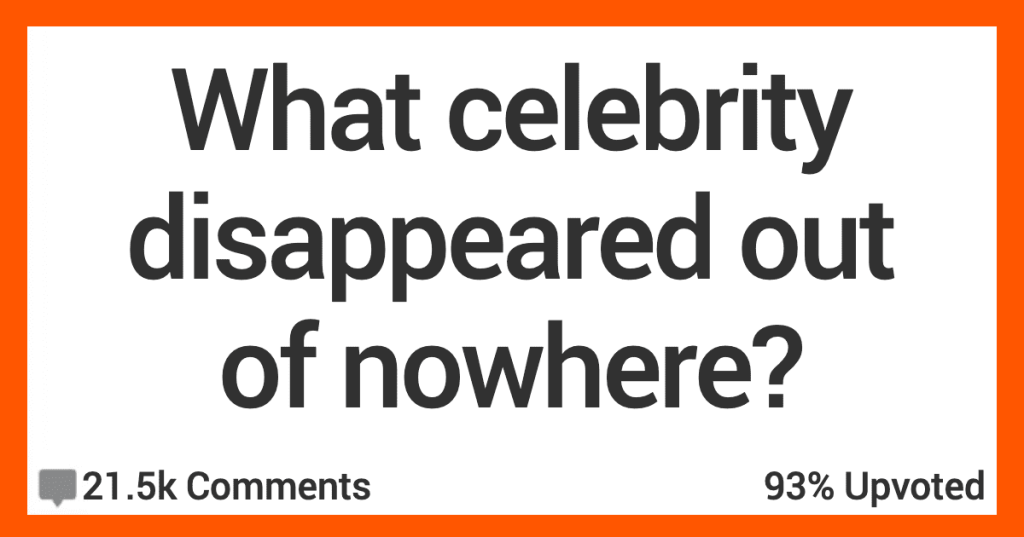 15 People Talk About Celebrities Who Disappeared Out of Nowhere

Sometimes, it seems like celebrities vanish into thin air.

One day, they’re all over your TV screen, and then, BAM!, they disappear…

And today we’re going to hear from people on AskReddit about who they think fits into this category.

Still working on Mambo No. 6…”

He had an illness I think. He recovered but looks 20 years older than he is.

“Jason Lee from My name is Earl.

He moved to Denton, Texas and does photography now.”

“Meg White from The White Stripes.

Jack White has his own label and is successful with his own music.

When asked about Meg, he said she doesn’t really enjoy publicity.”

She literally made amazing music, made a fortune then swerved the limelight to live peacefully in her castle.

He was really big after Pearl Harbor.”

The girl from the American Pie and American Beauty movies…and the Teenage Dirtbag video.”

After his wife d**d, he dropped everything so that he could focus on raising his children.

I think he’s on the record that he made so much money doing Rush Hour 1,2, and 3 that he basically said “f**k it” and retired.”

She had her daughter enrolled in ice skating classes at the rink I worked at in the early-mid 2000s.

She’s just been living a normal life it seems.”

Apparently she reported harassment and was dropped from the show soon after and hasn’t worked since.”

If I remember correctly, being famous messed with her head so she deliberately put the brakes on her career.”

He was in everything…. Then he just…. Went away…”

From what I’ve gathered is he just likes being him and not all over the place. Being a teen heart throb is probably stressful enough.

He’s probably just living off Home Improvement checks or something.”